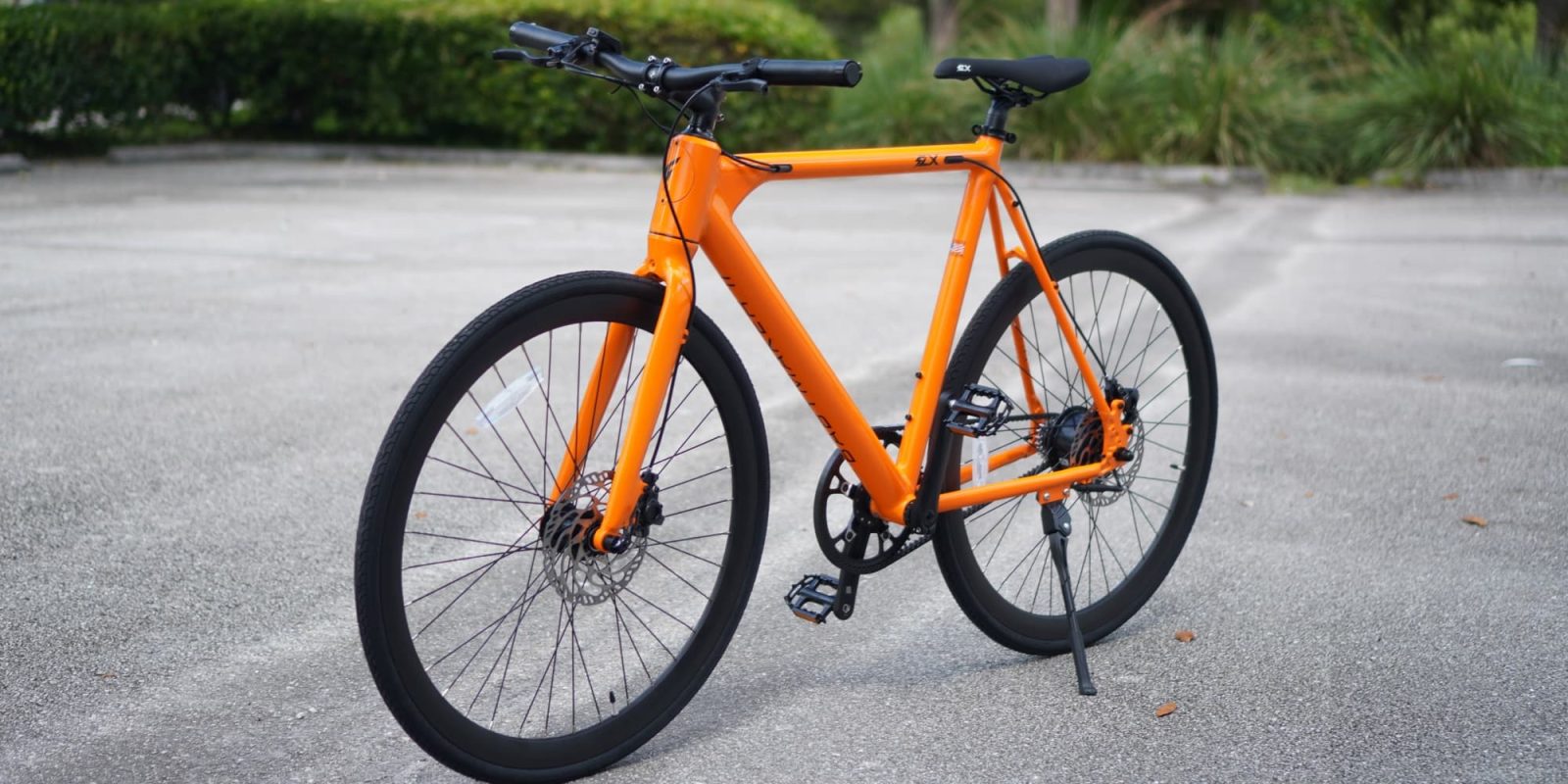 Yeah, I thought the same that you did when I first started covering the Babymaker 2. Here’s a new e-bike from some bike bros that’s got more of a provocative name than actual substance.

But I was wrong. Because after getting the chance to spin the pedals on the Babymaker 2 and put some good honest miles on the bike, I realized that this is actually a very nice e-bike for a certain segment of the population. And not just the keg stand segment.

The Babymaker 2 improves upon FLX’s original Babymaker in several ways.

First, there’s a larger battery that gives over 40% more range by boosting the 36V battery from 7Ah to 10Ah. It also comes with a more powerful charger to fill that pack in just three hours.

The bike also sports fancy parts like a Gates carbon belt drive, a thru-axle for higher strength wheel/axle and improved longevity, and a set of Magura hydraulic disc brakes, which are probably overkill on a 35-pound (16 kg) bike but are very nice stoppers to see included.

There’s a more complete spec list below, just after my video review. And you definitely want to watch my video, right…?

More than a name

It’s hard to look past the name, but let’s try. Because there’s a lot to like here.

The Babymaker 2 is so light and easy to ride that you’d swear it is more powerful than the 350W motor lets on (and the fact that the motor peaks at 500W might have something to do with it). But even with that tiny motor in back, the svelte e-bike simply hops up to speed easily and quickly.

It also does so silently. Every time I hopped on the Babymaker 2, I just couldn’t believe how quiet it was. Between the small motor and the Gates belt drive, there’s just nothing to make any sound. I could barely hear the bike.

I went back and replayed some of the video clips I had recorded while riding, and the only thing I could hear was wind noise. As far as stealthy bikes go, this is it. If a ninja needed an e-bike, this is the one he’d choose.

And speaking of that Gates belt drive, that thing is a beauty. It’s so smooth, so quiet, so simple, and just so perfect. I never have to oil it. I never have to clean it. I can just forget about it and it always works perfectly.

For a commuter bike that I use everyday and want to know I can rely on it even if I’m not the best about keeping up with maintenance, it’s hard to beat. And when you add in those Magura hydraulic disc brakes, the low-maintenance design of the bike is further underlined.

The only downside of the belt drive and rear hub motor combination is that it turns the bike into a single-speed. There’s no such thing as a deraileur for belt drives.

To switch gears you’d either need an internally geared hub (which you can’t have with a hub motor — usually), or you’d need a front gear box, which is a super expensive piece of kit.

Even so, I found that I didn’t miss the gears. To be honest, I usually just leave my e-bikes in the highest gear anyway. I mostly ride in either Florida or Tel Aviv, which are both known for the flat terrain and elevations that can be measured in the single digits.

If you live in a hillier area, then the lack of a low-gear option might be more noticeable. But remember that the electric assist usually makes up for the lack of a low gear by helping you power through those first few pedal rotations that can be a doozy without motor assist.

The front wheel also uses an actual thru-axle instead of a quick release skewer.

It’s still quick release so you can remove the wheel without a tool in a snap, but it’s a stronger axle with a better-quality design normally found on more expensive bikes.

Keep in mind that this is a Class 3 electric bike without a throttle, so if you’re used to throttles, you’ll be disappointed. As much as I love my throttle e-bikes, I must say that I still had a ton of fun riding around on the Babymaker 2 and pedaling up a storm.

Just remember that you’re not going to get anywhere near the advertised range if you don’t keep the bike in pedal assist level 1. They say you can get up to 70 miles (112 km) of range, which is maaaaaaaybe true in level 1 where you’re doing most of the work. But few people will ride this e-bike in the lowest pedal assist power level. If you’re using the higher levels, it wouldn’t be surprising to cut that range in half.

But that’s par for the course with e-bike companies. Most advertise the best-case-scenario range when operated in low power, and very few give you realistic real-world range data for every power level.

The bike now also comes with a ‘logo delete’ option that removes the giant Babymaker 2 name printed on the frame. I don’t have any evidence for this, but I’m guessing they offered that option because there was enough demand from folks that wanted the bike but didn’t want the name plastered on the side for everyone to see.

One last thing I love about the bike that has nothing to do with its nice ride and its surprisingly decent power are the options you get for size and colors. Most e-bikes, especially at this price level, come in a single size. The ones that offer multiple color options usually give two choices. If you’re lucky, there’s a third option. But the Babymaker 2 gives you four color options and two sizes to choose from. For a bike that will be pedaled 100% of the time, multiple size options are important to ensure you fit the bike as closely to optimal as possible.

Does that make up for the lack of included fenders and lights? Ehhh, I’m not sure. As a commuter e-bike, I always feel like those parts should come standard. Even if not the fenders, then the lights should be included as mandatory safety equipment.

You can add the company’s “touring package” to get lights, fenders, a rear rack, a bottle holder, and a phone holder – but it’s going to be an extra couple hundred bucks (and the lights don’t even run off the bike’s main battery). So that’s a bummer in my opinion.

But for $1,749, you’re still getting a lot of good parts here. That Gates carbon drive isn’t cheap. Neither are Magura hydraulic disc brakes, as Magura is one of the highest-quality brands on the market. On the other hand, the low-power Aikema motor and small 360 Wh battery actually are pretty cheap, at least in terms of what they cost the company. And so I could have seen the bike costing a bit less.

Even so, there just aren’t too many e-bikes out there in this category of lightweight belt-drive commuter e-bikes. So if that’s what you’re looking for, the Babymaker 2 is still a good option to consider.

Hyundai, SK On investing $1.9B in US battery factory with 20 GWh annual capacity
Tesla Supercharger is blocked by Mercedes EQS owned by dealer in apparent publicity stunt