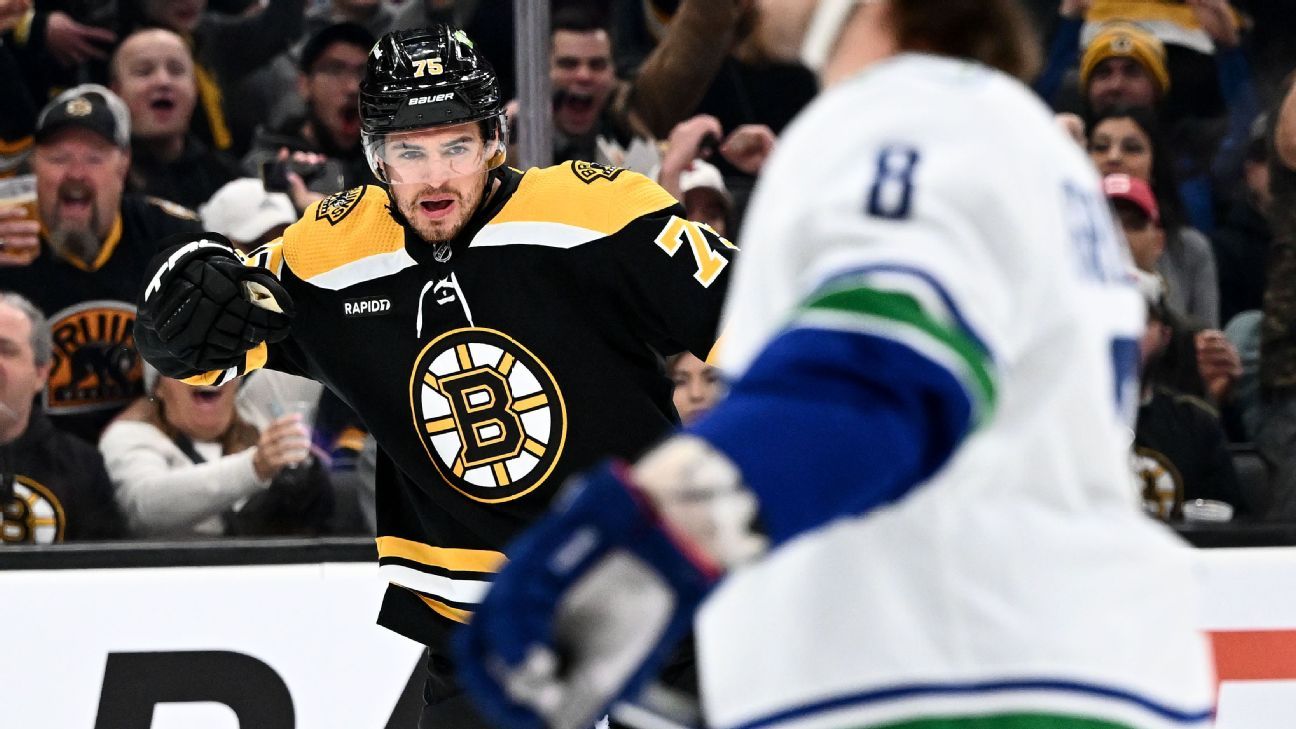 Bergeron had two goals in a 3-1 win at Buffalo on Saturday when the Bruins needed a pair of goals in the third to hold off the struggling Sabres.

“We talked about that. We wanted to have a better start, a better effort. I thought tonight was much better,” Bergeron said.

Hampus Lindholm had three assists and David Pastrnak had a pair of assists, setting up Bergeron and Marchand for one-timers as the Bruins top line led the way.

In addition to his assists, Pastrnak drew a pair of tripping penalties from the Canucks. Late in the first period, he wound up for a slap shot, then slipped the puck to Bergeron in the slot for a tip-in that put Boston up 2-1. Bergeron scored twice Saturday night in a 3-1 win at Buffalo.

Both teams went 2 for 6 on the power play. Vancouver coach Bruce Boudreau said the Canucks gave the Bruins too many chances, including two delay of game penalties on botched clearing attempts and another for playing with a broken stick.

“It makes it an awful difficult time,” Boudreau said. “It seems every time you take a dumb penalty or a needless penalty, those are the ones that are scored on.”

After a give-and-go by Lindholm and Zacha put the Bruins up 3-1, Pastrnak set up Marchand with a crossing pass late in the second for Marchand’s fifth goal since returning from offseason hip surgery.

The Bruins were up 4-1 until Dries scored with a shot from the side of the net made it in 4:34 into the third. Only two seconds remained on a high-sticking penalty to Boston’s Jakub Zboril when the Canucks picked up their second power-play goal of the game. Entering Sunday, the Bruins had killed 12 straight penalties over the previous three games.

Boston’s streak came to an end 9:05 into the first when Miller beat goaltender Linus Ullmark on a breakaway. The Canucks were up a skater as Tomas Nosek served an instigator penalty after a fight with Kyle Burroughs, who had just leveled Pastrnak with a hard hit.

“Every night he brings it. It was so fun to see him go out there and stand up for Pasta and then also get the goal,” Lindholm said.

The fight didn’t last long and tensions continued to build. A.J. Greer laid out Vancouver’s Vasily Podkolzin with a hit at center ice, then both started swinging. Greer landed several clean shots to Podkolzin’s face, which was bleeding as he was led back to the bench to the cheers of Bruins fans. Podkolzin did not return.

Bergeron said Nosek inspired his teammates when he went right after Burroughs following the hit on Pastrnak. He was rewarded near the end when he fired a shot from just in front Ullmark into the net at the other end of the ice.

“You could see on the bench. Everyone was super happy for him. It’s well-deserved,” Bergeron said.