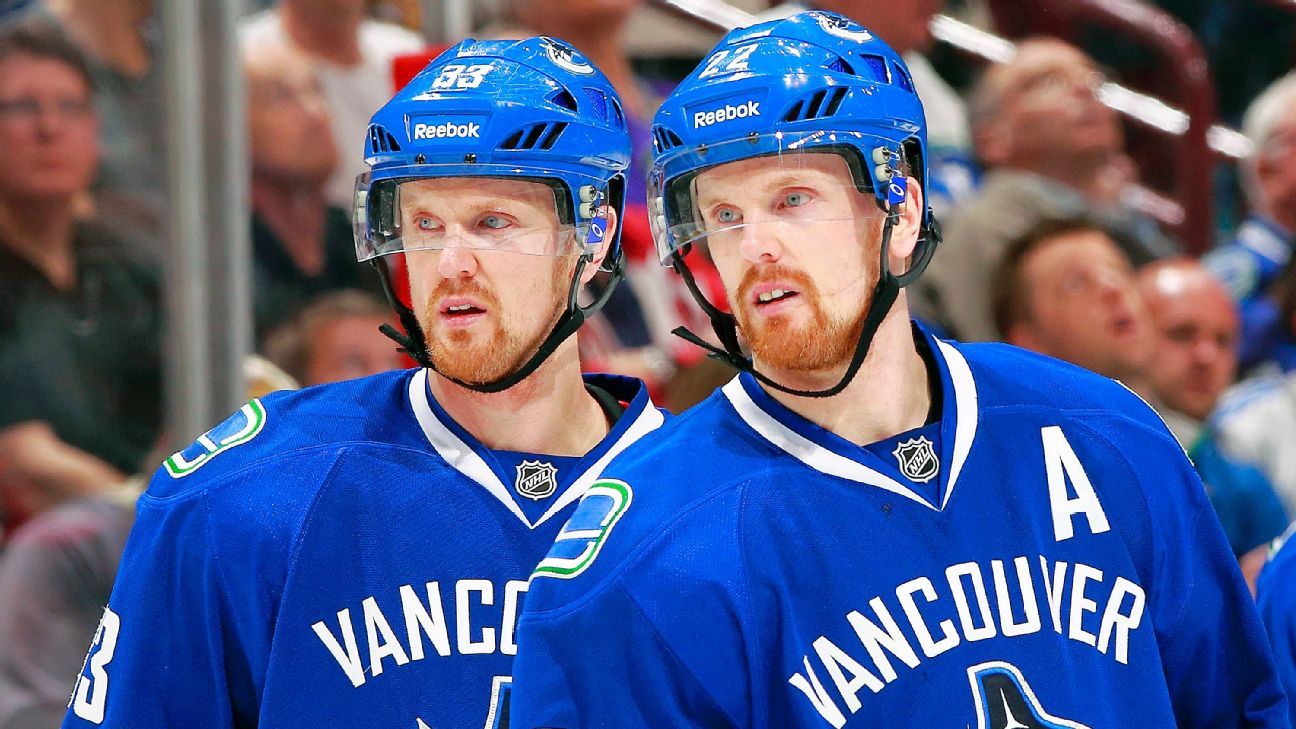 “With Daniel I was barely a 20-goal scorer. Without him, I would have been a career 45-goal scorer.”

Henrik won the Hart Trophy as league MVP and the Art Ross Trophy as its leading scorer in 2009-10. He added 78 points in 105 playoff games that included the Canucks’ run to the 2011 Stanley Cup Final.

“You have always been a calming influence in my life,” Daniel, who spoke before Henrik, said of his brother. “In my mind, you are both a better hockey player than me [and a] better person than me.

“And I’m saying this sincerely, but also knowing that he will stand up here in about 10 minutes.”

“I want to thank whoever it was that selected me to speak first,” Daniel said with a laugh. “It reminds me of draft day.”

Daniel won the Ted Lindsay Award as league MVP voted by NHL Players’ Association members as well as the Art Ross in 2010-11.

“To know that someone would be in the gym every morning waiting for me on the days I felt like taking a day off, that’s what made me the player I was,” he said.

Luongo, who played eight seasons with the Sedins in Vancouver, was drafted by the New York Islanders and retired with the Florida Panthers, but the goaltender’s days on the West Coast paved the way for his enshrinement.

Luongo said that when he got the news he would be inducted, the first thing he asked was if the Sedins would be joining him.

“Wanted it so bad,” he said. “Proud to say that I played with you guys.”

Luongo twice won 40 games with the Canucks and made at least 70 appearances in four straight seasons.

A three-time Vezina Trophy finalist as the league’s top goalie, he finished second in the 2007 Hart voting and won two Olympic gold medals (2010, 2014) with Canada.

“I’ve never been around anyone with the same determination and willingness to do anything to get better,” Henrik Sedin said.

An unknown sixth-round pick when he arrived in the nation’s capital, Alfredsson won the Calder Trophy in 1996 as NHL rookie of the year.

Ottawa’s career leader in goals, assists and points, he captured Olympic gold in 2006 for Sweden alongside the Sedins and guided Ottawa to the 2007 Cup final — a first for a European captain.

Alfredsson paid tribute to former teammates, trainers and coaches, including the late Bryan Murray, but also touched on a cause close to his heart.

“The pressures of hockey for some can become unbearable,” he said. “Mental health issues are a reality of our game. We’re long overdue to finally erase the stigma.”

Sallinen, who wasn’t in attendance, played 16 seasons with her national team, won Olympic bronze 20 years apart (1998, 2018) and is the first non-North American woman inducted into the Hall. She added a silver at the 2019 world championship to go along with six third-place showings.

Carnegie, who died in 2012 at age 92, has often been mentioned as the most talented Black player to never reach the NHL.