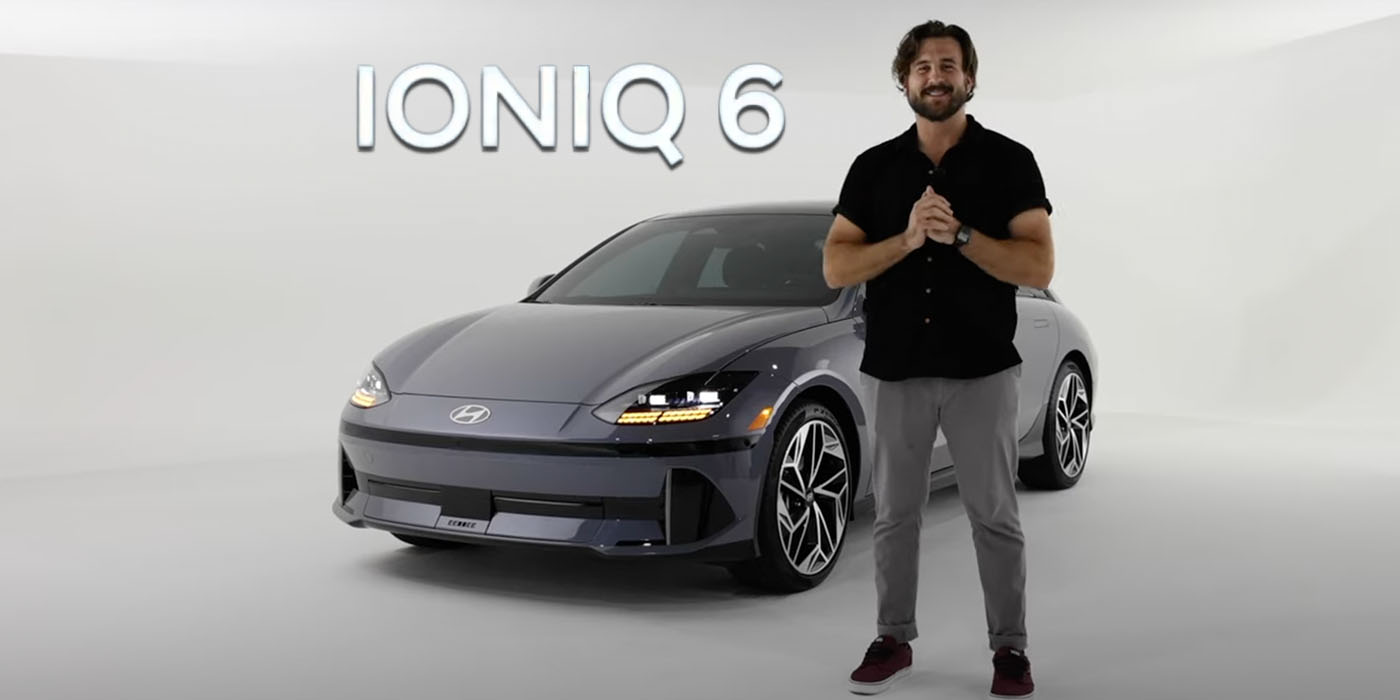 That’s right, we’re back. Back in the studio, back with Hyundai, and back in black transmission blue pearl, the exterior color showcased on the new Hyundai IONIQ 6 you’ll see in the video walkthrough below. While there’s plenty to share in the video itself, we still have additional specs to share while you’re not distracted by the beautiful looks of this all-electric streamliner… and the dork standing in front of it.

Class is in session, folks, but only for a second. Swear. We wanted to start with a quick recap before we dig into our first up-close look at the IONIQ 6 streamliner inside and out.

Ever since Hyundai spun IONIQ off into its own EV-specific line of vehicles in 2020, the 6 has been on the schedule for a 2022 launch following the IONIQ 5 which we did a complete walkthrough with in 2021 and have driven several times since. Amazing EV, but not our focus today.

Hyundai teased first images of its aero-focused sedan this past June, followed by a global debut event in mid-July. The Korean automaker announced it would be moving EV production to US soil in order for EVs like the IONIQ 5 and 6 to qualify for federal tax credits under new terms enacted in the Inflation Reduction Act signed by President Biden in August.

In October, Hyundai shared the targeted range and drag coefficient on the upcoming IONIQ 6, which will arrive as one of the most aerodynamic EVs on the market. There are several exterior features on the vehicle I point out on in greater detail in the video below. As for the targeted range, 310-340 miles (depending on powertrain) is certainly awesome, but we’ll table that enthusiasm until we see the official EPA ranges.

Earlier this week, pre-orders in the EU sold out in less than 24 hours. Today, Hyundai is officially launching the IONIQ 6 in North America following its official debut at Automobility Los Angeles.

As promised, the Hyundai IONIQ 6 made its official debut on US in front of a crowd at the Los Angeles Auto Show this morning. Crowd goers got their first chance to see the unique aero design of this all-electric streamliner up close, much like I did a couple weeks back. Hyundai Motor North America president and CEO José Muñoz commented on the debut:

IONIQ 6 is positioned to compete in highly-visible EV segments that have lots of shoppers with lots of options. The car market is stabilizing and IONIQ 6 fits the image, efficiency and sportiness that compact and midsize car owners want. IONIQ 6 with its interior space, battery options, charging speed and all-wheel drive capability will exceed customer expectations and stand out from the competition.

Today’s debut kicks off a countdown to official sales of the sales of the IONIQ 6 in North America next year and will follow the European market which saw the EV sell out in less than 24 hours. Below are the US reservation and sales details we know so far.

The Hyundai IONIQ 6 is scheduled to go on sale in the US in the spring of 2023 and will also include a pre-order program.

Hyundai says details of pre-orders will emerge alongside official pricing closer to the official sale date, so check back with Electrek for updates on those timelines. As I point out in the video, we surmise the streamliner’s MSRP will start somewhere between $45-50k.

Speaking of video, the time has come! Below is a detailed walkthrough, exploring every inch of the upcoming IONIQ 6 streamliner up-close… including the trunk. Enjoy!

Toyota shows second EV prototype, touting itself as a leader in electrification with beyond zero EV sales
FLX unveils new electric bicycle based on the timelessly cool Schwinn Stingray