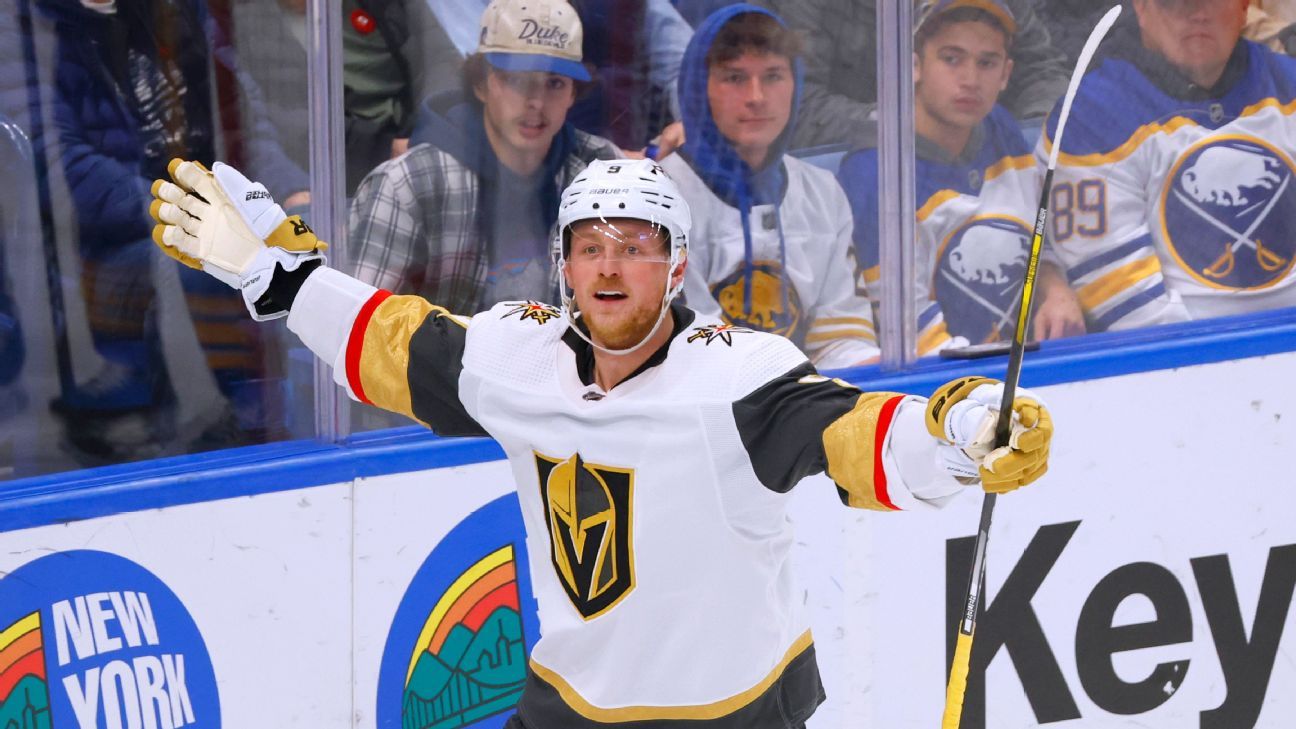 “I think last year I didn’t know what to expect,” Eichel said. “I had an emotional connection — I still do — to this city and these people. I came in this year knowing what I was going to get and the kind of reception. I just tried to use the energy.”

In another era there would have been baseball caps raining down in Buffalo to commemorate three Eichel goals. On Thursday, it was just a few golden domes donated to the ice from Vegas fans in attendance.

“I don’t know if I was [the villain] or not,” Eichel said of his finish. “It seemed like there were a lot of people with Vegas jerseys and gear on here, too, so we had plenty of support. … [The fans] were obviously on me all night. Felt good to get one [initially]. It was a big point in the game for our group.”

His last score was an empty-net tally in the game’s final seconds. Eichel had been stoned by Sabres netminder Eric Comrie on two solo chances earlier in the game and relished an opportunity at the easy goal.

“[You’re] just trying to take advantage of it if you can,” he said. “Obviously, it seemed like [Comrie] had my number a couple of times on the breakaway. So, sometimes it’s easier to score if he’s not in the net.”

The Golden Knights’ previous visit to Buffalo in March was an expectedly emotional moment for Eichel after spending six years with the club that drafted him second overall in the 2015 NHL draft. Eichel was meant to be the Sabres’ savior. Instead, the sides parted on bad terms stemming from a denied medical procedure Eichel wanted to repair a disk injury in his neck that Buffalo wouldn’t approve.

Still, Eichel was admittedly caught off guard by the poor reception fans gave him in March; there were even boos during his tribute video. The center was so rattled that night, he clapped back at fans who’d once applauded him.

“It was the loudest I’ve heard this place ever,” Eichel said in March. “Really. It only took seven years and me leaving for them to get into the game. They must just [have been] booing because they wish I was still here.”

His heat-of-the-moment reaction laid the foundation for Eichel to endure another difficult reception on Thursday. It did include more booing, none louder than when Eichel’s assist on Alex Pietrangelo‘s third-period tally was announced, or when his own goals were noted.

Eichel elicited some cheers, too — particularly when Comrie stoned him one-on-one in the first and second periods. The initial stop was followed by a chorus of “Jack, you suck” chants.

Seeing Eichel face those critics and respond so well was heartening to his Vegas teammates.

“Three goals and an assist in a game like that, where the crowd’s on you like that? That’s one of the more impressive performances that I’ve ever seen,” Knights captain Mark Stone said. “I know people here think he doesn’t have character. But my god, we’ve seen what Jack really is. He’s carrying a big load for us. And for him to be able to do that tonight, I know it’s special for him. I’m almost getting emotional just being a part of it.”