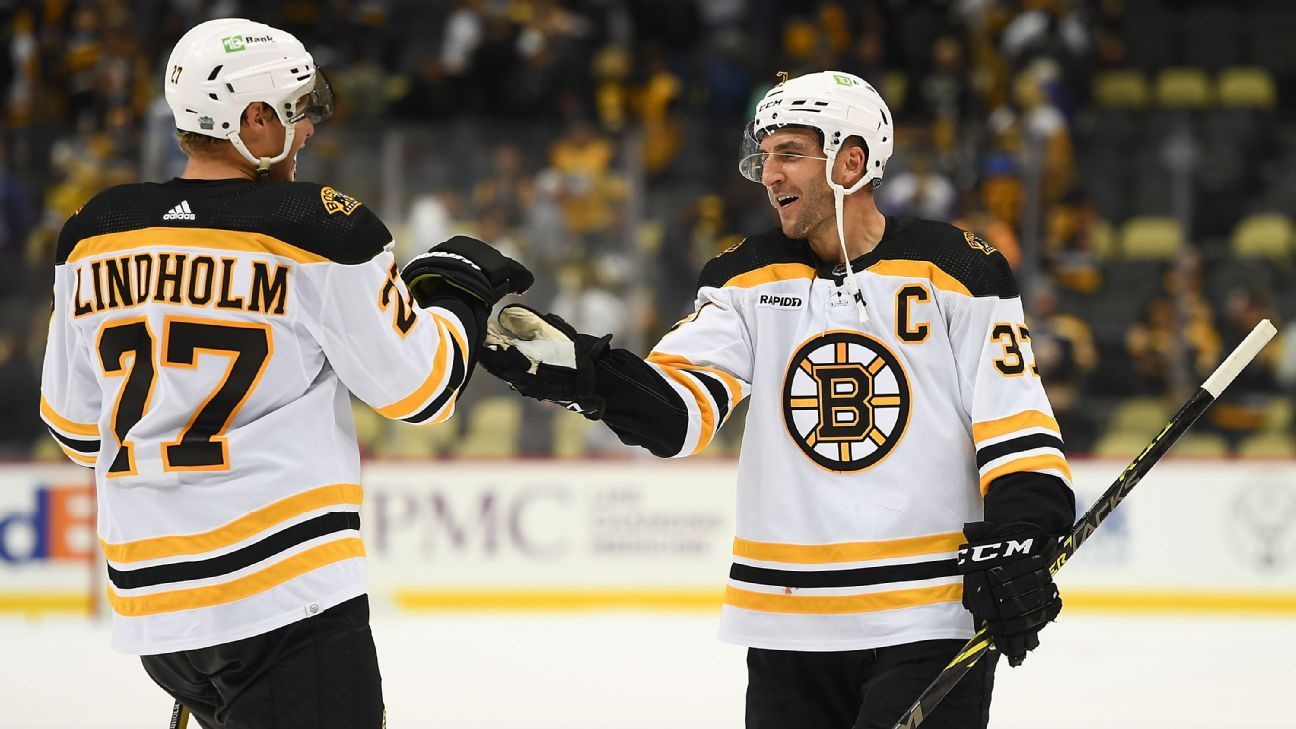 Boston knew it would need Pastrnak playing at his best without Marchand in the mix (especially when Marchand was supposed to be unavailable until Thanksgiving). Patrice Bergeron and David Krejci coming back on one-year contracts wouldn’t be enough to fill the offensive void. So Pastrnak kicked things up a notch, and his timing has been perfect.

Pastrnak’s terrific play not only benefits the Bruins now, but it’s materializing in the final season of his six-year, $39.9 million deal. The 26-year-old will be an unrestricted free agent this summer if he doesn’t reach an agreement with Boston before that. Basically, this is Pastrnak’s moment, and he has taken full advantage.

“He’s a man on a mission, right?” Foligno said. “It’s just the age too. You start to really understand yourself. And I think that’s where Pasta has come to. He’s become a man now in his mindset, his approach to the game. The skills have always been there but when you add the rest, you become more of a superpower and that’s what you see from him. He’s not afraid to trust his instincts. He understands the players he’s playing with, he’s confident in who he is as a person, and I think it’s just coming out in the game.”

Boston could have anticipated Pastrnak’s prowess. The strong start from his linemate Krejci was more in doubt. The 36-year-old spent 2021-22 with Olomouc HC in his native Czech Republic before deciding to come back to the NHL for another season. How quickly Krejci readjusted was a question mark. He turned that into an exclamation point, netting two goals and eight points through eight games prior to being injured on Oct. 27.

Krejci has also been the perfect partner to his other linemate, Taylor Hall. They skated together late in the 2020-21 season, and Hall’s top-end speed complemented Krejci’s playmaking. Absence clearly made the heart grow fonder, because they’ve picked up things seamlessly, reflected in Hall’s own fast start with five goals and nine points in 12 games.

Having Pastrnak as part of that equation too? Who can really call them a “second line?”

Yes, the Bruins have top-end talents. But they haven’t been top-heavy. The difference lies in Boston’s depth.

In the first 12 games, all but one regular forward (Tomas Nosek) produced at least one goal. Multiple skaters were in double-digit point totals or averaging more than a point per game.

While Marchand missed the first two weeks, Boston still rang up the third-most goals in the league (4.14 per game) and the sixth most shots (35.6 per contest). Their dominance continued even without contributions from McAvoy, a high-level offensive defenseman who has paced the club’s blueliners with 27 goals and 146 points in his past 250 games.

Krejci missed time with an injury. Ditto Jake DeBrusk. Boston’s bevy of options left it unbothered by the disruptions.

“We have so much depth, and we’re winning by committee right now,” Marchand said. “It’s hard for teams to sustain the tempo that we’re playing at each and every shift, and eventually we just break teams down and get opportunities. With the talent that we have on each line, we’re going to capitalize. Some teams have one or two good lines, but we have four. It’s showing up when one line has a tough night, [but] another line is stepping up and producing and taking over the game.”

Greer has individually embodied that mentality and become Boston’s surprise standout. It barely registered when Greer signed a two-year, $1.5 million free agent contract last summer. After all, the journeyman entered this season with two goals and eight points in 47 NHL games from 2016-17 to 2021-22. But there was something about the fit in Boston.

It took just four tilts in black and gold for Greer to establish new season-long career highs in goals (three) and points (five). Greer — a Boston University alum, to boot — was so thrilled to score in front of the Bruins’ home crowd he actually kissed his jersey in celebration.

He has also been a healthy scratch some games, reflecting just how many candidates Boston has from which to choose. Greer finds the continuous battle for ice time motivating.

“I think there’s a competitive energy in the bottom six because anyone can play at any given time,” he said. “It’s a competitive setting here and guys push me to be as best as I can every day. So, things have worked out statistically, but I think my game in general has taken just a leap forward as far as consistency and finding what I need to do best in the in the NHL. I’m really happy about that and just trying to build off it every day.”

Foligno has nearly 1,000 more games experience than Greer, but plays a similar role in elevating Boston’s attack. From a mostly fourth-line perch, Foligno managed three goals and seven points in 12 games — already nearing his 13-point total through 64 outings a season ago.

When Boston is healthy, the fight to stay in play intensifies. That’s part of the fun. Newbies and veterans alike want to earn their spot, but leave ego at the door regardless.

“I think every guy realizes how crucial [their contribution] is to this team’s success, whether you’re in or out of the lineup,” Foligno said. “Every guy takes responsibility [because] there’s a guy that’s a pretty darn good player waiting in the wings to come in. So, when you’re in, you want to do the job you’re asked to and when you’re not, you’re itching for that opportunity to get back and just help the group.

“That’s also the mindset and the culture in here. The way that it’s been in Boston is the next-man-up mentality, and you don’t want to let anyone down and I think every guy is really relishing that opportunity that they have here.”

Boston couldn’t replace McAvoy. But Hampus Lindholm sure gave it a shot.

Consider Lindholm’s role in Boston’s wild, come-from-behind victory over Pittsburgh this month. The Penguins had a 5-2 lead in the second period and the Bruins were down a defender after Derek Forbort suffered an upper-body injury in the first. Confronting that multigoal deficit with a depleted blue line was daunting.

Until Lindholm put the Bruins on his back. He assisted on Boston’s next three goals that forced overtime, and then went coast-to-coast scoring the game-winner.

Montgomery called Lindholm “phenomenal” after that performance. It might have been an understatement.

“I can say that I’ve played with good defensemen, and I watch hockey regularly,” Greer said. “And I would say Lindholm is definitely one of the more impactful D-men I’ve seen in the NHL.”

Lindholm’s numbers this season back that up. He ranked third among league defenders with 13 points through 12 games, had an NHL-best plus-12 rating, and averages a strong 24:06 minutes of ice time per game — the bulk of which are played against the opponent’s top forwards.

This is the Lindholm that Boston hoped for when acquiring him via trade with the Anaheim Ducks last March. McAvoy hadn’t had a true top-pairing partner, and the Bruins bet on Lindholm — with an eight-year, $52 million contract signed after the trade — to be that guy.

And so it seems that he could be. Lindholm and McAvoy have skated together in practices, but Montgomery also likes Lindholm with Connor Clifton. That’s the thing about Lindholm — he can work well with almost anyone.

That’s not to say Boston doesn’t miss McAvoy, of course, at even strength and quarterbacking its power play (Boston is at 23.2% — 14th overall — on the man advantage). But Lindholm arguably has been Boston’s first-quarter MVP and is generating Norris Trophy buzz while keeping the Bruins’ back end intact without McAvoy (and more recently Forbort) in their midst.

“It’s incredible how [Lindholm] can get away from guys,” Foligno said. “His poise with the puck, you think he has a play open and then he waits that extra second and a better play opens up. He’s really given us a real footing with Charlie being out and he’s logged a lot of minutes. But just [with] his calmness, his poise — it’s just settled everyone down on the back end. And he’s almost welcoming it; that’s what’s neat about him. He welcomes the extra minutes and the pressure.”

There might be more eyes on Lindholm now than ever before in his career. That includes some of his teammates. Foligno admits he didn’t see much of Lindholm when he was playing out west, and Greer claimed not to know “one thing about him” before they shared a dressing room.

“He’s an insane hockey player, and an amazing person,” Greer said. “I did not know he was that good. And every single night, he just puts on a show. It’s crazy. And he does it so easily. It looks so seamless for him. He’ll play 30 minutes a night and he has the same energy at the end that he had in the first period on his first shift. I think he’s been a great addition and a great tool for us.”

All in on Ullmark

Thomas backstopped Boston to a Stanley Cup that season. Ullmark would like to do the same.

Boston leaned on Ullmark early, and he has embraced being one of the NHL’s busiest netminders. Those league-leading eight victories came with a .929 SV% and 2.16 goals-against average, plus a goals-saved above average of 7.0 (sixth overall). And the veteran won’t be getting a rest any time soon.

The Bruins planned on using its same goalie tandem of Ullmark and Jeremy Swayman that contributed so much to their success last season (not to mention a landslide of goalie hug memes). After Tuukka Rask’s difficult return from injury in January — and his subsequent retirement following four appearances — the Bruins’ crease belonged wholly to then-rookie Swayman and Ullmark to share.

Both are capable starters, meant to be equally involved throughout this season. Then Swayman went down with a lower-body injury on Nov. 1 and was moved to injured reserve (he’s listed as week-to-week). Ullmark immediately inherited increased responsibility — in concert with Swayman’s replacement Keith Kinkaid — to protect the house.

Fortunately, Ullmark’s been up for a heavy workload. And luckily for Ullmark there’s a strong forward group in front of him to generate needed goal support, not to mention that Lindholm-led defense which is top five in goals against to date.

It takes a village, as they say. And Ullmark’s consistency has been foundational to what Boston is building.

How high can these Bruins climb? Stay tuned for the next chapter.