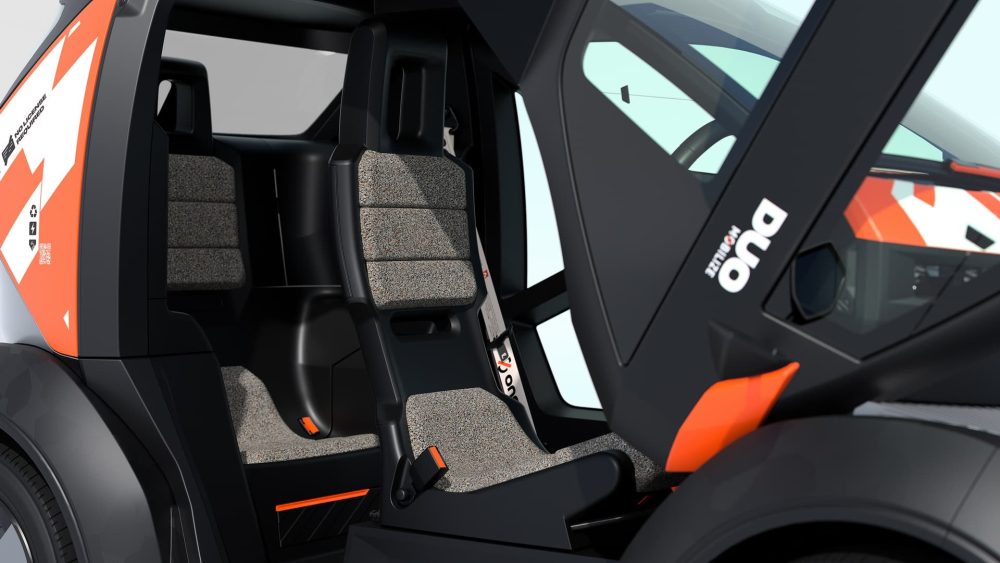 Remember that not-a-car but also not-a-motorcycle four-wheeled electric vehicle known as the Renault Twizy? Now Meet the Mobilize Duo, its successor that will be taking to the Paris Motor Show next week for a big unveil.

Mobilize, the mobility arm of Renault, will launch the Mobilize Duo next year to provide a long-awaited update to the Renault Twizy.

Designated as a quadricycle, the Mobilize Duo rolls on four wheels and offers car-like handling in a smaller and more compact format. Unlike actual cars, though, quadricycyles don’t need to conform to as many strict safety regulations, placing them somewhere in a regulatory sweet spot between motorcycles and cars.

That allows the vehicles to have better safety and weather protection than motorcycles, but hit lower price points (and take up significantly less space) than traditional cars.

While many quadricycles lack more sophisticated safety equipment like airbags that aren’t required of this class of vehicle, the Duo is one of the few to voluntarily include airbags.

The two-seater Mobilize Duo puts its riders in a front-and-back configuration like a motorcycle and comes with a nicer interior than the Twizy did, including padded seats to replace the non-padded Twizy seats. The Twizy was more of a bare bones ride that lacked traditional doors in favor of half-height doors.

The Mobilize Duo has more complete doors that also open upwards, making it easier to squeeze the small four-wheeler into tight parking spots.

The updated ride also features better performance specs and comes in two models, a speed-limited 45 km/h (28 mph) version that has lower licensing requirements for younger drivers, and an 80 km/h (50 mph) version that requires a higher driver license level in Europe.

The electric quadricycle has a range of 140 km (87 miles) and can be recharged either through a home wall outlet or a Level 2 charger.

The Mobilize Duo won’t be available for purchase like the Twizy, but instead will be offered for subscription or long term lease starting at a minimum of three months.

There will also be a cargo version of the vehicle known as the Bento, which will swap a one cubic meter (35 cubic feet) cargo box in place of the rear seat. That model should be more popular for delivery services and fleet operators.

Renault hasn’t released many other specs yet for the Mobilize Duo, but did tell us that 95% of the vehicle can be recycled at the end of its life.

Electric micro-cars and small quadricycles are becoming increasingly popular across Europe, where they enjoy their own regulatory classes. Many urban drivers find that they often provide enough speed and cargo capacity for typical city requirements, yet take up significantly less space and are easier to park.

They are also typically much more affordable than full-size electric cars, though the Mobilize Duo is likely to be especially easy on the wallet with a monthly subscription in the works.

Other electric micro-cars like the Microlino, Eli Zero, and Citroen Ami have all targeted this urban niche with a focus on young and eco-conscious drivers that value a small and efficient vehicle over a status symbol.

What do you think — could you see yourself driving around your city in an electric quadricycle? Let’s hear your thoughts in the comment section below.

Chrysler wants to take on Tesla and attract young urban buyers with transition to fully electric
China’s NIO to compete in Europe with unnamed ‘smaller, mainstream’ brand of EVs after premium rollout