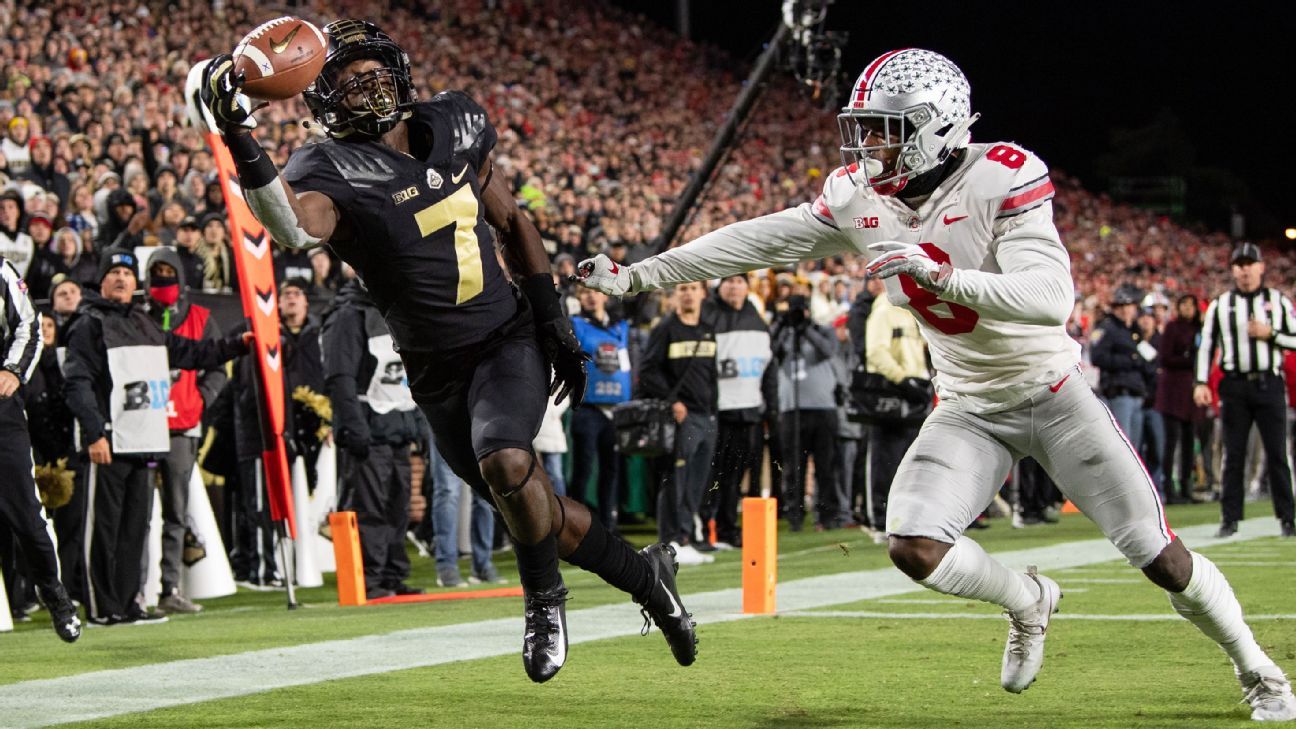 When Jeff Brohm arrived to coach

Brohm credits his approach to his own college coach, Louisville’s Howard Schnellenberger, who was masterful in “getting his team to think that they’re better than they are,” Brohm said, and to believe anything is achievable. Schnellenberger, known for his immaculate mustache and pipe smoking, consistently communicated in ways to inspire confidence, both in the locker room and publicly “so everyone could hear.”

Although Brohm isn’t as bold with his public messaging, his closed-door directives are all about belief, especially in the 24 hours leading up to kickoff. He’ll take the same approach before Purdue takes on Michigan as an unranked, 17-point underdog.

“You can’t be in awe, you can’t lose confidence, you can’t listen to what everyone says and writes, which may be accurate,” he said. “You’ve got to believe that on any given day, if you prepare right and you play aggressive — not timid, not to keep the game close, but aggressive — that you can have a chance.”

Here’s a look at Purdue’s nine wins as an unranked team against the AP No. 1 or No. 2, with input from Brohm and Cory Palm, Purdue’s director of broadcast services, who is working on his second book on Boiler football history.

Iowa had earned its highest AP ranking since 1985 entering the game, after rallying to beat Penn State the week before. But the Hawkeyes were limited on offense, relying heavily on their superb defense and special teams to win games.

Purdue jumped ahead 7-0 and then 14-7 behind quarterback Aidan O’Connell, who ran for a touchdown and threw for another. The Boilers defense then took control in the second half, holding Iowa to 15 net yards on its first three drives before recording interceptions on the next two possessions. Cam Allen had two of Purdue’s four interceptions, and the offense surged behind O’Connell (375 pass yards, two touchdowns) and wide receiver David Bell (240 receiving yards, one touchdown).

“We made plays in the passing game,” Brohm said. “You have to be aggressive in your approach, you have to be attacking. We made them throw the ball more than they wanted, and we were able to get interceptions. That’s not the formula they like to use. It’s running the football, a little bit of play-action, play defense and keep the game close. We got them off that formula.”

Last week, College GameDay told Tyler Trent’s story and showed his love for the Boilermakers. See how much Purdue’s upset win over Ohio State meant to the sophomore and super-fan.

The most memorable night of Brohm’s tenure included an upset against Urban Meyer’s Buckeyes, and also the presence of Tyler Trent, the Purdue student and superfan fighting cancer. Trent, whose story was featured on “College GameDay” that morning, watched his beloved Boilers never trail Ohio State, hold the Buckeyes to six points through three quarters and reach the end zone four times in the fourth.

Freshman wide receiver Rondale Moore had a huge night (170 receiving yards, 58 return yards), along with quarterback David Blough and running back D.J. Knox, while Markus Bailey led the defense with 15 tackles and a 41-yard pick-six in the closing minutes. The 29-point winning margin was the third largest by an unranked team against an AP top-two opponent.

“There was a lot of motivation, not only playing a top team but the Tyler Trent story,” Brohm said, as Trent would die Jan. 1, 2019. “While Ohio State was really good, a couple teams had played it close with them. It was a matter of, ‘OK, how can we take that to the next step?’ We were just aggressive. We changed things up on defense. We had them on their heels a little bit on offense.”

Purdue blitzed Ohio State and showed different looks, turning away the Buckeyes in the red zone. Then, after a relatively quiet third quarter, the Boilers hit the gas with big plays.

“We extended the lead because we stayed aggressive,” Brohm said. “If you’re not going to do that and take chances, you’re going to find a way to screw it up against a good team. You want to make sure your players know, ‘We’re not sitting on a lead.'”

But Purdue had its own future NFL standouts, including quarterback Jim Everett, who completed 17 of 23 passes for 257 yards and three touchdowns. The Boilers had a big fourth quarter, scoring twice off Tomczak interceptions.

“They hung with Ohio State the whole game, and the cherry on top was a Rod Woodson pick-six late in the game that put it out of reach,” Palm said.

Purdue had opened the season by upsetting No. 8 Notre Dame in the first game played inside the Hoosier Dome in Indianapolis. The Boilers also beat Michigan that fall and tied for second place in the Big Ten, but finished 7-5 after falling to Virginia in the Peach Bowl.

Bo Schembechler brought one of his most dominant teams to West Lafayette. Michigan had won its first eight games by a combined score of 352-58. The Wolverines had shut out four opponents, including the previous two before Purdue, and handed Navy the worst defeat (70-14) in team history.

How will Saturday’s top games affect the College Football Playoff chase? What are the current odds for the top four? The Allstate Playoff Predictor has the answers. Check back every week as the odds are updated following that week’s games.

“That one was as big a shock as any of them,” Palm said. “The [Purdue] head coach, Alex Agase, was on his way out, they’d lost three in a row. Michigan, they were looking like world-beaters.”

But Purdue turned to running back Scott Dierking, who logged a team-record 38 carries and rushed for 162 yards against the Big Ten’s top run defense. Michigan scored on its first possession but would score only once more, as Purdue stifled quarterback Rick Leach. Down 14-13, Purdue methodically drove downfield and turned to Rock Supan, a defensive back with 11 tackles in the game, for a 23-yard field goal. He made it and Purdue won after Michigan missed a 37-yard attempt to the left.

It would be Michigan’s only regular-season loss. The Wolverines would rise all the way back up to No. 2 after beating Ohio State later in the year but fell 14-6 to No. 3 USC in the Rose Bowl. Purdue went on to finish 5-6, its fourth straight losing season, and fired Agase.

Notre Dame had won the national championship in 1973, going undefeated under coach Ara Parseghian, and opened the season with easy road wins over Georgia Tech and Northwestern. Purdue lost its opener by 14 points to Wisconsin and then tied Miami (Ohio), missing three field goal attempts down the stretch.

As a result, the Boilers came in as 35-point underdogs.

“Agase spoke about taking umbrage with the fact they were such big underdogs,” Palm said. “They certainly showed up in that game.”

Purdue surged for 24 points in the first quarter, the most ever scored against Notre Dame in the first 15 minutes. The surge included a Purdue fumble recovery on Notre Dame’s second play, a 52-yard Pete Gross touchdown run and a pick-six by linebacker Bob Mannella.

Purdue had a fascinating season in 1960, finishing 4-4-1 but ranking No. 19 in the final AP poll. Six of the Boilers’ nine opponents entered games ranked in the AP top 20, and Purdue twice faced No. 1 teams, falling to Iowa but beating Minnesota, which would go on to win the Rose Bowl and the national championship.

The Boilers surged to a 14-0 lead behind quarterback Bernie Allen, who would go on to play 12 seasons in Major League Baseball. Allen kicked a field goal in the second half and Purdue held off Minnesota. Defensive end Forest Farmer had two sacks and four receptions, earning national lineman of the week honors.

Purdue also beat No. 3 Ohio State and No. 12 Notre Dame that season, while opening with a tie against No. 8 UCLA.

Purdue stumbled into the game at 0-3, while Michigan State was beginning its surge under Hall of Fame coach Duffy Daugherty. The Spartans came in as 21-point favorites over the Boilers, who had several players missing because of the flu. Michigan State held a significant edge in first downs (19-7) and completions (10-2) but lost five fumbles, including one in the second quarter that led to Purdue’s first touchdown.

Go perfect in your bowl picks and win up to $1 million, plus more prizes! Make Your Picks

It was another play in the second quarter that would haunt Michigan State, though. A Walt Kowalczyk touchdown was nullified by a late hit penalty. Rather than correctly enforcing the penalty after the play, officials took away the touchdown and assessed the penalty, leading to a missed field goal attempt.

Daugherty in 1984 discussed the play, saying the official who called the penalty was replacing a more experienced official, who had to leave after his wife had a heart attack. The Big Ten later apologized to MSU for the officiating snafu.

“That call changed the complexion of the game and we probably would have routed Purdue,” Daugherty said.

MSU wouldn’t lose another game but finished No. 3 in the final poll. Purdue would lose only once more, to No. 6 Ohio State, to go 5-4 on the season.

Michigan State had won the national championship in 1952 and came to Purdue on a 28-game win streak, the longest in the nation. The Boilers were 0-4 and banged up, but turned to a fullback named Dan Pobojewski, who had started his career at MSU but couldn’t make the team.

Pobojewski provided the game’s only points, scoring from a yard out early in the fourth quarter.

“I went to school there for two years and wasn’t good enough to make their club,” Pobojewski told reporters afterward. “When I finally scored and rolled into the end zone, I just wanted to lie there and cry.”

Michigan State hadn’t been shut out in 59 games. Purdue was shut out in its next two games and dropped a third, 21-6 to Ohio State, before finishing the season with its only other victory, a 30-0 pummeling of rival Indiana.

Purdue wasn’t known for quarterbacks back then, but Dale Samuels, a first-year starter who stood just 5-foot-9, began to shape the team’s tradition. He completed nine passes for 158 yards and two touchdowns. The Boilers jumped ahead 21-0, but Notre Dame came back with two scores before Samuels found Mike Maccioli for a 56-yard touchdown pass. Notre Dame had not lost at home since 1942.

“The party on campus lasted two days,” Palm said. “They canceled class on the following Monday. There was a pep rally and everybody came out. Nobody was in a learning mood.”

The hangover seemingly impacted the team, as Purdue lost its next six games before finishing with a win over Indiana. The (Lafayette) Journal and Courier reported that 40 million people learned about the outcome through radio or newsreels. Among them: a high school student in Ohio who was an aspiring pilot and engineer. His name: Neil Armstrong.

“He credits hearing those highlights on the radio as one of his first exposures to Purdue,” Palm said. “He graduated in ’55.”