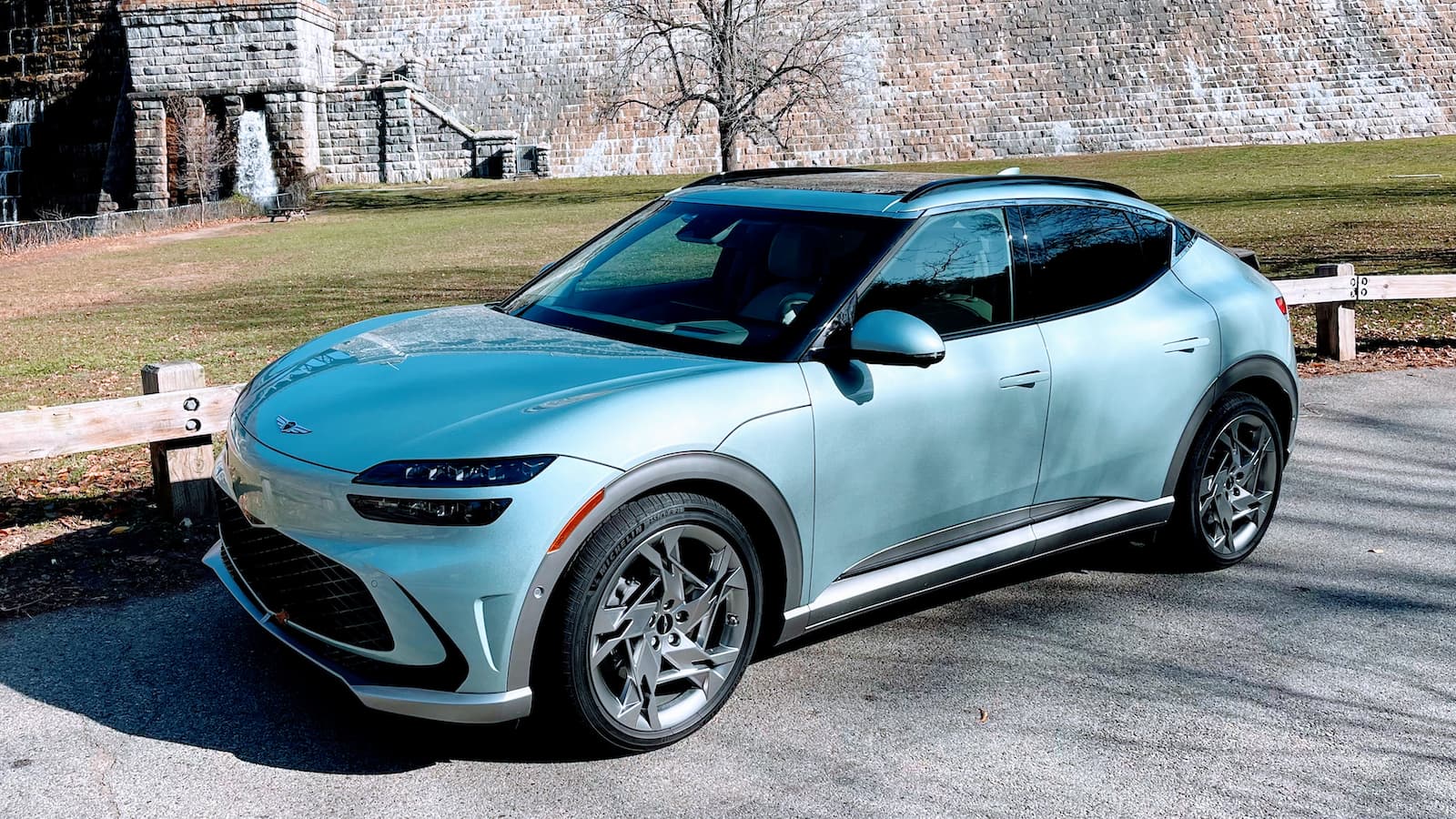 Genesis finally delivered the much sought after GV60 to our home for a week test drive, and immediately I had questions: Wy all of this amazing speed, interesting tech and luxury, but no wireless CarPlay?

There’s a ton to love about the GV60 Performance and probably the best thing is that performance which pushes the AWD from 0-60 in a AWD chirping just over three seconds.

The GV60 also drives like a dream with a soft suspension and almost no road noise. The low center of gravity and big wheels make taking harrowing turns almost fun; this is a drivers car camouflaged as a crossover.

But, as we’ll see in a theme here, there’s a caveat to this performance. The highest level of acceleration must be activated from the “Boost” button on the steering wheel. When you do this the car accelerates for about 10 seconds, the screen turns red, and you get a hyperdrive graphic.

That feels cool, like a Knight Rider trick to show your friends (and I did), but in reality when you really need the boost, like on an on-ramp or during passing, you don’t want to be reaching all over the steering wheel to find a button. It would be much simpler to just have that power delivered through the accelerator. I understand that the “Boost” button is only good for a few boosts within a given time period, and that’s fine – just give me all it can safely deliver through the accelerator without the parlor tricks.

Like I said, that’s a theme here – lots of neat tricks that don’t necessarily enhance the driving experience. Probably the best example of this is the glass orb that turns into the gear shifter. It is quite cool and a conversation piece… for a few days… then it becomes a plain old delay. As in it takes about five seconds from starting the car for it to complete its transition. That’s not a lot of time, but when you want to get in and go, that’s an annoying delay. I wish Genesis had provided a “gear shifter only” mode so I can have those few seconds back.

While that’s happening, I’ve learned to do other things. One neat trick is that the GV60 has a fingerprint reader (sadly not on the steering wheel but in the back of the center console). You can start the car with only your finger, no fob or smartphone app required. But it is also where driver profiles are stored, so you’ll want to finger login while the orb is changing into a gear shifter.

Another thing you are required to do before driving is plug in your phone because there is no wireless CarPlay or Android Auto. Yes, this car that is packed with every available gadget and gizmo doesn’t have the one thing that every car in 2020 should have: wireless CarPlay.

I realize most people want to charge their phone on long drives, and I’m one of these people. But for short drives, I’d rather leave my phone in my pocket or just drop it on the wireless charger (which the GV60 has – for some reason). I hate to say it, but this is going to be a dealbreaker for some.

One thing that’s not a gimmick is the heads-up display which is bright and full-featured and includes your speed, the speed limit, and road variables. I find that a good heads-up display such as this one makes driving a lot safer and easier.

The traffic aware cruise control isn’t anything to write home about. It freaks out when entering a highway without turn signals, for instance. I know you are supposed to use your turn signal to do this, but it is seldom done in real life because it is the only option. I guess the upside is that it teaches the driver to use a turn signal during merging, lest they get basted with alarms.

Forward collision-avoidance assist is also mediocre or perhaps overly sensitive with a few false positives in my experience. I know this is a hard problem to solve, but Genesis didn’t solve it.

The GV60 is a great looking car

I hate to be superficial, but I love the look of the GV60, and I think it is the best looking out of a handsome class of E-GMP platform (Kia EV6, Hyundai Ioniq 5, 6) vehicles. It looks like something that slices through the wind and at the same time carries the whole family – including the dog. Size-wise, it feels like a good mid-sized CUV crossover with plenty of room in the back. Compared to Tesla Model Y/3 and Chevy Bolt:

The frunk, just like on other E_GMP vehicles, is a glorified glovebox but still a good place to stuff a small charger cord or other smaller things you want to hide and mostly forget about. It looks like an afterthought, and I’d expect future models to either have more space or no frunk at all, depending which way customers prefer to go.

I’ve noticed that if a frunk is easy to open and roomy, it gets used a lot. This one is neither, so Genesis market research may come back saying, “No one is using it, scrap it!”

Another weird omission is lack of rear wiper. I’m assuming the idea, like on other rear wiper-less vehicles, is that the wind pushing over the window removes most water. I didn’t have an issue seeing out the back in a slight drizzle, but driving slow in heavier rain wouldn’t be great, I imagine. Also I should note that view-ability out the back window is already very limited. That’s not a dealbreaker for me, but others might not agree.

The GV60 features 24 cubic feet of storage with the rear seat in place and a total of 54.7 cubic feet of cargo space when they’re folded. It has a rear retracting cover that will likely live in the corner of your garage after being removed on the first day of driving.

The back storage area is moderately roomy and well lit – plenty of room for groceries or even a small tuba. There’s not much storage underneath the floor, however. I think there would be plenty of room back there for a medium-sized dog, and I’d feel OK traveling with our 50 pound Husky, for instance.

We already know that E-GMP platform 77.4-kWh battery pack vehicles charge at some of the fastest rates we’ve seen on a kilowatt basis with only GMC’s 200+kWh Hummer seeing higher speeds. I didn’t get to check out the high speed charging speed first hand because the local chargers top out at 150kW, but many others have seen 270+kW, so I’ll trust their experience. The GV60 is able to go from 10% to 80% of charge or 165 miles in just 18 minutes.

The problem here is that with the high performance 430 horsepower motors and huge wheels, the GV60 Performance only sees about a 235 mile range, and my testing confirmed this. The 314 horsepower “advanced AWD” version sees a slightly better 248 mile range.

That means that while charging stops will be quick, they will be more often on longer trips, especially compared to a 300+ mile range of its EV6 or Ioniq 5 siblings. Again this isn’t a dealbreaker, and 235 miles is plenty for the occasional road trip, but something to add to the buyer’s math.

Reading over this review, it feels like I had a lot of complaints, but really I enjoyed the GV60 quite a bit. It is about as fast as you’d ever want a CUV to go at just over three seconds 0-60. It handles the street incredibly well with almost no wind noise and great balance. It charges quickly and has a lot of admirable tech like the heads-up display, and it is packaged with a luxury interior. It also looks dope.

Yes, I had quibbles, in order of importance: the lack of wireless CarPlay, 235 miles of range, rear visibility, and quirky gadgetry. But for most people, none of those are dealbreakers and, if you can find (an extremely limited supplies) one, I think most EV buyers will love this car.

Despite more than a million riders, Paris may ban rental e-scooters
The US’s largest solar provider reveals its fleet of Ford F-150 Lightnings