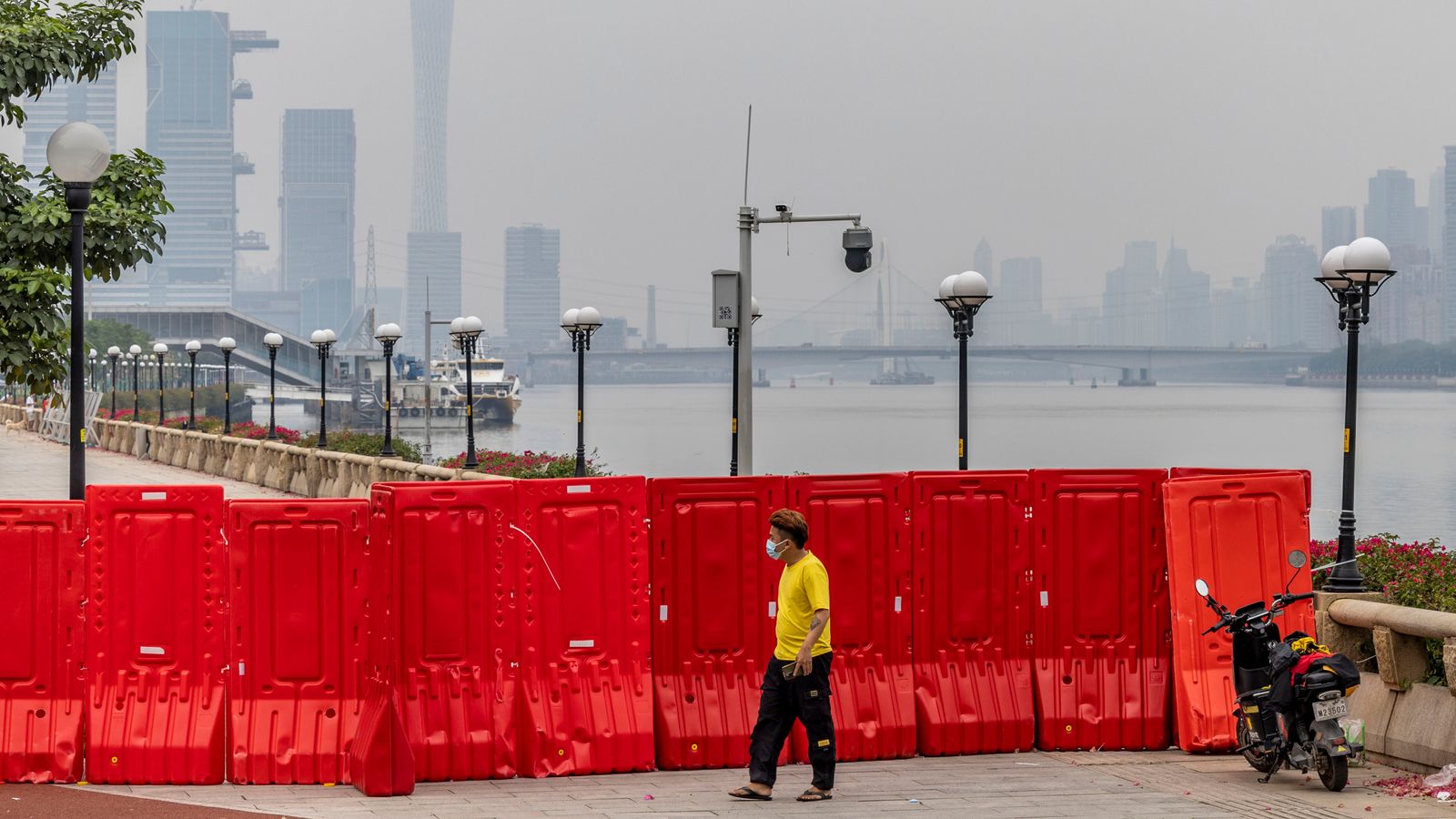 The main roads that run into the district of Haizhu stood almost silent this morning.

While such arterial roads would usually be teeming with traffic, there were just a handful of cars.

The reason for that was the big red barricades blocking the four-lane dual carriageway. Just a few cars made it past. Ours, along with most others, were waved away.

Beyond is a district in lockdown, home to the vast majority of Guangzhou’s COVID cases.

The city is responsible for around a third of China’s total infections.

Read more: COVID-19: ‘Situation is getting worse across China’

Using another route, we were able to get closer, right up to a blue-fenced cordon.

This area was, unexpectedly, a hive of activity.

People on mopeds slung extra supplies over the barriers while others stood on bollards to peek over the top, calling out to friends on the other side.

A community volunteer truck filled with food was permitted to drive in.

People stuck inside are allowed to leave their homes to buy food and get tested, but all other shops are closed, as are schools and offices.

It’s been this way for nearly a month and there’s a sense people are tired.

One man waved at us from behind the barrier and said: “Film my hands reaching out for freedom.”

“The Government told us that lockdown would last three days. Then after [that] three more, then three more, and now three more,” he said from behind the corrugated iron fence. “We are frustrated.”

And although there are no reports anyone is going hungry, as happened in Shanghai earlier this year, he added: “Most supplies are in short supply because many places are locked down and people cannot move freely.”

But there is a sense a health crisis might well be under way. Cases are on the verge of hitting the highest numbers that have been seen at any point during the pandemic and the authorities have reported deaths for the first time in six months – three people in the last two days.

Across town a massive hospital is being constructed, a grim sign of what might be to come.

The government, it seems, is aware of the costs. It called last week for measures to be “optimised” to make the response more targeted and less blanket.

Some cities began experimenting with winding back mass testing.

But when faced with surging cases, under-pressure local leaders seem to be turning to the familiar playbook of closure and control.

In Guangzhou city centre, for instance, there are far fewer cases, but bars and restaurants have been ordered to shut.

Ms Chen, the manager at the How Rich bar, told us that they got the news just as they finished putting up their World Cup decorations. She says that even though she supports the policy, she was disappointed.

“The impact on our business is no earnings. We cannot work normally. Like an old saying says: ‘Stop working, stop eating.'”

Getting out of zero-COVID was always going to be incredibly difficult. There is a narrow line between testing and lockdowns, or cases and deaths, in a population with such low levels of immunity.

What’s clear is that zero-COVID will be tested in the coming days and weeks, as will the government response.