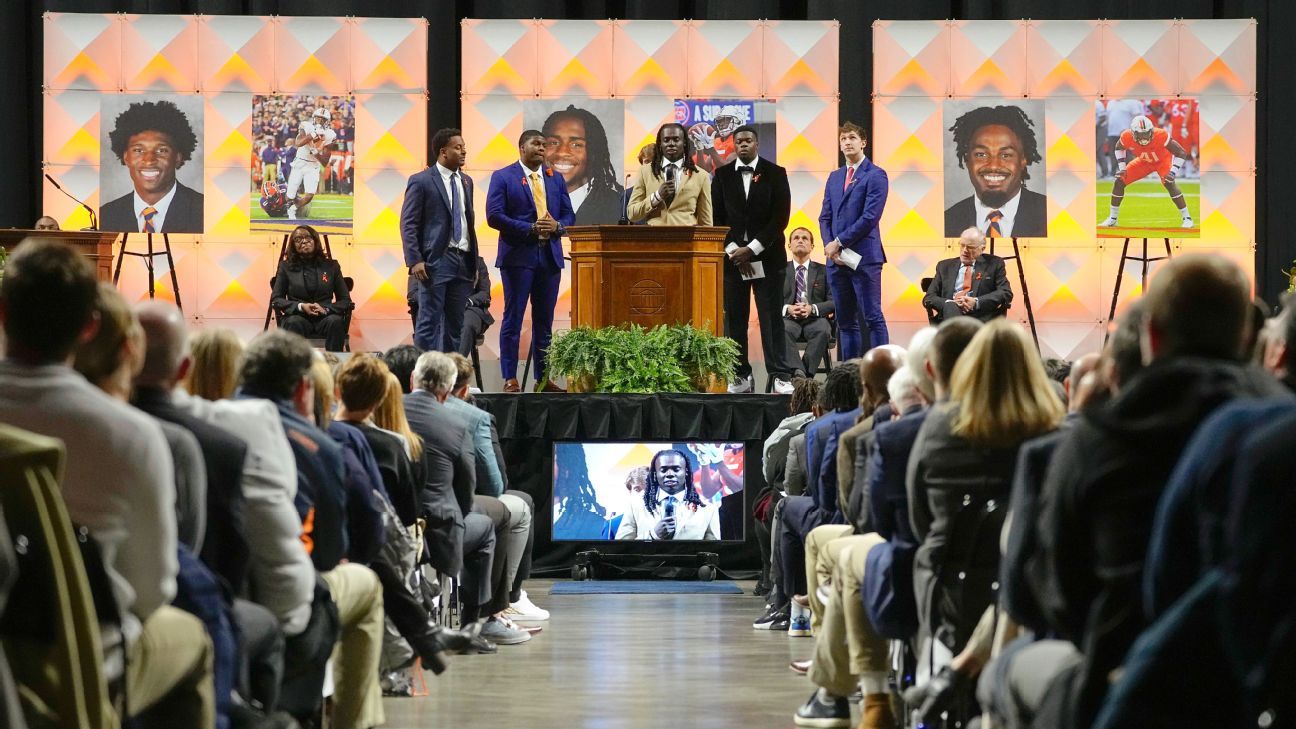 Nobody at the memorial mentioned the way Chandler, Davis and Perry died. Rather, they focused on the way they lived.

Williams shared stories that their families told her. Chandler was known as “Devin the Dancing Machine” to his family. His uncle showed her a video of 10-year-old Devin arriving at track practice early, getting out of the car and “proceeding to put on a one-kid dance-off in the parking lot. His rhythm was suspect, but his confidence was never in doubt.”

Whenever Davis went home, he wanted his grandmother to cook for him.

“He especially loved the 18 scrambled eggs she would make for him,” Williams said.

As for Perry, when he was 6, he wanted to be a red Power Ranger for Halloween. His parents bought him his costume, and he didn’t take it off until after Thanksgiving — a story that drew a chuckle from the crowd of 9,075, which included former Virginia coach Bronco Mendenhall, ACC commissioner Jim Phillips and a large contingent of former Cavaliers football players, including Chris Long and Heath Miller.

Video montages of each player, featuring highlights and interviews, were shown before players took the stage to say a few words about their fallen teammates. The memorial was the first opportunity for players to speak publicly about their teammates.

Virginia linebacker Chico Bennett Jr. paused multiple times as he spoke about Davis, his big smile and the way he would passionately defend his side in any argument.

“The grief, the loss, the heartache, the loss will never be gone,” Bennett said. “Now we just learn how to manage it. But rather than being sad, I’ll remember the smile and do right by you and continue to chase our common dreams of graduating and continuing our football careers. Oh, what I would give to see that smile of yours just one more time. Unfortunately, I cannot, but I know you are smiling up there and so far that I will do the same down here. I love you, little brother.”

Others told funny stories as a way to honor their teammates’ memories. Cornerback Elijah Gaines described Davis’ love for his hometown of Ridgeville, South Carolina, a small community less than an hour from Charleston. Gaines came to Virginia from New York — a city many, many times larger than Davis’ hometown.

Safety Donovan Johnson wanted to share humorous stories about Perry because of the sense of humor he had.

“He liked to get me on the field,” Johnson said. “We were doing scout, and this was maybe early in the season and I didn’t get the call. He gave me the wrong call and Coach looked at me like, ‘Bro what are you doing?’ So later in the season, he asked me what the call was. I was like, I got him. I told him, ‘You’re blitzing.’

“So as the play went on, he walked up and he noticed he wasn’t blitzing on that play and then he looked over at me. ‘Bro, don’t ever do that again.’ I was like, ‘Got you!'”

Kicker Will Bettridge was especially poignant in talking about Perry, as the two played together in youth football, high school and at Virginia.

“You were a role model to me, and a mentor to me as I watched your every move and I wanted to be just like you,” Bettridge said. “You were a rock star in the community, giving back and helping others and doing everything for everyone before yourself. Your presence was felt each and every day I was able to share it with you. You were the first one to be there with me after a make or a miss. Your outlook on life never changed.

“I strive to be like you in many ways, your work ethic, your compassion, your mindset, your loyalty. The world would be a better place with more people like you, D’Sean.”

Running back Cody Brown echoed similar thoughts about Chandler in a letter he wrote to him.

“You lit our lives up like a shining star in the sky. You had a special gift when it came to talking to people, making them laugh, making them feel loved. It didn’t matter if it was someone you didn’t know at all, you could talk to them like you knew them for years,” Brown said. “Your joy for life was contagious and you made them happy. You were always true to yourself — it was your world and we’re just living in it.”

Elliott closed the program with remarks that leaned heavily on his faith, and promise for brighter days ahead.

“To everyone here I say, we will turn today’s tragedy into tomorrow’s triumph,” Elliott said. “We have a mission going forward and that mission requires a tremendous amount of responsibility. Amidst the pain and suffering there is hope. Weeping is going to last for the night, but great joy is coming in the morning. Because of 1, 15, 41, we have the responsibility to rebuild this community and program on the legacy of their stars, and do so in such a way as to bring light unto the world.

“Lavel, Devin, D’Sean, I’m so looking forward to the strength, motivation, courage and love that you all will provide as we triumph in the days ahead. My young kings, may you celebrate in paradise, and we will celebrate on this side each and every day with the light of your stars.”