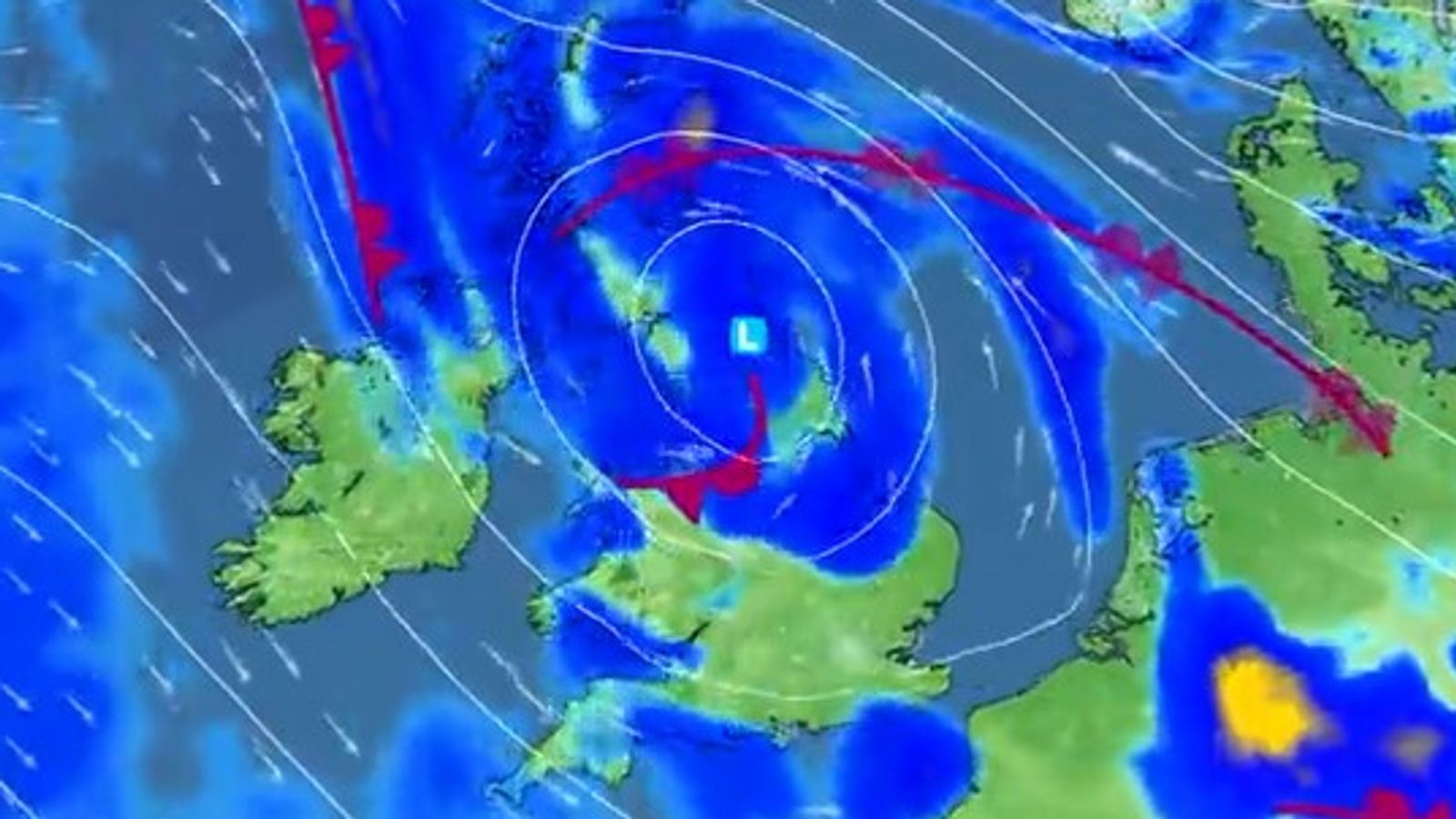 The UK is facing “atrocious” weather conditions with three yellow rain warnings issued for large parts of the nation.

Heavy downpours in Cornwall and Devon are expected to travel north-eastwards across England and Wales, before reaching Scotland’s east coast by Friday.

Up to 40mm of rain could fall in the South East, with the first yellow warning in place until 6am on Thursday, stretching east across the coastline from Southampton and the Isle of Wight in Hampshire to Kent.

Click here to check the weather forecast in your area

A second yellow warning has been issued for 24 hours from midnight on Thursday from Birmingham, Lincoln and Hull to north Wales, Liverpool and Manchester and northwards to the Scottish border.

The third warning is in place ahead of a two-day spell of “persistent” rainfall expected in the east coast of Scotland, from the English border to beyond Aberdeen, from 3pm on Thursday until 6pm on Friday.

Up to 70mm of rain could fall over high ground, with up to 100mm possible across the hills of Angus and Aberdeenshire, the Met Office said.

Strong gusts of wind are set to batter coastlines, while deluges bring an increased risk of flooding.

And the “miserable” conditions could be exacerbated by temperatures returning to their average for November, making frost more likely.

Western Britain is likely to bear the brunt of the icy weather, but sub-zero temperatures forecast for Friday night mean frost is expected to be more widespread.

Met Office spokesperson Craig Snell said: “The warning areas are where we are most concerned about the risk of flooding – but it doesn’t mean that the areas outside them are not going to see some pretty atrocious conditions.”

The Midlands and north of England will battle “pretty miserable” conditions on Thursday after the rain sweeps in overnight, Mr Snell added.

“The rain will be accompanied by a brisk wind, so it’s not going to feel good.”

Snow is also forecast in the Highlands, although this is not unusual for November, Mr Snell said, adding: “If you want to take a walk in the hills in Scotland tomorrow you may come across snow, but for the lower levels it is just going to be rain.”

More than half a month’s rain, 47mm, has been recorded in the past 36 hours in the village of Iping near Chichester, West Sussex, where up to a further 30mm of rain is expected until the early hours of Thursday.

A further 95 flood alerts have been issued across the country, across the south coast and in central and northern regions.

The EA said local flooding is “probable” from rivers and surface water in southeast England into Thursday, and “possible” across London and the South East.

There are three flood warnings and eight alerts in Scotland.

“The chances of being involved in a collision rise dramatically in wet weather, and even more so if there’s snow, so it’s vital drivers slow down, leave plenty of space behind the vehicle in front and use their lights to make sure they’re easily seen by other road users,” he said.

“The risk of aquaplaning, where a vehicle’s wheels lose contact with the road as they skim across standing water, will be high – particularly for those who don’t slow down to appropriate speeds for the conditions,” Mr Dennis warned.

Deaths of 31 people in worst ever Channel migrant disaster to be investigated by French government
Katie Kenyon: Man jailed for murdering mother-of-two with axe and burying body in forest