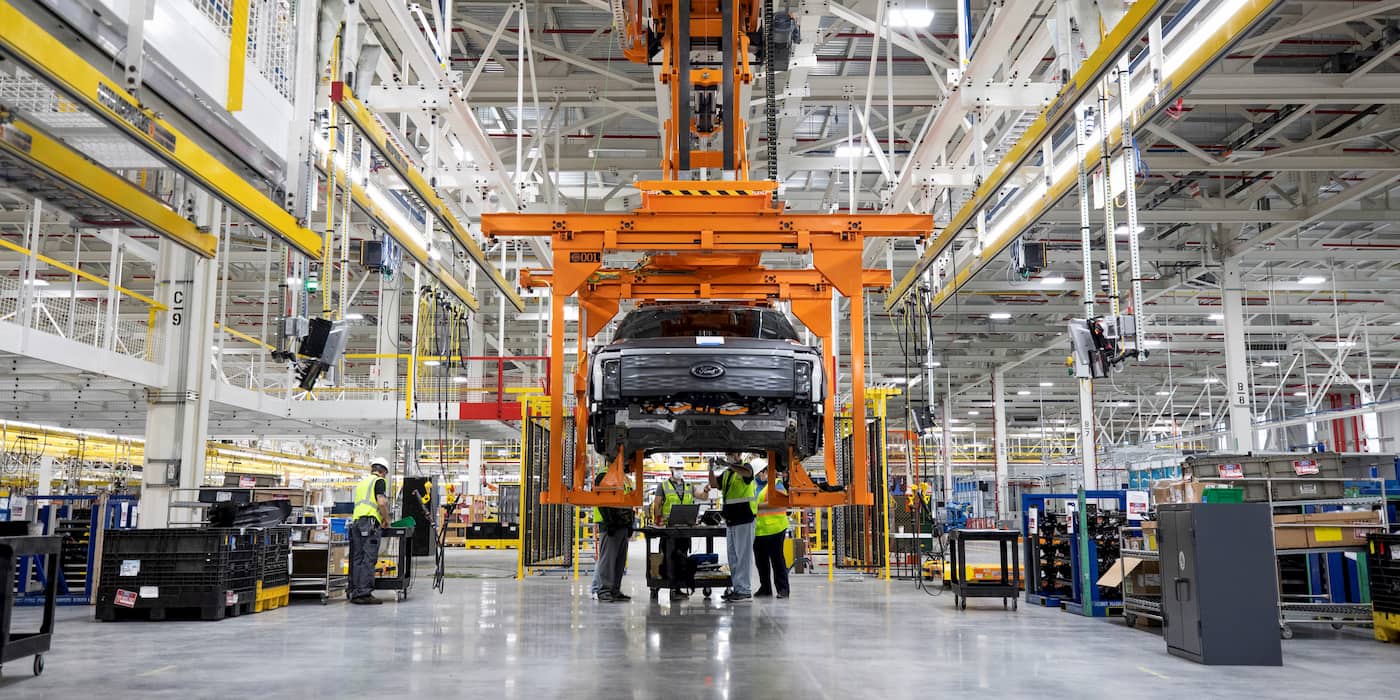 As the race to gain electric vehicle market share heats up, Ford has a new partner to help it overcome EV manufacturing bottlenecks and meet the overwhelming demand for zero-emission models. Ford announced Wednesday it has chosen Rockwell, a leading industrial automation provider, to enable its next three EV assembly lines and accelerate its EV rollout.

Ford remained the #2 EV brand in the United States through the third quarter. However, CEO Jim Farley wants more.

Year-to-date in the United States (through October 2022), Ford has sold:

Farley explained yesterday at a conference in Detroit, “we want to be number 1” as the automaker trails only Tesla in EV sales in the United States. He went on to explain how if Ford wants to remain competitive, it will need to build EV components such as electric motors and batteries in-house in a nod to automakers’ early manufacturing ambitions, such as with the Model A.

Ford says it’s on track to reach its 600,00 EV run rate target by the end of next year as it scales production to two million by 2026.

Meanwhile, the automaker has had several setbacks due to supply chain issues, like much of the industry. Ford addressed the issue on its Q3 earnings call, stating:

Clearly, we need to continue to improve our competitiveness, not just on quality, but on cost and supply chain management.

I can’t overstate the sense of urgency we have to address these critical operating areas. I look forward to updating you on future calls.

It looks like Ford has found a partner in Rockwell Automation (ROK) to help it overcome these bottlenecks while accelerating its EV program.

The new collaboration between Ford and Rockwell will help Ford meet the rising demand for its EVs while assisting in successful on-time launches.

According to the release, Rockwell will work as its “vehicle operations primary controls and solutions provider” for Ford’s next three EV assembly lines to ease bottlenecks. Rockwell says it can help Automakers like Ford “improve quality, reduce costs, increase responsiveness, and improve time-to-market throughout their supply chain.”

We look forward to working closely with Ford and its ecosystem over the next several years to accelerate business outcomes and advance the company’s position as a global leader in the electric vehicle market.

Rockwell’s VP of global industry accounts, Jane Barr, says the company is honored to assist Ford as it accelerates its EV rollout while adding:

Rockwell will work with Ford at its next three EV assembly sites, including Blue Oval City, Tennesee, the automaker’s $5.6 billion EV battery and manufacturing campus.

To be the best, you need to beat the best. Ford looks to overtake Tesla by optimizing its manufacturing capabilities and workflow.

With regard to manufacturing and technology, about 5 or 6 years ago, we said we wanted to become the best manufacturer in the world and that is somewhat counterintuitively, to some people, will actually be, I think, our strongest competitive advantage.

Musk and Tesla’s focus on superior manufacturing and technology has led to some of the strongest gross margins in the industry, which remained at 27.9% in the most recent quarter. In fact, Tesla earns eight times more per car than Toyota.

Ford’s new partnership with Rockwell will help the automaker strengthen its manufacturing capabilities and supply chain, two critical areas as the industry moves toward electric vehicles.