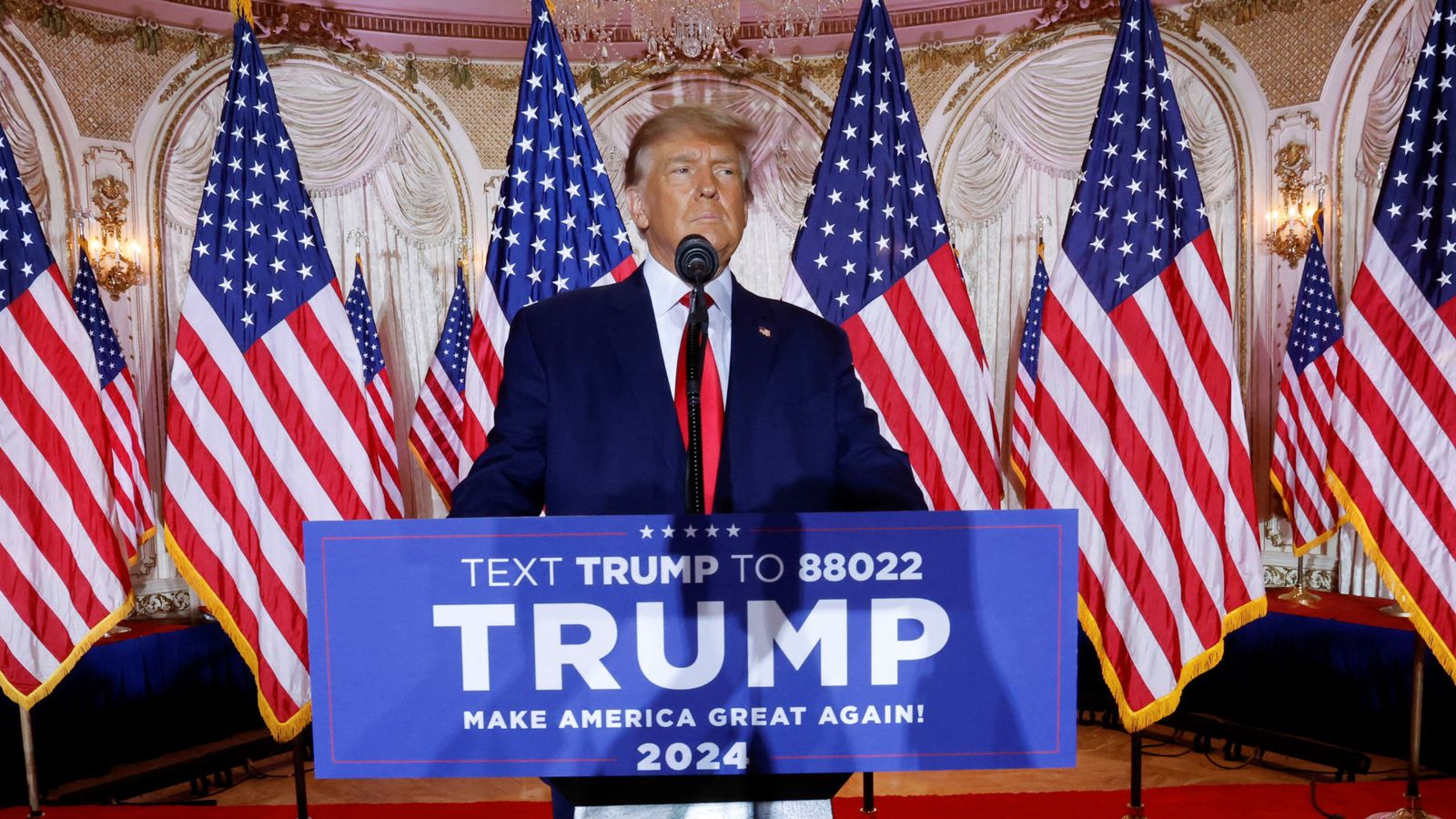 Donald Trump has officially launched a third bid for the US presidency after several hints, amid legal probes and blame for the Republican Party’s underwhelming midterm election results.

He made the announcement from his Mar-a-Lago estate in Florida and said: “America’s comeback starts right now.”

Mr Trump said that “everybody was doing great” after his four years in office, “the world was at peace” and that he “kept his promises”.

“The decline of America is being forced upon us by Biden and the radical left… this is not a decline we must accept.”

He delivered the address to an audience of several hundred supporters, club members and gathered press in a ballroom at his club in Florida – flanked by American flags and banners that read: “Make America Great Again!”.

Ahead of his speech, Mr Trump’s aides filed paperwork for his 2024 presidential bid.

His much-anticipated declaration to stand comes as Republicans are still reeling from voters’ rejection of several of their candidates in the US midterm elections – many of them personally chosen and endorsed by Mr Trump.

He had hoped to use his party’s expected gains as a springboard to his party’s nomination. Instead, he now finds himself being blamed for backing a series of losing candidates after disappointing results in which Democrats retained control of the Senate.

Control of the House remains too early to call.

But the former president, it seems, was eager to return to the spotlight.

He is also hoping to stave off a long list of potential challengers, including Florida Governor Ron DeSantis, who cruised to re-election last week and is now being urged by many in his party to run for president as well.

Mr Trump has described him as “Ron DeSanctimonious”, and dismissed him as being “in desperate shape”.

Read more:
Why US midterms are a very unreliable way of predicting the next president

The midterms last week ended up being as much of a referendum on the defeated former president as they were on incumbent President Joe Biden, with more than a quarter of people (28%) saying their vote had been made “to oppose Donald Trump”, even though he was no longer in office.

He remains a key force in the Republican Party, but is a divisive figure after his controversial four-year term ended with the deadly Capitol riots on 6 January 2021.

He has continued to falsely claim his election defeat – which prompted the riots – was a result of fraud, and is currently facing a string of investigations, including into his tax affairs and whether he took classified documents from the White House after leaving office.

However, last month, a poll found 41% of Americans viewed him favourably.

Another campaign is a remarkable turn for any former president, much less one who made history as the first to be impeached twice.

Just one president in US history has been elected to two non-consecutive terms: Grover Cleveland in 1884 and 1892.

“Hopefully, tomorrow will turn out to be one of the most important days in the history of our country!” Mr Trump had written on his Truth Social media network on Monday.