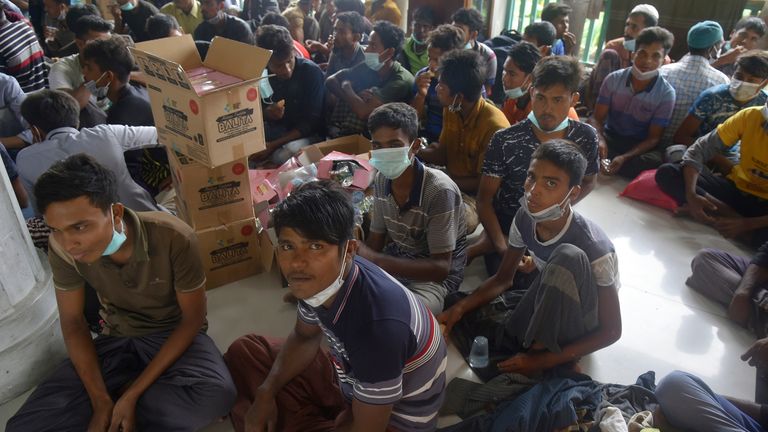 More than 100 Rohingya Muslim refugees have been found on the coast of Indonesia after travelling in a boat for at least a month.

The group, believed to be the latest to make the dangerous journey from Myanmar, were spotted on a beach in Indonesia’s Aceh province by fishermen on Tuesday.

Among the refugees were 65 men, 27 women and 18 children, according to Herman Saputra, the area’s police chief.

Described as weak and hungry, the entire group was moved to a nearby community hall for health checks until authorities decide where to accommodate them.

Muhammad Amin, one of the refugees from Myanmar, said that before they were stranded in Aceh waters, they were aiming for Malaysia as their final destination.

Asked how long the group had been travelling, Mr Amin said: “It’s been one month and three days.”

Hundreds of thousands of Rohingya Muslims have fled from Buddhist-majority Myanmar to refugee camps since August 2017, when the country’s military launched operations in response to attacks by a rebel group.

Myanmar’s security forces have been accused of raping Rohingya people, killing them and burning their homes.

Originally heading for Bangladesh, many groups of Rohingya have attempted to leave the country’s camps by sea in the hope of reaching other Muslim-majority countries in the area.

Malaysia has been a common destination for the boats, even though many Rohingya refugees who land there face detention.

In March, 114 Rohingya refugees were also found on a beach in Indonesia’s Bireuen district in Aceh province.

The country is not a signatory of the UN 1951 Refugee Convention – a treaty that defines who a refugee is, and sets out the rights of individuals who are granted asylum and the responsibilities of nations that grant it.

Instead, a 2016 presidential regulation provides a legal framework governing the treatment of refugees on boats in distress near Indonesia and helps them disembark in the country.