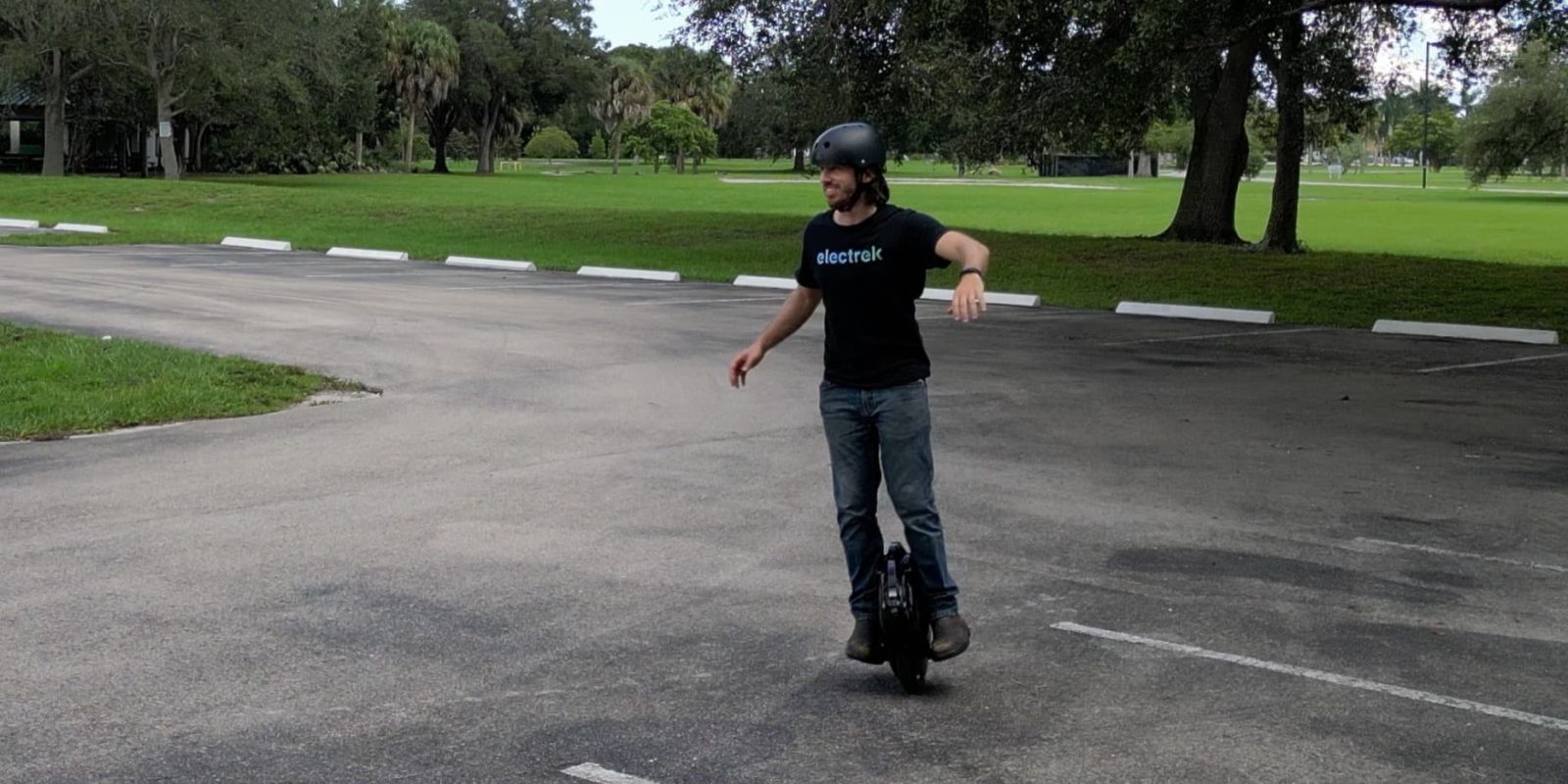 The electric unicycle crowd is a pretty passionate one. It’s not rare to see you folks in my comment section, lecturing me about how your EUC goes farther and faster than whatever e-bike I’m covering that day, all for a fraction of the price. And I’ll admit, the ability to ride an electric vehicle to your destination and then just pick it up to carry it inside like a briefcase does have its appeal. So I figured I’d give the InMotion V5 a test, as it’s supposed to be a very beginner friendly wheel.

I’m actually not a total beginner at electric unicycles, but it’s been a good half a decade or so since the last time I hopped on one.

And even then, I was far from being able to teach a class on the subject, to put it lightly.

So I figured it’s about time to climb back up on the one-wheeled horse. And to do so, InMotion hooked me up with a novice wheel known as the InMotion V5.

It’s about as beginner-friendly as it gets with modest power, a low top speed, and a smaller battery to keep it lightweight.

Check out how my testing went in my video review below. Spoiler alert: I didn’t hurt myself! Oh yeah, then keep reading to see my complete thoughts on this alternative electric vehicle.

Electric unicycles have proven to be just as convenient as I imagined them to be. It’s amazing to have a fully-capable little electric vehicle that fits under my chair. I don’t even have to worry about locking it outside like an e-bike or an e-scooter since I can just bring it inside with me.

But the convenience is only appreciable after you put in the time to become comfortable riding one. Depending on your sense of balance and mental elasticity, that may take just a few short days or several long and painful weeks.

There’s a lot of hopping off and dropping the EUC along the way. In fact, I highly recommend picking up one of those protective unicycle condom things that sleeves right over it and prevents you from scratching up your shiny new wheel.

For me, I was usually able to hop off and grab the handle, preventing mine from getting too scratched.

When it comes to learning, the best thing to do is start out in an open area like a parking lot.

Start with one foot on a platform and position the wheel up against the leg of that foot (I’m right-handed and like to start with my right foot on the wheel first). Then in one motion jump the other foot onto the empty platform and lean your whole body forward.

Congrats, you just had your first attempt and your first fall! Repeat that several dozen times, and you’ll be done.

Basically just keep doing that same thing, but keep these tips in mind. 1) Don’t look down at the wheel, but instead off at a point in the distance. 2) Don’t just lean your shoulders forward, but instead lean your whole body forward. If it helps, think of pushing your chest out and forward. 3) Make sure you’re standing up straight and not turning into a turtle.

Keep doing that until you can basically go straight. Once you feel like you’re rolling decently enough, it’s time to start turning. You turn by looking where you want to go. Look left, go left. Look right, go right.

I’ve read before that some people recommend starting up against a wall or fence so you can hold onto it for balance. But I found that to just get in the way since I was relying on the support instead of letting my brain learn to balance by itself.

The best way to train once you have your basic balancing down pat is to move from a wide open parking lot to somewhere with paths that have defined edges.

Walking paths in a park are best, especially ones with gentle curves instead of straight lines with hard angles at intersections. When your mind sees a boundary on either side, it just starts to move your body and steer you to stay within the boundary.

You quickly learn that steering is almost more involuntary than voluntary. Don’t try and steer left like you’re in a car. Instead, look down the curve to the left and lean slightly towards your target. Your body will handle the rest.

For me, it fortunately only took a few minutes off falling off the wheel to re-learn what I originally learned years ago from my first attempt at an electric unicycle. If this is your first time ever, then expect it to take several sessions over a few days.

It can be demoralizing in the beginning, but don’t quit. You think those dudes who walk tightropes were just born on a clothesline in the delivery room? No, they practiced until they could do it with their eyes closed. And that’s all there is to learning to ride an electric unicycle… practice!

The InMotion V5 makes it fairly easy since it just isn’t overly powerful. It’s not going to rocket out from under you, and it’s not going to freak you out with sudden acceleration. It doesn’t even weigh that much at just 25 pounds.

It even has cute little audio tips, like when you fall over it calls out, “Be careful!” Thanks, like I hadn’t thought of that.

Once I got the hang of it again, I really started to enjoy cruising around on the InMotion V5.

I could wiggle between parking meters, bollards, rows of picnic tables or just about anything else that came along my way. I could slow to nearly a crawl (though I’m still trying to figure out how to just rock back and forth in place, idling). I can roll over debris that might freak me out on smaller 8″ scooter wheels. And I can even take it up and down inclines, though I don’t have very many in Florida to test it on. The manufacturer claims it can handle an 18º slope, but I’ll believe that when I see it.

The 12.5 mph speed limit might seem like a lot at first when you’re struggling to go 3 mph, but you’ll quickly run up against it. It kind of freaks you out the first time you hit it, as the wheel speeds up slightly to gently rock you backwards while reminding you to “Slow down!”

Since the InMotion V5 is very much a beginner wheel, there’s a decent chance you’ll outgrow it and want to move up to a more powerful and faster model. That’s exactly what has happened to me now that I’ve gotten comfortable on it.

Even though you may progress pass its abilities, it’s a great way to get started in this fun world of single-wheeled electric vehicles. And at $599, it’s a pretty cheap way to test the waters, too.

Lucid Motors shares new images of Gravity SUV ahead of ‘early 2023’ reservations
Hyundai’s IONIQ6, the ‘new standard in dynamic EV driving,’ sells out in under 24 hours