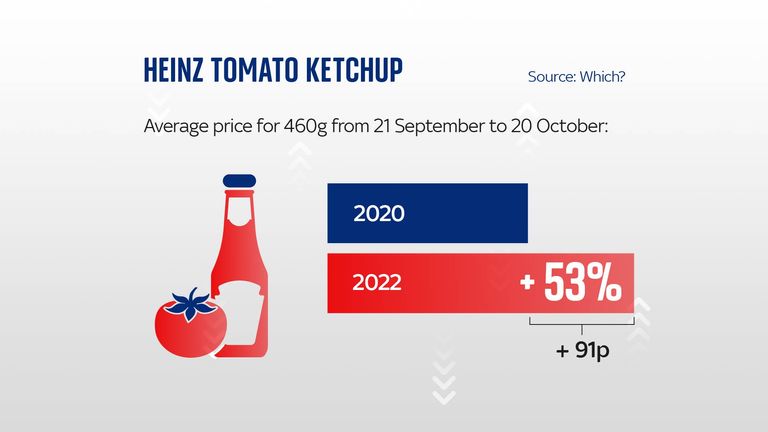 Some of the UK’s most popular branded foods have soared in price over the last two years – with a range of items now costing double, according to new research.

An investigation by Which? looked at 79 branded items, comparing prices at six major supermarkets (Asda, Morrisons, Ocado, Sainsbury’s, Tesco, and Waitrose) over a 30-day period from 21 September to 20 October in both 2020 and 2022.

Aldi and Lidl were not included in the study because they did not have enough comparable items.

The latest on the cost of living

Out of the items on their shopping list, Heinz Tomato Ketchup – the squeezy top down one (460g) – saw the biggest average percentage increase overall, going up by 53% (91p) across the six retailers.

The second biggest average percentage increase on the branded products included in Which?’s list was on Dolmio Lasagne Sauce (470g) which went up by 47% or 61p across the six supermarkets in the two years.

One of the biggest leaps took place with branded butter. Anchor Spreadable butter tub 500g went up by £1.31 (45%) on average across all six supermarkets over the two-year period.

The spread hit the headlines earlier this year after it was found a pack costs more than £7 in some supermarkets.

But branded products are not alone in seeing price rises – the price of low-cost everyday goods increased 17% in the 12 months to September, more than the average rate of food and drink inflation.

The figures, based on web-scraped supermarket data for 30 everyday grocery items, showed the cost of items had already increased 7% in the year up to April.

Overall, grocery inflation sits at 14%, with households facing a £643 hike in their average annual bill.

Sue Davies, Which? Head of Food Policy, said: “Our research shows the shocking rate of inflation on some of the nation’s favourite branded foods, which is much higher than the national average, and highlights why it is so important for retailers to provide people with a choice of product ranges.

“Supermarkets must ensure budget lines for healthy and affordable essential items are widely available across their stores including smaller convenience stores. Promotions should be targeted at those most in need and people supported so they can easily compare the price of products to get the best value.”

Read more on the cost of living:
Kate Winslet covers £17k energy bills for Scot mum
Coping with childhood cancer in a cost of living crisis
Price of a pint up 9% in a year

It comes as data found last month that millions of households were skipping meals or struggling to put healthy food on the table.

Around 85% of people in the UK are spending less on food shopping as a result of the cost of living squeeze, most commonly by looking out for items on promotion, research by consumer group Which? suggests.

Among the 9% who said they are finding it “very difficult” to get by, half said their household was skipping meals, as did a quarter of those who are finding the current situation quite difficult.

See which prices have gone up or down with Sky’s spending calculator. The latest inflation figures are due to be released tomorrow. which could see a further rise in household favourites.

The 30 branded products with the biggest price rises: