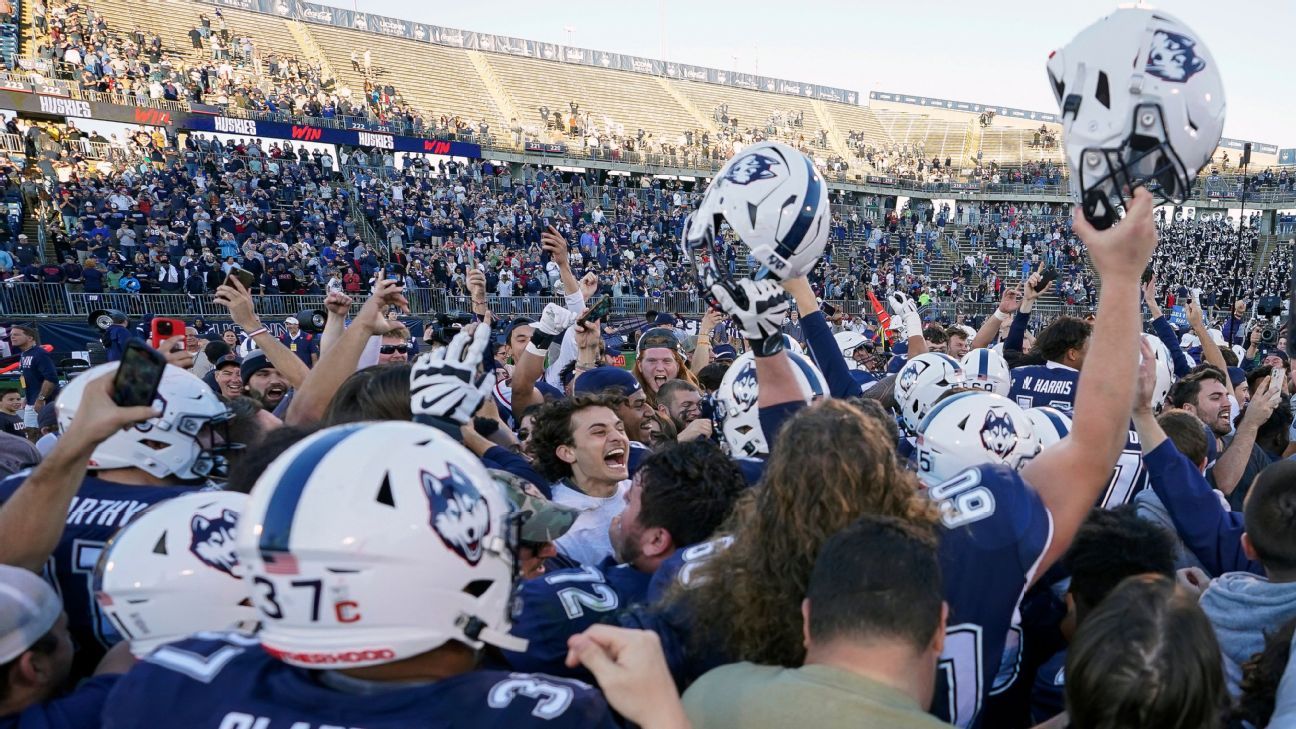 EAST HARTFORD, Conn. — Zion Turner came to UConn with dreams of leading the struggling program back into the mix for a bowl. Little did he know, it would happen fast.

The freshman quarterback connected with Kevens Clercius for a 30-yard touchdown late in the fourth quarter Saturday, leading UConn to a 36-33 win over Liberty (No. 19 AP).

With the win, the Huskies (6-5) gained bowl eligibility for the first time since 2015, and fans celebrated by rushing the field.

“This is everything we wanted to bring this program back to,” Turner said. “Just to have the fans have pride in this program once again, it’s a great feeling.”

“I’m so happy for this program,” Mora said. “They showed a lot of willpower. That was about as complete a team win, team effort as we’ve had all year.”

Turner finished 15-of-21 for 103 yards. Robert Burns led UConn’s rushing attack with 104 yards on 11 carries and a touchdown while Victor Rosa added 10 carries for 62 yards and two scores.

The lead changed hands multiple times in the fourth quarter. Rosa bounced off a number of defenders and scampered 27 yards for a TD that gave the Huskies a 28-27 lead. On the next play, Liberty went back ahead on a 75-yard sweep by Demario Douglas.

“They wanted it today a little more than we did, it appeared, and they played really solid football,” Liberty coach Hugh Freeze said. “It’s frustrating. We didn’t play our best or coach our best and you know we lose together.”

Burns helped UConn start fast by returning the opening kickoff to midfield. UConn reached the end zone eight plays later, with Rosa scoring from 16 yards out. Turner was perfect on the drive, connecting with Aaron Turner four times for 29 yards, including twice on third down.

The Huskies’ defense also did its part, intercepting Bennett once and posting two sacks in the first half, including one by Eric Watts that resulted in a touchdown. Linebacker Jackson Mitchell scooped up a fumble by Kaidon Salter and returned it 32 yards for a 14-3 lead.

“He plays every single down with maximum effort,” Mora said of Mitchell. “Therefore, he’s in the right place.”

After trailing twice by double digits, the Flames seized momentum in the second quarter when linebacker Ahmad Walker picked off Zion Turner. Malik Caper bulldozed his way into the end zone eight plays later, cutting the deficit to 21-17 before halftime. Liberty grabbed its first lead on a Green 1-yard run, capping a seven-play, 80-yard drive to begin the second half.

STEPPING UP WHEN IT MATTERS

Burns turned in the first 100-yard rushing game of his career. Most of the Miami transfer’s contributions had come as a fullback.

“We didn’t know what he was going to be to start this year,” Mora said. “He’s the best fullback in the country. He’s an NFL fullback.”

UConn: The Huskies are now bowl-eligible in their first year under Mora, completing a remarkable turnaround.

Liberty: Losing to the unranked Huskies is a major dent to Liberty’s résumé and will result in a drop in the poll.

UConn: The Huskies wrap up their regular season Saturday at Army.