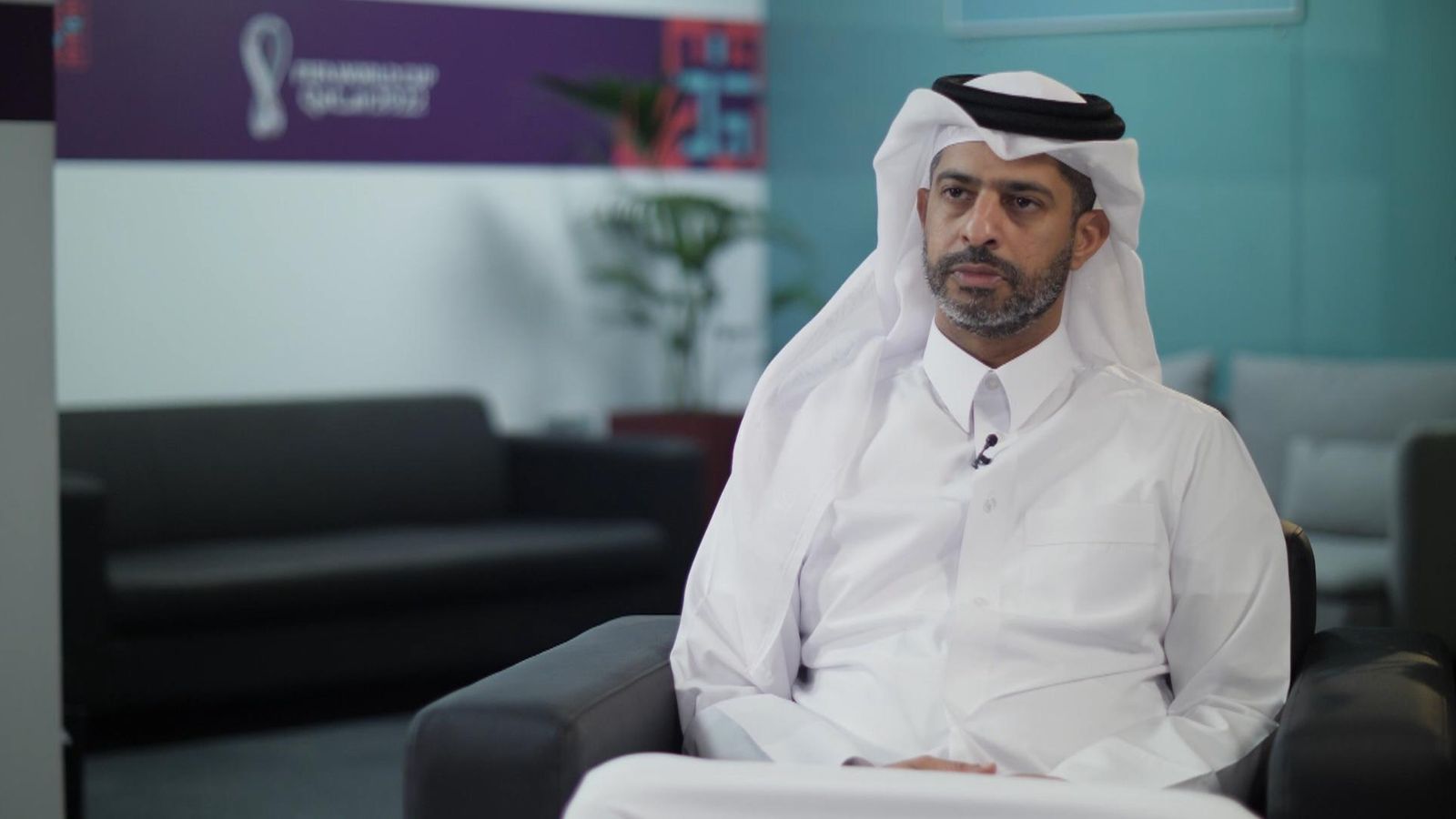 Qatar’s World Cup chief has told the English and Welsh FAs to focus on their teams rather than demanding compensation for migrant workers.

In a wide-ranging interview in Doha, the capital, Nasser Al Khater also told Sky News that enduring criticism of the tournament could be considered racist.

In that time, Mr Al Khater has risen to chief executive of the supreme committee overseeing Qatar’s planning and has been in the firing line of criticism.

A group of European countries, including England and Wales, has spent the World Cup build-up highlighting concerns about the suffering of migrant workers and claimed inadequacies in Qatar’s compensation funding.

“And I feel that they feel obliged, that they need to speak. I think they need to really read and educate themselves a little bit more about what’s happening on the ground in Qatar.”

A UEFA working group on labour rights in Qatar held talks at FIFA HQ in Switzerland on Wednesday.

“So when people come out and say, ‘Yes, we agree that there needs to be some sort of compensation fund’,” Mr Al Khater said, “they’re just reading off a piece of paper.

“So let’s leave that to the experts… and let us focus on football. Let the football administrators focus on their teams. And let’s just leave it at that.”

‘Be respectful of culture’

Although World Cup organisers insist there have only been three work-related deaths at stadiums, concerns linger that more migrant workers died on wider infrastructure work across Qatar as every fatality is not fully investigated.

Mr Al Khater pointed to Qatar improving labour laws and the introduction of a minimum wage.

But Qatar is not prepared to change anti-LGBTQ+ laws to respond to concerns of visiting fans, but has insisted none will be discriminated against during the 29-day tournament and that gay fans can hold hands.

“All we ask is for people to be respectful of the culture,” Mr Al Khater said. “At the end of the day, as long as you don’t do anything that harms other people, if you’re not destroying public property, as long as you’re behaving in a way that’s not harmful, then everybody’s welcome and you have nothing to worry about.”

Although Mr Al Khater has said fans can display rainbow flags, he said “it’s a FIFA matter” whether approval is given for Harry Kane, the England captain, and Gareth Bale, his Welsh counterpart, to wear multicoloured “One Love” armbands that highlight discrimination.

“From what I understand, there are discussions taking place about the different political messages that are going to be,” Mr Al Khater said.

He added: “This is a sporting tournament that people want to come [to] and enjoy. Turning it into a platform of political statements I don’t think is right for the sport.”

Fans will be attending matches in eight new stadiums built around Doha. Accommodation remains available through organisers but 95% of tickets have been sold, Mr Al Khater said.

To host the World Cup, Qatar has had to open up more areas for the sale of alcohol – including outside stadiums and in fan zones – rather than it remaining restricted to hotel bars.

Mass gatherings of boisterous, drunk supporters is unfamiliar territory for the first Muslim nation to host a World Cup.

Mr Al Khater said: “There are plans in place for people to sober up if they’ve been drinking excessively.

“It’s a place to make sure that they keep themselves safe, they’re not harmful to anybody else.”

Mr Al Khater sidestepped ongoing concerns about whether vote-buying secured the World Cup hosting rights in the vote in 2010, saying he feels Qatar has been unfairly targeted generally.

“We’ve taken the challenge upon ourselves and we’ve risen to that challenge,” he said.

“But you know, who knows, possibly.”