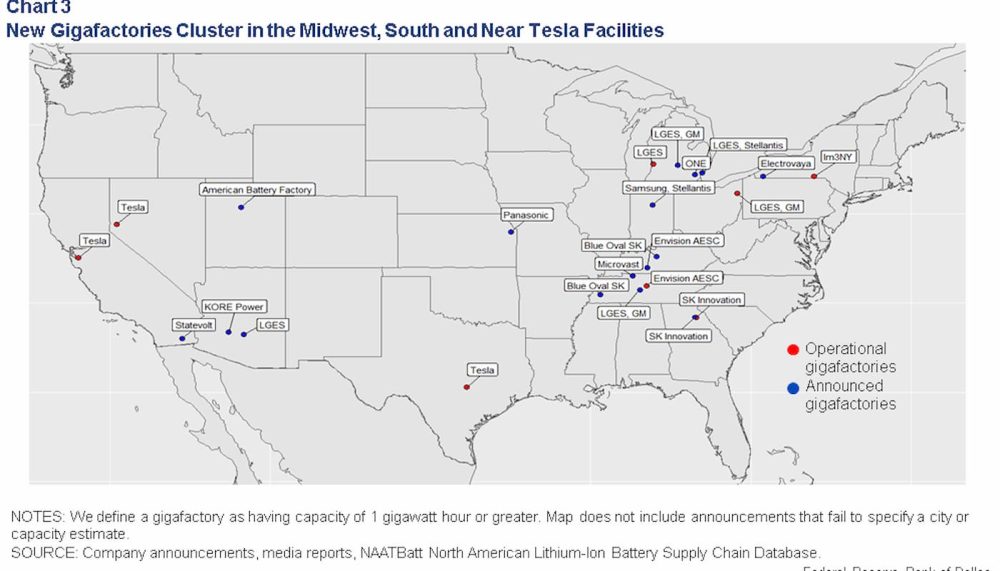 A new ” battery belt” is emerging in the United States as automakers from around the globe race to meet the overwhelming demand for fully electric, zero-emission vehicles. With limited production ability, planned investments to ensure the US has an adequate supply of critical EV battery components exceeds $40 billion.

Automakers and government leaders alike have set ambitious goals for the future of electric vehicles as they look to a cleaner, more sustainable future. President Biden set a goal for 50% of overall vehicle sales to be electric by 2030.

Since then, the administration has passed a few landmark investments to support the transition and ease a few bottlenecks holding the US back from higher EV production capabilities.

The Bipartisan Infrastructure Law, signed into law in November 2021, includes $89.9 billion in funding to modernize public transit and another $7.5 billion in investments to build an EV charging network across the US.

One of the biggest problems automakers faced initially was access to semiconductors. The CHIPS and Science Act was passed to address this, providing $52.7 billion in investments to establish a reliable domestic supply chain.

And then the recently passed Inflation Reduction Act, signed into law on August 16, invests $369 billion to build a clean, sustainable economy, including tax credits for EV buyers.

Meanwhile, US automakers like General Motors have laid out plans to provide an “EV for everyone” while looking to mirror the success of Tesla, who delivered a record 343,000 EVs in the third quarter.

With nearly every automaker targeting an all-electric future, it will require a good deal of batteries. The new climate bills are stimulating investments in US EV battery production, up 700% since the start of 2021.

A new research report from the Federal Reserve Bank of Dallas highlights the significant investments automakers are pouring into the US to scale EV battery production and meet the surplus of people looking to make the switch.

EV battery investments in the US exceed $40 billion

According to the report, US EV battery capacity additions in the US were minuscule compared to the past few years. The federal institution points out:

U.S. capacity additions were sporadic until recently when the pace of new announcements picked up. Six new facilities, worth more than $5 billion, were announced from 2018 to 2020.

As mentioned, new US climate initiatives have promoted a significant ramp in EV battery investments.

Since the start of 2021, more than 15 new facilities or expansions have been disclosed in the U.S., reflecting a potential investment of at least $40 billion.

And this is just the start. The production capabilities at these facilities far exceed their earlier counterparts. All but one of the 15 new plants exceed 10 GWh capacity compared to earlier announced facilities, often producing less than 1 GWh.

With the new EV tax credit requirements (battery sourcing and final assembly must take place in North America or with free trade partners), automakers are scrambling to ensure their EV models meet the criteria.

With over $40 billion in investments already, EVs are reviving the rust belt in what’s being called the new “battery belt.” The new funding is creating jobs while putting the US on a path toward sustainability. So far, these historical investments have created over 642,000 manufacturing jobs in the US since 2021.

Meet the world’s first hydrogen fuel cell-powered container handler
Polestar 3 officially debuts with 300-mile range for a whopping $84k, will be manufactured in the US