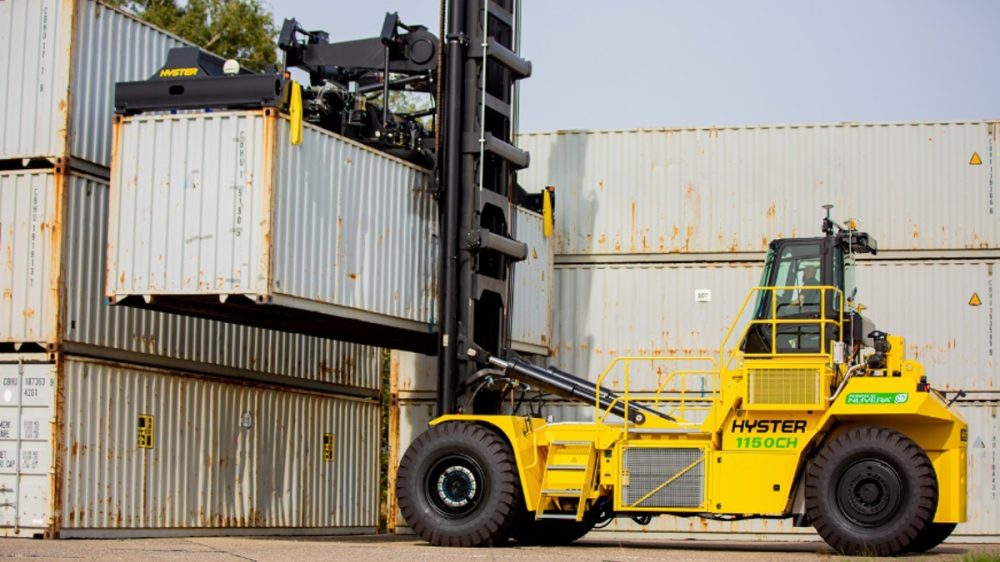 The HFC top-pick container handler pilot program is taking place at Fenix Marine Services in the Port of Los Angeles.

A container handler is a special forklift that can efficiently stack emptied shipping containers and lift and handle heavy-loaded containers.

A California Climate Investments grant awarded by the California Air Resources Board in 2018 helped support the development of this HFC-powered container handler.

The “HFC-powered top pick,” as Hyster calls it, provides the zero emissions benefits of a battery electric option, with enough capacity to keep operators moving and avoid the need to stop in the middle of a shift to refuel or recharge.

The hydrogen fuel cell works in tandem with an onboard lithium-ion battery to either power the equipment directly or charge the onboard battery.

Our mission is to provide the innovative technologies our customers need to help meet their goals for emissions reduction and performance. For some operations, lithium-ion power might be the answer, but for others, hydrogen is the right choice.

The answer depends on so many factors like duty cycle, utility grid capacity, and fuel availability.

Hyster expects that refueling the container handler with hydrogen will take around 15 minutes, and that will provide 8 to 10 hours of continuous run time. The HFC-powered top pick will only produce water and heat.

It also features a patented Hyster energy recovery system for electric container handlers that recovers and stores energy from lowering loads and braking.

We at Electrek, of course, advocate for electric vehicles, but ultimately we’re interested in reducing emissions to fight climate change, and that’s why we believe hydrogen fuel cell-powered vehicles have their place when it comes to heavy vehicles like this one. This vehicle has a load capacity of over 90,000 pounds.

To state the obvious, there’s a lot of global shipping, and thus a lot of containers. (Where do you think all those Amazon orders you place come from?)

And that means a lot of container handlers.

So to make all of the container handlers run on clean energy would be a very good thing indeed.