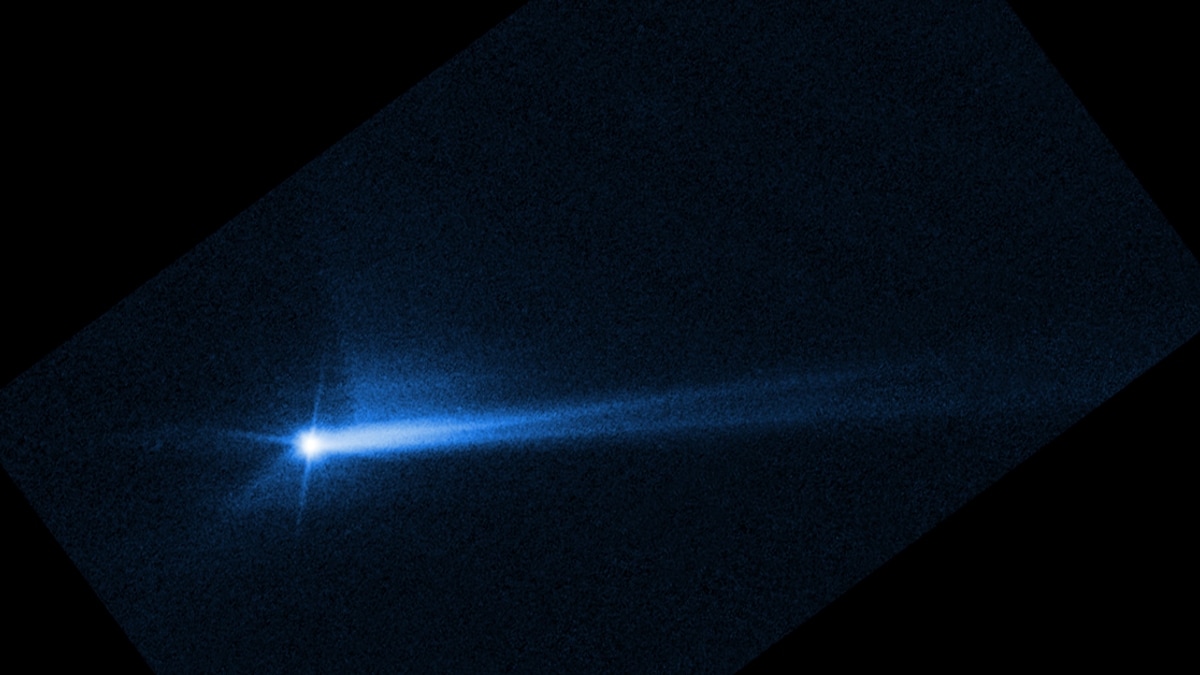 NASA on Tuesday celebrated exceeding expectations during a mission to deflect a distant asteroid, in a sci-fi like test of humanity’s ability to stop an incoming cosmic object from devastating life on Earth.

That changed its orbital period by four percent, or 32 minutes — from 11 hour 55 minutes to 11 hours 23 minutes, bettering an expectation of 10 minutes.

“At some point in the future, if we find an asteroid that is threatening to hit Earth, and would be large enough to really do some damage, thank goodness that we will have had this successful test,” Nelson told AFP.

The asteroid pair loop together around our Sun every 2.1 years, and pose no threat to our planet.

But they are ideal for studying the “kinetic impact” method of planetary defense.

DART’s success as a proof-of-concept has made a reality what was once science fiction — notably films such as “Armageddon,” “Deep Impact,” and “Don’t Look Up.”

Never actually photographed before, Dimorphos, which is 530 feet (160 meters) in diameter or roughly the size of a big Egyptian pyramid, appeared as a speck of light around an hour before impact.

Its egg-like shape and craggy, boulder-dotted surface finally came into clear view in the last few moments, as DART raced toward it at roughly 14,500 miles (23,500 kilometres) per hour.

In the days that followed, astronomers rejoiced in stunning images of matter spreading out thousands of miles — pictures collected by Earth and space telescopes, as well as a tiny companion satellite that traveled to the zone with DART.

Thanks to its temporary new tail, Dimorphos has turned into a man-made comet.

But quantifying just how well the test worked required an analysis of light patterns from ground telescopes, which took a few weeks to become apparent.

The binary asteroid system, which was around 6.8 million miles (11 million kilometres) from Earth at impact, is visible only as a single dot from the ground.

The dot’s brightness changes as Dimorphos passes in front of Didymos, which is significantly bigger at half-a-mile wide.

The test also showed scientists that the asteroid is less like a solid rock, and more like a “rubbish pile” of boulders bound by mutual gravity.

If an asteroid is more solid, the momentum imparted by a spaceship will be limited. But if significant mass is pushed at high velocity in the opposite direction to impact, there will be an additional boost.

“It looks like the recoil from the ejecta blast off the surface was a substantial contributor to the overall push given to the asteroid,” said NASA scientist Tom Statler at a briefing.

The test will serve as an “anchor point” for simulations and calculations about the outcome of future impacts, he added.

No known asteroid larger than 140 meters (460 feet) in size — big enough to devastate a city — has a significant chance to hit Earth for the next 100 years, according to NASA.

But wait long enough, and it will happen.

The geological record shows, for example, that a six-mile wide asteroid struck Earth 66 million years ago, plunging the world into a long winter that led to the mass extinction of the dinosaurs along with 75 percent of all species.

The agency plans to launch in 2026 a telescope called the Near-Earth Object (NEO) Surveyor to better characterize potentially hazardous 140-meter asteroids and comets that come within 30 million miles.

So far, less than half of the estimated 25,000 NEOs of 140 meters have been discovered.

Kinetic impact with a spaceship is just one way to defend the planet, albeit the only method possible with current technology.

Should an approaching object be detected early, a spaceship could be sent to fly alongside it for long enough to divert its path via using the ship’s gravitational pull, creating a so-called gravity tractor.

Another option would be launching nuclear explosives to redirect or destroy an asteroid.

NASA believes the best way to deploy such weapons would be at a distance, to impart force without blowing the asteroid to smithereens, which could further imperil Earth.