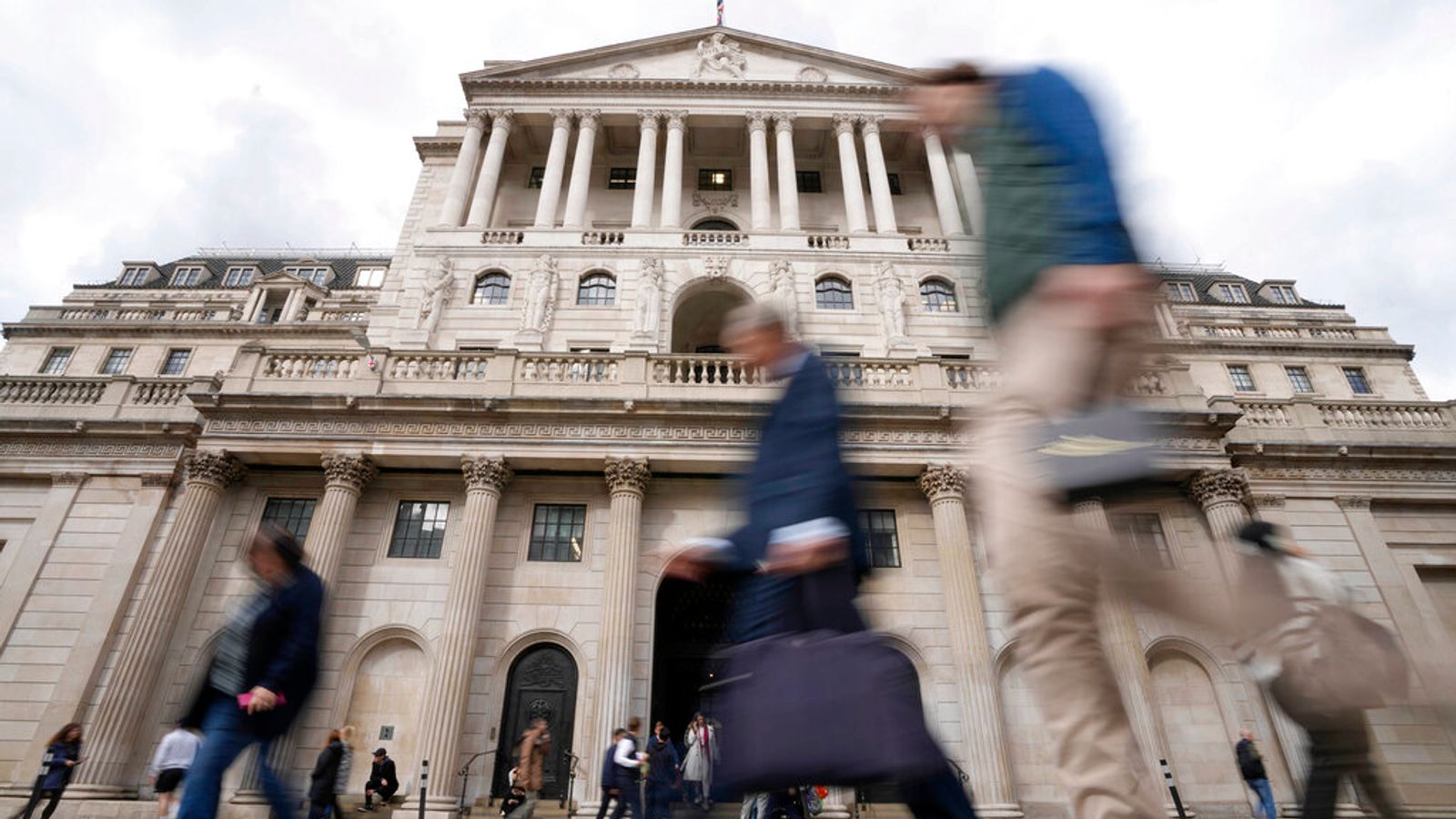 UK government borrowing costs have hit a 20-year high after the Bank of England confirmed its emergency bond-buying programme will end on Friday as planned.

On Wednesday morning, it said all temporary and targeted purchases of UK government bonds, known as gilts, would stop.

This has been the position throughout and has been “made absolutely clear in contact with the banks at senior levels”, the Bank said in a statement.

However, the clarification of its position did little to soothe investor nerves, with a sell-off taking 20 and 30-year gilt yields – the rate demanded to hold government debt – to their highest level since 2002.

Both exceeded 5.1% earlier on Wednesday.

The emergency 13-day bond buying programme was started to avoid “dysfunction” in the pension market.

It is aimed at tackling the consequences of rising interest rates on government bonds, which increased the cost of holding the bonds and resulted in pension funds facing a liquidity crunch.

There had earlier been suggestions that the Bank could backtrack, however, and extend the bond-buying beyond Friday’s cut-off.

The Financial Times said the Bank had been privately telling those working in pension funds that it could be extended.

This came despite the governor, Andrew Bailey, firmly stating pension funds had “three days left… to get this done” at an event in Washington on Tuesday evening.

In its statement on Wednesday, the Bank reaffirmed it would continue to support the pension markets in other ways beyond Friday.

This would be done via the Bank’s temporary yet open-ended measure to help lenders facing liquidity issues who work with the corner of the pensions market that had experienced difficulties. The measure was announced on Monday.

The Financial Times report said those involved in derivatives needed more time to avoid the forced selling that led to the Bank’s intervention on 28 September.

Read more:
What on earth is happening in UK markets?
What are bonds and where do they fit in the mini-budget crisis?

It was revealed later in the day that the Bank accepted £1.9bn worth of offers in its daily index-linked bond buy-back operation.

It also accepted all £2.3754bn of long-dated conventional gilts which it was offered – the highest sum since the scheme began on 28 September but well below the £5bn it would have been prepared to buy.

The pound clawed back some of the losses versus the dollar incurred on Tuesday after Mr Bailey’s refusal to extend the bond-buying support beyond Friday, trading just shy of $1.11.

30-year bond yields were hovering just below their level before the Bank’s first intervention – at 4.9% – after striking the 20-year high earlier in the day.

The thinking behind the emergency bond-buying has been questioned by the Treasury Committee of MPs.

The chair of the Treasury Committee, Mel Stride, wrote to the deputy governor at the Bank on Wednesday and asked for an update on the emergency interventions, querying what further action will be required by the Bank to prevent risks to financial stability.

Mr Stride also asked how the Bank decided to expand its emergency intervention on Monday, to launch new liquidity support to lenders and start buying index linked gilts (with interest rates in line with inflation). He questioned why these interventions were not part of the original intervention announced on 28 September.

What is the Bank of England’s bond-buying programme?

The Bank signalled it is ready to increase interest rates again in November as it fights to bring inflation down to 2%. Most recent figures show inflation was at 9.9%.

“At present, I am still inclined to believe that a significant monetary policy response will be required to the significant macro and market news of the past few weeks.”

“Rises in the cost of living and interest rates will increase pressure on UK household finances and make households more vulnerable to shocks,” the Bank’s Financial Policy Summary and Record said.

Further warnings on the economic health of businesses were issued: “For businesses, higher costs, lower household demand and rising interest rates will reduce earnings. Some may find it harder to repay debts.”

Households may be less impacted by rising interest rates due to being on fixed-term repayment plans and having less debt, the Bank said. Accordingly there is a reduced risk of defaulting on repayments.

“People have less debt (relative to their incomes) and the share of high loan-to-value mortgages is much lower than before the global financial crisis. This reduces the risk of them defaulting on debt and banks are now required to be flexible in their response,” the report said.

The banks are in a better position than the financial crash too and are able to help households should they fall into financial difficulty, the Bank concluded.

“The UK banking sector is substantially more resilient than before the global financial crisis, with significantly higher levels of capital and liquidity. They can continue to support households and businesses even if economic conditions get worse.”

Top City lawyer Nikpay in frame to run competition regulator
Is my pension at risk? Your guide to the market mayhem facing funds