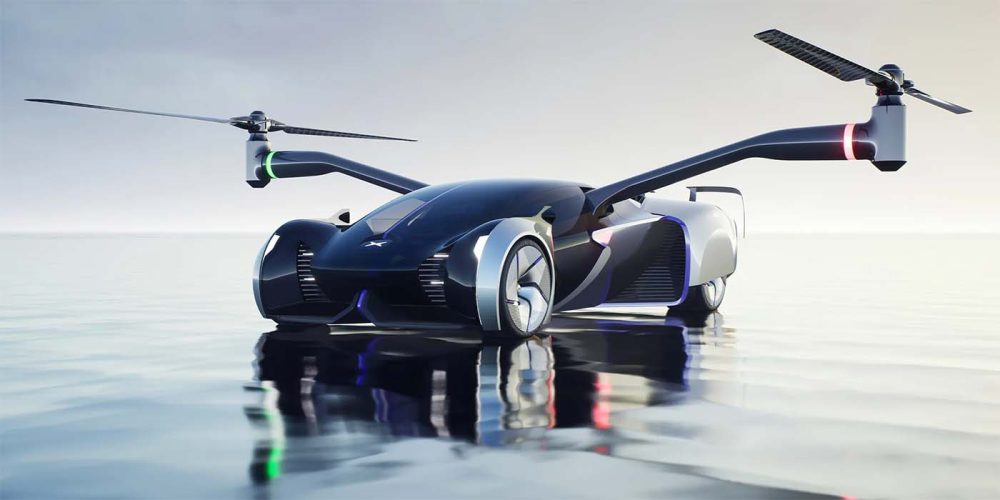 XPeng’s urban air mobility (UAM) company AeroHT has demonstrated huge progress for eVTOL (electric vertical takeoff and landing) vehicles by showcasing its fifth-generation X2 ‘flying car’ publicly taking off, flying, and successfully landing during a demonstration in Dubai. Additionally, the company offered a progress update for its sixth-generation flying car, which is an actual car with wheels that drives and can take off and fly. Check it out.

AeroHT, fka XPeng Huitian, is a majority-owned entity of XPeng Inc. and its founder He Xiaopeng. Since its inception in 2013, AeroHT has conducted over 15,000 safely manned flights with the goal of combining automotive and aerospace technologies to develop safe, domestic electric flying vehicles at scale. These days, it’s well on its way.

Previous eVTOL prototypes include the T1 in 2019, followed by the X1 in 2020. The X2 is the company’s fifth-generation “flying car.” Despite its lack of wheels, AeroHT refers to the X2 as a flying car because it shares much of the same design DNA as the P7 sedan from XPeng Motors.

For the first time, we get to see uncut footage of the eVTOL taking off, flying, and landing. That video is below, but to kick things off, check out this edited footage of the X2 flying car on display at Skydive Dubai outside of Gitex Global 2022:

Following the live demonstration in Dubai, XPeng AeroHT shared details of the event, the company’s progress, and its future in a detailed press release. This initial public flight was attended by over 150 people and was supported by the Dubai International Chamber of Commerce, which was deeply involved in the entire process, providing consulting to XPeng AeroHT.

The X2 flying car is on display this week at Gitex Global – one of the world’s largest tech shows taking place at the Dubai World Trade Center. When moved off-site to Skydive Dubai, the XPeng X2 successfully completed specific operations risk assessments outlined with the DCAA, receiving permission to make its first public flight in Dubai – its first outside of China. XPeng’s vice chairman and president Brian Gu spoke to the achievement overseas:

XPeng X2’s public display in Dubai represents a significant milestone for XPeng AeroHT and the international achievement of flying cars. Dubai is a world-renowned ‘City of Innovation’, which is the reason we decided to hold the X2 first public flight event here. Today’s flight is a major step in XPeng’s exploration of future mobility.

Part of the “exploration of future mobility” Gu is speaking to is XPeng’s sixth-generation eVTOL – a true ‘flying car’ in a more traditional sense given that it can actually drive too. It was first unveiled during the company’s 1024 Tech Day last fall.

At the time, we learned that this latest flying car would be the first to come equipped with road capabilities, offering a lightweight design and foldable rotor mechanism for quick transitions between driving and flying. Additionally, XPeng stated the vehicle will arrive sometime in 2024 and should cost below RMB 1,000,000 (or approximately $156,600).

From Dubai, XPeng AeroHT is teasing new details of this flying car, stating it will reveal “the crucial achievement of R&D progress” as it pertains to the configuration, exterior design, and air driving method. Per XPeng AeroHT:

Equipped with both manual and automatic flight driving modes, this next-generation electric flying car, which is able to drive in the air and on roads, represents a true transformation from two-dimensional to three-dimensional mobility. As well as meeting daily travel demands, it can trigger the folding deformation system to achieve vertical take-off and landing for a low-altitude manned flight.

Those details will be made public during this year’s 1024 Tech day on October 24. More to come later this month. For now, we will have to settle for uncut footage of XPeng’s fifth-generation flying car (without wheels) operating in Dubai. Enjoy.