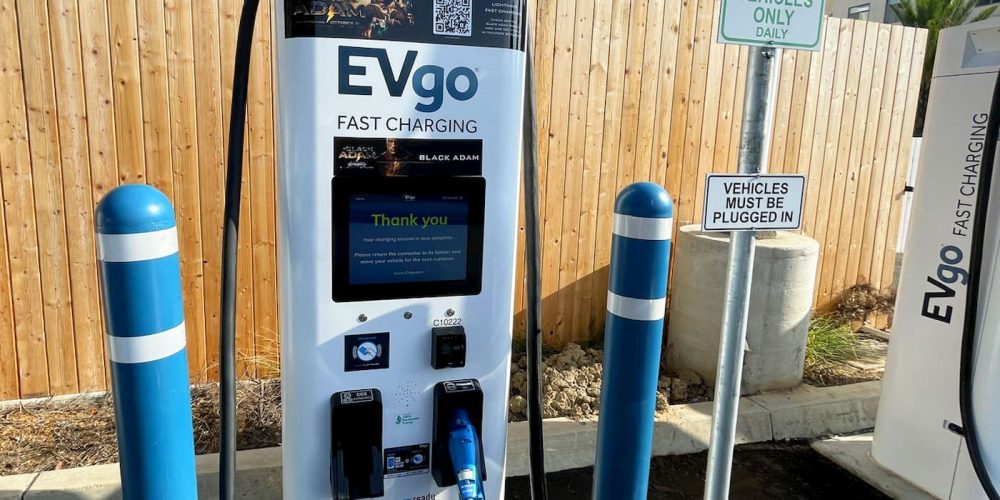 Good news for EV drivers: If you complete a qualifying charging session at an EVgo station, you will be eligible for a $5 Fandango promotion code to see the new “Black Adam” movie in theaters, featuring The Rock.

EVgo has teamed up with Warner Bros. Pictures ahead of the long-awaited release of its latest superhero movie, “Black Adam,” coming to theaters near you starting October 21.

It’s only fitting for a superhero (the man, the myth, the legend himself – The Rock) with the ability to control lightning to be associated with electric vehicles. EVs have been featured in several new movies with superior technology and capabilities.

If you watched the hit thriller “The Gray Man” on Netflix, you might have noticed the fully electric Audi RS e-tron GT the main actor drives. The film’s producers specifically chose the Audi EV models as they represent a “new frontier” for drivers and the auto industry.

Although “Black Adam” doesn’t feature any electric cars that we know of, the filmmakers are partnering with leading charging company EVgo to drive awareness from the growing number of EVs on the road while attracting more viewers.

Since 2010, EVgo has expanded into one of the largest charging networks in the US, with a network throughput of 10.1 GWh. The new promotion with Warner Bros. allows EVgo users to take advantage of the network’s growth with $5 off to see the new “Black Adam” movie.

If you drive an electric vehicle and plan to see the new “Black Adam” movie, you’re in luck. EVgo customers will be eligible for the promotion after a qualifying charging session.

Qualifying charging sessions include EVgo DC fast and L2 chargers. To take advantage of the deal, EV drivers must first confirm their EVgo email address (you can do that here) and then charge for at least 20 minutes on a fast charger or 6 hours at an L2 station.

Once complete, you will receive an email with the promotion code and instructions on how to redeem it. Chief commercial officer Jonathon Levy at EVgo commented on the partnership, stating:

As BLACK ADAM hits theaters, the power of electricity is more apparent than ever, including the shockingly fast charging speeds powered by 100% renewable energy on EVgo’s nationwide network. We’re thrilled to collaborate with Warner Bros. Pictures on this epic action adventure to offer EVgo customers exclusive perks that support experiences we all enjoy, like a night out at the movies.

EVgo has over 850 DC fast charger locations and more than 1,000 L2 chargers across the nation. (Roaming chargers are not eligible.) The promotion starts October 11 and ends November 20, 2022. EVgo users must be in good standing to receive the promotion.

Lastly, drivers near EVgo’s Lot 27 in Santa Monica, CA (1334 5th St.) will have the chance to interact with “Black Adam” characters.

As charging stations continue expanding across the US, I expect to see more partnerships like this. EVgo and Warner Bros. are taking advantage of the growing demand for electric vehicles across the US to spread awareness for the new movie and expand EVgo’s position.