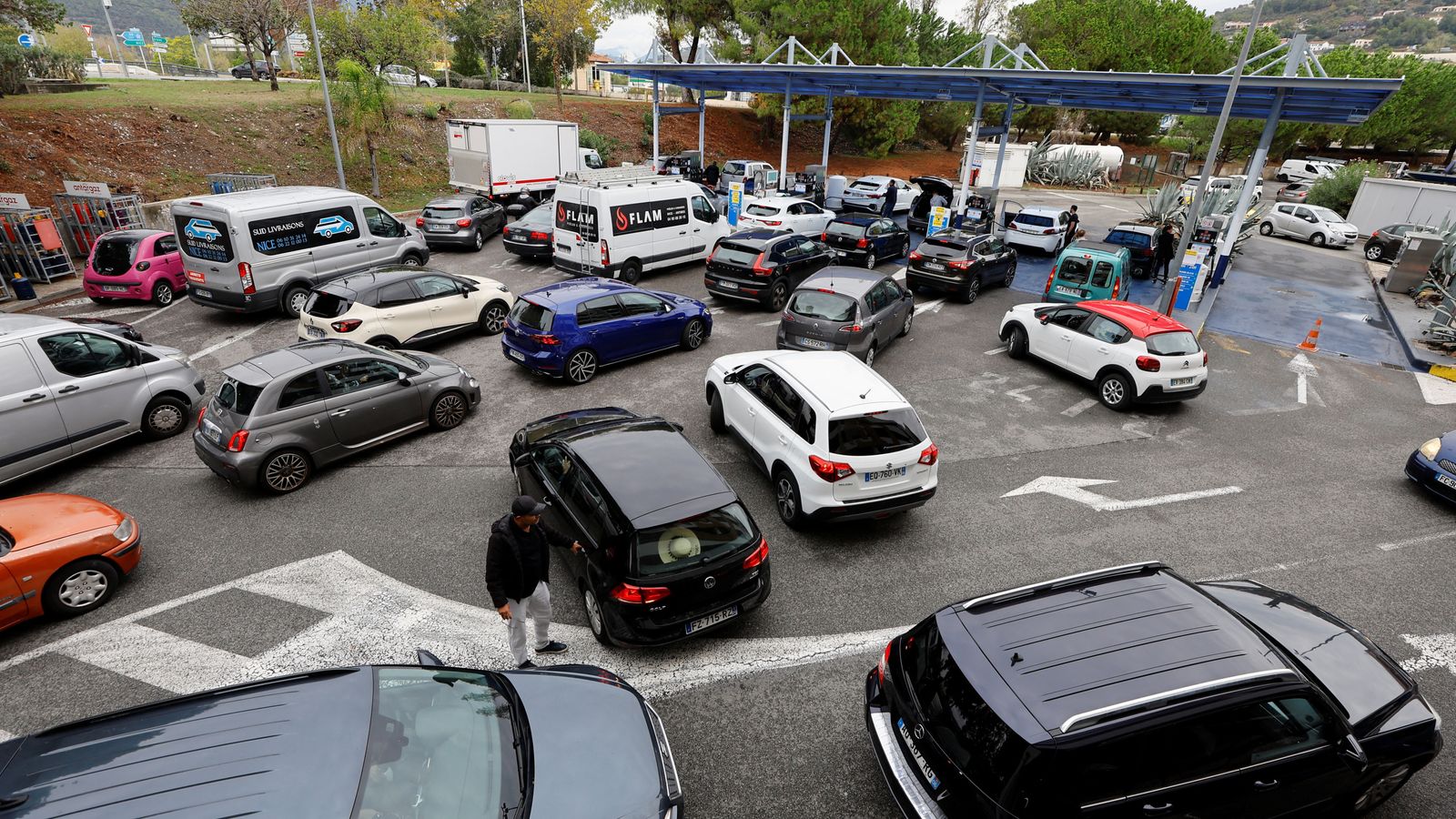 A third of petrol stations were out of one or more types of fuel in France on Monday as fuel strikes continued for a 13th day, according to the country’s energy ministry.

Shortages at the country’s petrol pumps have been impacted by strikes taking place at TotalEnergies and Esso-ExxonMobil refineries and fuel depots.

The industrial action has disrupted refining and delivery and comes as workers across Europe demand higher salaries to cope with surging inflation and a cost-of-living crisis.

French President Emmanuel Macron, whose government is under mounting pressure to act as the strike grinds on and more fuel stations run out of some products, called for a quick end to the crisis.

During a visit to the Mayenne in western France, Mr Macron said: “Negotiations are under way and on track…I hope that in the coming hours, the soonest, this can be resolved. Blocking is not a way to negotiate.”

Long queues formed at fuel stations in the Paris region as drivers tried to fill up before more pumps run dry.

Over roughly two weeks of industrial action, France’s domestic fuel output has fallen by more than 60%, straining nerves across the country, as waiting lines grow and supplies have run dry.

A day after TotalEnergies offered to bring forward pay talks on condition that the union ends its two-week refineries strike, France’s CGT trade union said that “this attempt is perceived as blackmail by the CGT and does not guarantee satisfaction of the demands expressed and therefore the return to work”.

A CGT union representative later said the strike at the refineries would be extended until Tuesday. The union is demanding wage increases of 10%.

More than 60% of France’s refining capacity has been taken offline by the strikes, driving diesel prices higher and prompting the country to increase imports of the fuel.

On Monday, France released strategic fuel reserves for sugar producers after they warned that a lack of diesel impacting the harvesting of sugar beet could lead to factory stoppages, producer group SNFS said.

France’s largest sugar maker Tereos said last month it had to slow output at some factories after TotalEnergies said it would be unable to supply diesel. It declined to comment on the strategic stock release.

Sugar factories, which usually run from September to late January or early February in France, rely on farmers having enough fuel to harvest sugar beet and transport it to a factory to be processed.