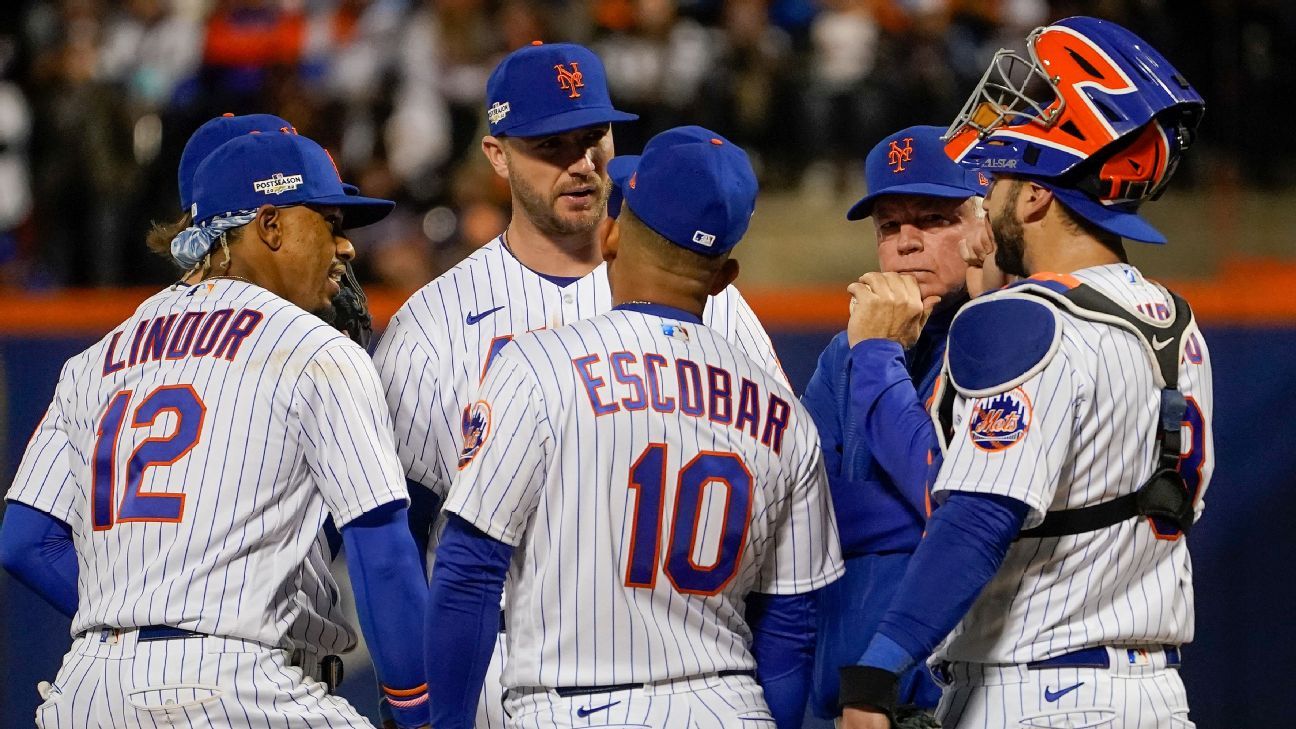 The New York Mets enjoyed 175 days in first place, boosted by their billionaire new owner, confident Jacob deGrom and Max Scherzer would lead them to glory, certain Buck Showalter would make all the right moves.

All that blood, toil, tears and sweat ended not with bubbly and rings but in a one-hit shutout defeat before a stunned crowd short of a sellout and Showalter prodding umpires to search the other team’s starter for secret sticky substances.

“To be honest, it hurts. It really hurts,” Pete Alonso said after Sunday night’s 6-0 loss to San Diego ended the Mets’ postseason return just three games after it began.

“It’s not just the losing. It’s kind of the disbanding of the group because every single guy in this clubhouse is really awesome. And it just sucks that it’s not going to be the same group next year because you have free agency, trade possibilities,” he said.

A day before the loss in the wild-card round, pitcher Chris Bassitt thought about Gotham’s glare.

“There isn’t a harder city in our country to play a sport,” he said. “New York is an absolute just gauntlet every night.”

And now the Mets are on the firing line, entering a winter of constant questions of fight, fortitude and free agency — the group that can go free includes deGrom, Edwin Díaz, Brandon Nimmo, Seth Lugo, Adam Ottavino and Trevor May, and perhaps Bassitt and Taijuan Walker.

In his second season since buying the long-underfunded team, owner Steve Cohen joined with new general manager Billy Eppler to boost payroll to $274 million, the Mets’ first time as baseball’s biggest spender since 1989. They hired Showalter as manager to change a clubhouse culture long tolerant of immaturity and unaccountability.

Players responded by opening a 10½-game NL East lead by June 1, sparking dreams of a championship to join the 1969 Miracle Mets of Tom Seaver and Jerry Koosman, and the 1986 swaggerers led by Dwight Gooden, Darryl Strawberry, Keith Hernandez and Gary Carter.

In a giddy visitors clubhouse in Milwaukee on Sept. 19, after Scherzer pitched six perfect innings to clinch a postseason berth, Cohen called ensuring the first playoff trip since 2016 “just the first step.”

“This is a lot of fun, right? I mean, it’s a lot better than losing,” Cohen said then. “I have high expectations. … I think this is a team that can go really far.”

But after getting swept in Atlanta, they lost the NL East to the Braves on a tiebreaker, consigning the 101-win Mets to a new playoff round. Cohen was nowhere to be seen in the clubhouse after the season-ending defeat.

Scherzer allowed four home runs to the Padres as the Mets lost Friday’s postseason opener 7-1, and deGrom’s 7-3 victory Saturday wasn’t enough to spark a recovery. They were shut out for just the fourth time since the All-Star break and hit .185 with six extra-base hits in the series, going 0-for-10 with two outs and runners in scoring position.

“It’s the worst day of the year,” Scherzer said. “This league is unforgiving. It finds a way to punch you in the face every single time, and you got to find a way to respond to it, come back out and want more. That’s the life of being a major leaguer. I wish everything would be gravy. I wish everything would work out in our favor, but more often than not, it doesn’t, and it’s how you respond from that environment and how to rebound from that.”

Showalter, 66 and running his fifth team in his 21st season as a major league manager, has never reached the World Series. He would etch his name alongside Gil Hodges and Davey Johnson in Mets lore if he pushes this team to the top.

“Billy and I were talking and Steve — we’re trying to do things that fans can trust. Don’t talk about it. Do it. There’s been enough lip service. Not here necessarily, just in general,” Showalter said. “Fans don’t want — you know, show me. Play better.”

In winning a pair of Cy Young Awards, deGrom became a fan favorite, now a holdover from the down days linking to better times. At 34 and coming off 1½ seasons of injuries, he is expected to opt out of his contract, give up a $30.5 million salary for next year and become a free agent. He brushed aside all questions about whether he thinks he’ll be back next season.

“I’m not going to discuss any of that. I have no clue,” he said.

In the minutes after the loss, Showalter had tried to ease their pain while sparking introspection.

“I think I told our players, I don’t want them going around apologizing for winning 101, 102 games,” he said. “But all that does is give you a chance to do what we were able to do the last three games. That’s about all you get back for it.”