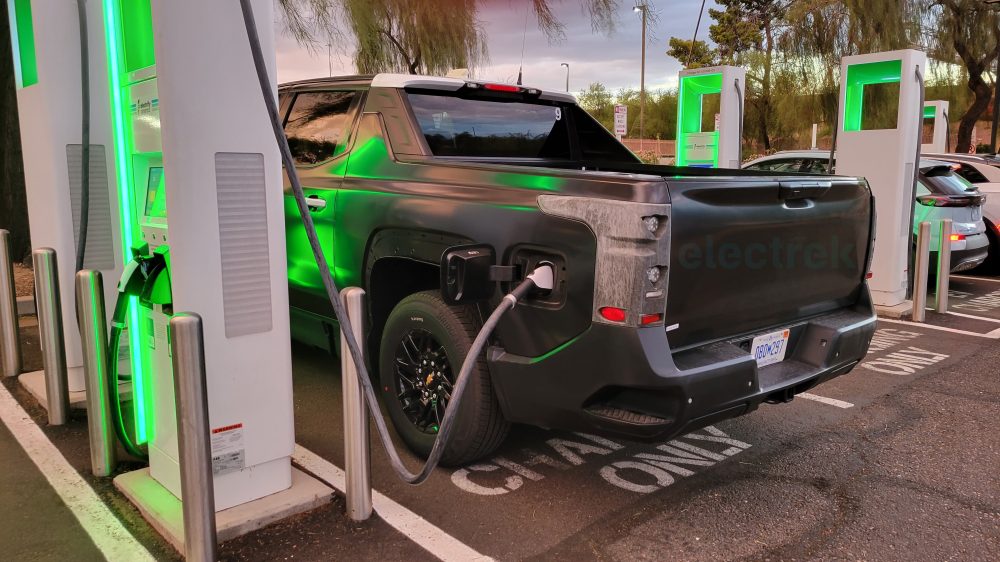 One of the most anticipated EVs of the coming year is the 2023 Chevy Silverado EV, and we’ve now gotten a good look at a testing prototype charging at an Electrify America charging station.

For better or worse, pickup trucks are the best-selling vehicles in the United States by a long way, and Chevy’s Silverado EV will be the first purpose-built EV pickup to hit the streets. Its main competitor, the Ford’s F-150 Lightning, which is already on its second year of sales, is more of a retrofit, again for better (speed to market) or worse (not designed to be an EV).

This Silverado EV appears to have fewer exposed or painted over metal holes in the wheel wells, and we have a much closer look at the vehicle, thanks to Reddit user Snoo74401. We’ve seen a similar, if not the same, truck at GM’s proving ground outside of Milford, Michigan, in an official video. We didn’t get any shots of the speed of charging, though GM says it will top out at a whopping 350kW.

We saw similar mules of GMC’s Hummer EV around ahead of that launch with the same types of trim missing. It is unclear if those pieces of the vehicle aren’t ready yet or if this is a type of camouflage.

It’s also notable that the wheels on this one seem particularly small compared to the prototype Silverado EV that Chevy has been taking on its road show and we got to see last month at the Equinox unveil.

The Silverado also has the sporty but controversial fins, which are reminiscent of Chevy’s own 2001-2013 Avalanche, with some friends and foes calling the Silverado EV the “E-valanche.” While these extremities are going to make those in-bed tool boxes harder to mount, Chevy tells us that the fins are an important part of the aero package and save precious EV miles. Notably, the Silverado EV notches more miles than Ford’s F-150 Lightning 320 mile range, maxing out at 400 miles of range for the top package.

GM says that Chevy Silverado deliveries will begin in the spring of next year, which starts March 2023. The company is already highlighting options including charging and cab features.

2023 is a big year for Chevrolet Ultium EVs with the Silverado EV in the spring, Blazer SS EV in the summer, and $30,000 Equinox in the fall.

We’re not going to learn a lot from these images, though if you are a Silverado EV reservation holder, you are probably champing at the bit for more photos of the vehicle. Even without a lot of the trim, the Silverado EV in these images shows a little bit more of what the vehicle is going to look like in the real world than you’ll get from Chevy’s carefully manicured press images and show cars.

Getting solar shingles? Here’s how your asphalt roofing can be recycled using mushrooms
Why are General Motors (GM) and Ford (F) stock prices falling today?