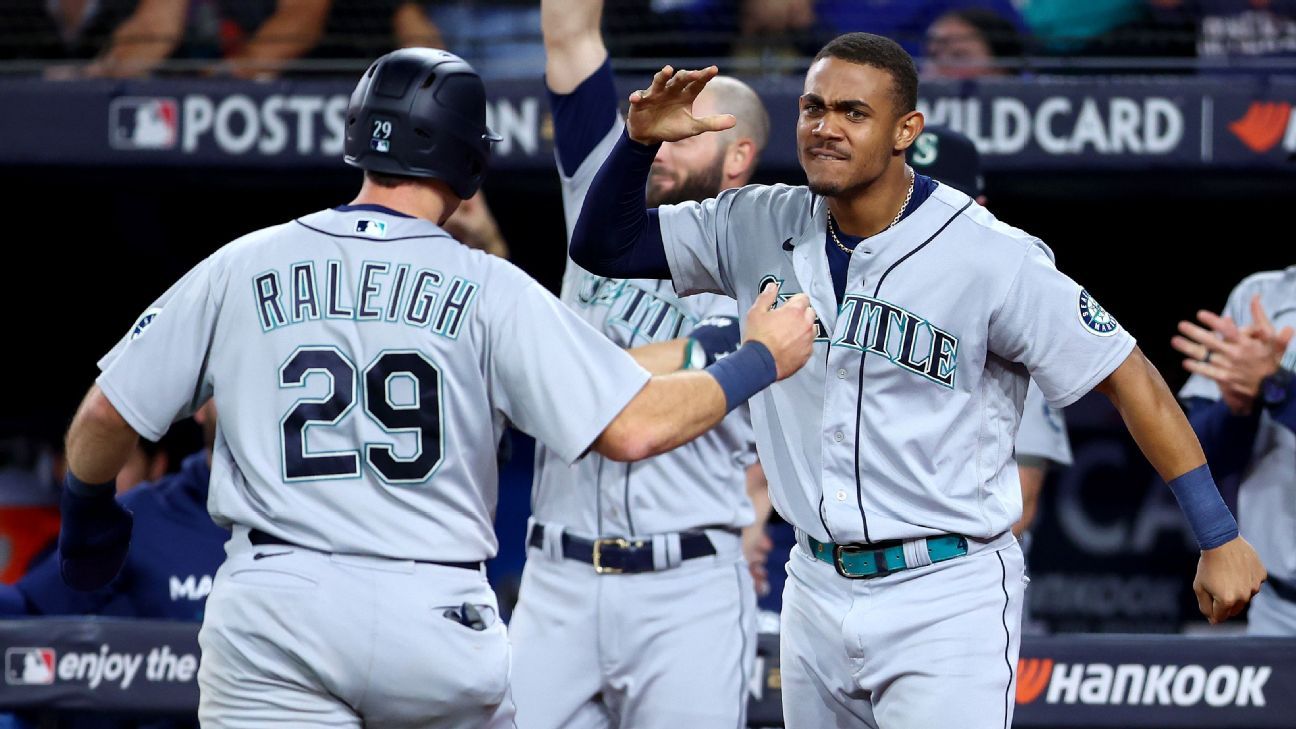 The playoff field expanded to 12 teams for the 2022 postseason, so four best-of-three series determine which teams move on to the division series.

The Saturday festivities began with the Cleveland Guardians beating the Tampa Bay Rays with a walk-off homer in the 15th inning to advance to the division series, followed by the Seattle Mariners overcoming a seven-run deficit to send the Toronto Blue Jays packing with a 10-9 win. The Guardians will take on the New York Yankees in one ALDS, while the Mariners will face the Houston Astros in the other.

Meanwhile, the New York Mets forced a Game 3 with a 7-3 win over the San Diego Padres and the Philadelphia Phillies swept past the Cardinals in St. Louis. Philadelphia will face the Atlanta Braves in the NLDS while the San Diego-New York winner will take on the Los Angeles Dodgers.

After becoming just the third team to overcome a seven-run deficit in a postseason game, Seattle has taken on the look of a team of destiny, or maybe a Cinderella — or as close to one as you can get in baseball.

With emerging heroes such as Cal Raleigh coming to the fore, Seattle has become the first club to survive the road-team disadvantage of the new wild-card format. And because it did, the M’s now have ensured throngs of fans back in the Pacific Northwest that they will get their first taste in 21 years of firsthand playoff baseball. It’s not all magic and fairy tales, to be sure. This team is good. Either way, Seattle is going to be rollicking when the Mariners take on the Astros. This is the kind of team that can capture the imagination of a city … and a sport. — Bradford Doolittle

Seattle’s not done yet!

The legend of the rally shoe. To be told for generations. #SeaUsRise #Mariners #Seattle @komonews pic.twitter.com/NNmRFYjfQJ

Craziest thing I have ever seen. One Mariners fan puts his shoe on his head at the Mariners Watch Party going into the 8th inning. All the other fans do the same. The team then rallies to score 4 runs to tie the game. #RallyShoe #EmbraceTheChaos

SHOES. ON YOUR HEADS. RIGHT. NOW.

The Jays are ROLLING

The @BlueJays have taken a commanding 8-1 lead in Game 2 🤌#NextLevel | #Postseason pic.twitter.com/zAbDXBcx2p

Was it great pitching, poor offense — or a little bit of both? Either way, a lack of runs on the scoreboard was the storyline in Cleveland during a Game 2 that was finally decided when Oscar Gonzalez‘s walk-off home run in the 15th inning accounted for the only run of the game — and completed a two-game wild-card sweep for the Guardians.

Here are a few highlights from ESPN Stats & Information that put in perspective the historic pitching (or lack of hitting) in Game 2:

Next up for the Guardians? An ALDS matchup with the Yankees, which will start Tuesday at Yankee Stadium. One thing Cleveland will hope continues into the next round: Triston McKenzie showcasing that he’s turning into one of the better young pitchers in baseball and a worthy No. 2 starter behind ace Shane Bieber. — Jesse Rogers

The rookie with the walk-off!

And … we’re still scoreless in the 14th inning

Terry Francona has begun warming in the Guardians bullpen.

Both offenses struggling to get on base

No score as we go to the 8th. Only one base runner has reached third. Lonely down here. pic.twitter.com/BSmIOrDfpD

The starters did their jobs

CC in the building

With the season on the line, the Mets got contributions from up and down their roster. Jacob deGrom came through with a strong start, going six innings, allowing five hits and two runs while striking out eight batters. Francisco Lindor and Pete Alonso came through with big home runs, Brandon Nimmo, Eduardo Escobar and Jeff McNeil all knocked in additional runs while Edwin Diaz came into the game in the seventh inning to shut down Jurickson Profar and Juan Soto. The well-rounded effort contrasted drastically from a lackluster Game 1 and the Mets will need more in a winner-take-all Game 3 if they hope to advance to the NLDS. — Joon Lee

And the Mets bust Game 2 open

PETE ALONSO PUTS THE METS BACK ON TOP 😤 pic.twitter.com/lSnGPYOAbl

The Phillies’ Game 1 comeback win was as much about what the Cardinals did or didn’t do as it was about the Phils. Saturday’s close-out win in Game 2 was the blueprint for what a deep Philadelphia playoff will look like. The ace starter goes deep – Aaron Nola in this case, and he was terrific. Jose Alvarado adds a few dominant outs and Rob Thomson pulls the right levers to finish it. The Phillies got a combined 13 scoreless innings over the two games from Nola and Zack Wheeler, just like they would have drawn it up. As for the offense, Bryce Harper got the Phillies on the board with long home run. That, too, is part of any blueprint that sees Philadelphia meeting the massive challenges to come. As for the Cardinals, Albert Pujols finished his career with a two-hit game. But Paul Goldschmidt and Nolan Arenado combined to go 1-for-15 in the series. If we’re talking blueprints, that’s not what the Cardinals had in mind. — Bradford Doolittle

Bryce gets all of one

BRYCE HARPER HITS A DEEP HR TO OPEN IT UP 💪 pic.twitter.com/2MCPSp6XEh