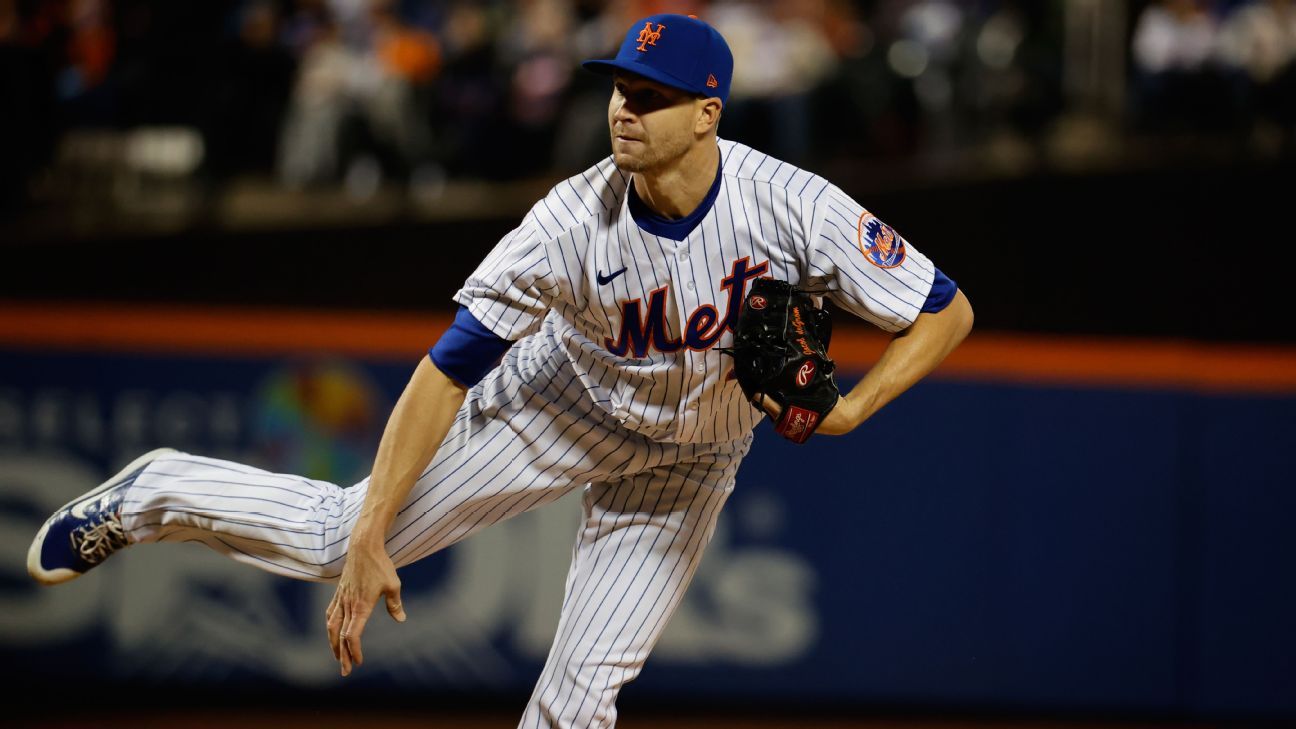 NEW YORK — New York Mets ace Jacob deGrom couldn’t help but ponder his future on Saturday night. With free-agency looming and the San Diego Padres taking Game 1 of the NL wild-card series, deGrom went into his start in Game 2 knowing that if he didn’t pitch well, this could be the last time he pitched at Citi Field as a Met.

“That went into my mind, but the hope was that we would win a baseball game and continue to keep playing,” deGrom said.

He came through, going six innings allowing five hits and two runs on two walks and eight strikeouts across six innings pitched in a 7-3 Mets victory. The win guaranteed that deGrom would have at least one more day to put on a Mets uniform, on Sunday night when the Padres and Mets will play Game 3.

DeGrom set the tone early, starting off the game throwing 12 pitches over 99 mph and seven over 100 mph. He retired the top of Padres’ lineup in order, striking out slugger Juan Soto and Manny Machado swinging. Throughout the evening, deGrom primarily relied on his fastball — which topped 100 mph on 19 of his 99 pitches — and slider, throwing his curveball just twice and his changeup six times. Sixty of his pitches were strikes.

The Padres scored two runs off deGrom, the first coming on a home run from Trent Grisham, his second in as many nights.

“I gotta tip my hat to Trent, that homer, I felt like that was a good pitch and he just got to it,” deGrom said.

“That’s the one I wish I would’ve went fastball,” deGrom said on the Profar at-bat. “Felt like I had a good feel for it, I just threw too many in a row to him and he kept one fair.”

DeGrom felt he hit a groove in his last inning on the mound.

“Slider was good and fastball, actually to [Padres first baseman Brandon] Drury, I threw one down and away where I wanted,” deGrom said. “Early on, they were just a little bit off and not quite the height I wanted them. I felt like I made an adjustment there and the sixth inning, I felt the best.”

After deGrom left the game, Mets manager Buck Showalter made an unusual choice to bring in closer Edwin Diaz in the seventh inning. With Grisham hitting two homers against the Mets during the first two games of the series, Showalter wanted to challenge the Padres outfielder with the team’s toughest reliever before the top of the San Diego lineup came up in a 3-2 game.

Against Diaz, Grisham grounded out before Padres catcher Austin Nola singled up the middle. Diaz then got Profar and Soto to ground out to end the seventh inning.

Diaz returned for the eighth inning. After getting Machado to ground out, he walked Josh Bell and struck out Jake Cronenworth. Showalter then came to the mound to replace Diaz with reliever Adam Ottavino, who struck out Drury to end the inning.

Showalter said he had no intention to have Diaz pitch three innings and finish the game.

“Where they were in the batting order, we had trouble with Grisham,” Diaz said. “I wasn’t planning on pitching a third inning with him. There were things that would have changed that, if he had two eight-pitch innings, I would think about it.”

Diaz asked to stay in the game to finish off Drury, but Showalter said he needed him to be available for Game 3 on Sunday.

“I was feeling great. I thought I could get Drury out, but he told me that he needed me tomorrow and this was enough for today,” Diaz said. “So I said let’s win the game tomorrow.”