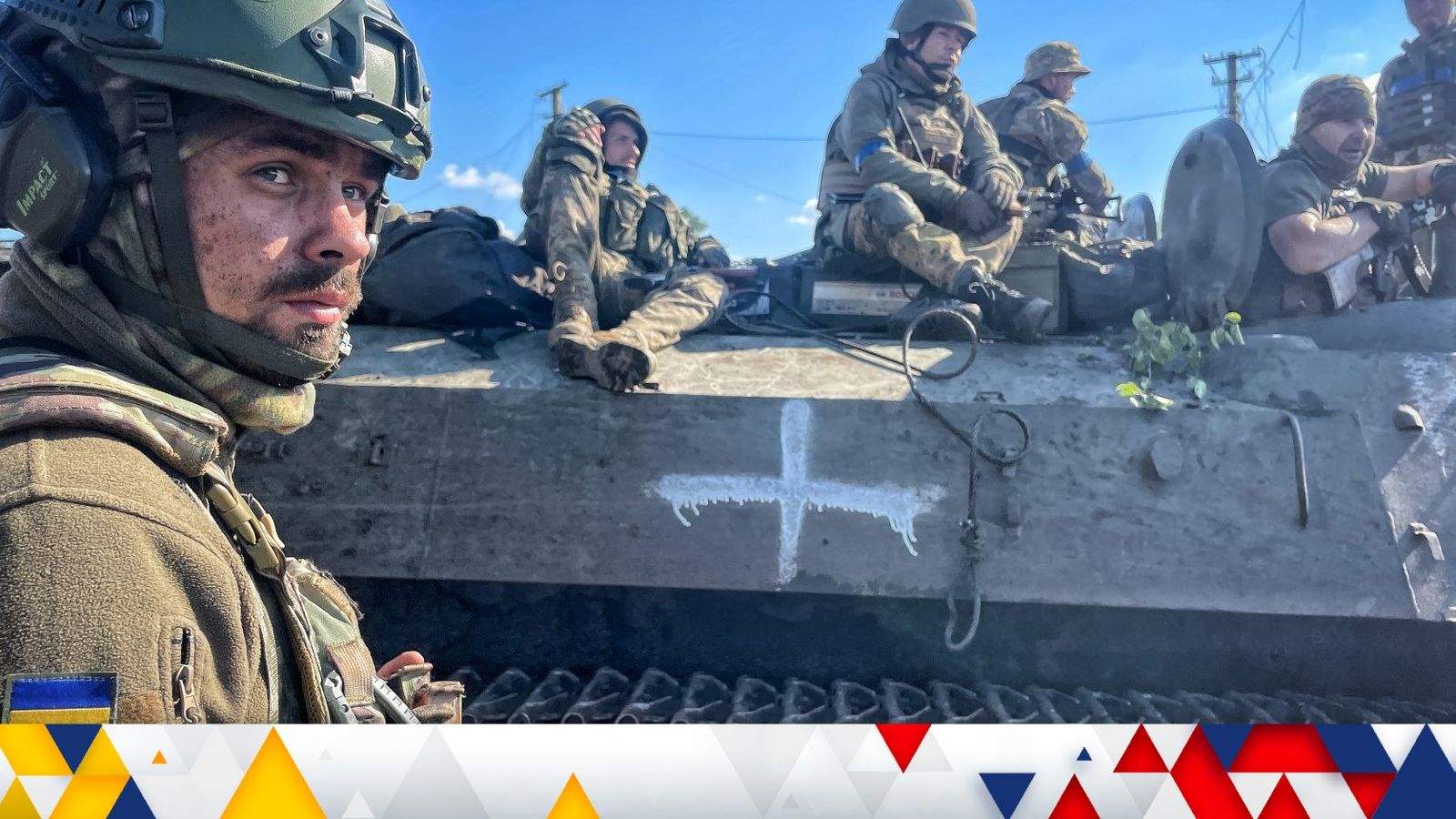 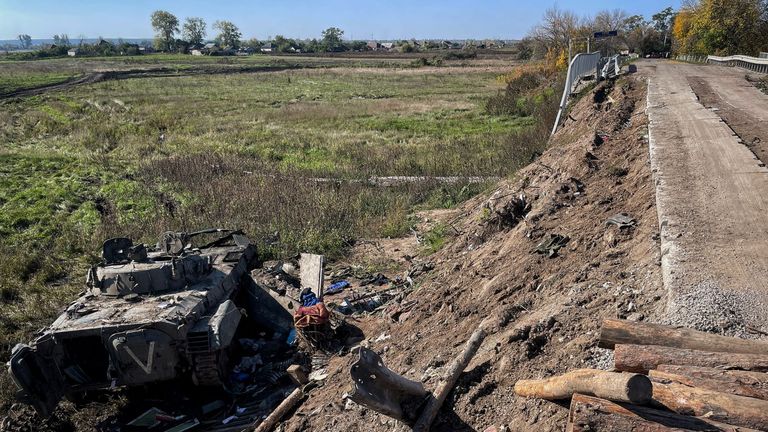 There are a quite shocking number of Russian corpses left in the wake of the Ukrainian blitz on their eastern front.

Kyiv’s troops are moving so fast and methodically, there’s no time to collect the enemy’s dead.

As we followed their route through the village of Yampil and on to Torske on the edge of the Luhansk border, we saw scores of burnt military vehicles and scorched forest trees, which highlighted the ferocity of the battle.

There are repeated signs the Ukrainians have ambushed their enemy, often it seems, laying in wait for them and attacking them from the front as the Russians try to flee to their defensive positions deeper into the Donbas.

The Ukrainians have the city of Kremina in their crosshairs now. Seizing it will open the gateway for them into Luhansk and the entire region, and leave them poised to reclaim the twin cities of Lysychansk and Severodonetsk.

The road from Torske to Kremina is scarred with bombed vehicle wrecks.

We saw Ukrainian soldiers loaded with ammunition and kitbags heading off down the road into Luhansk to do more battle.

“Everything will be Ukraine,” one of them shouted after us with a cheery reassurance. “Hear that?” another called, motioning above us.

There’s a constant backdrop of shelling, of the firing of Grad rockets, and at one stage we hear a jet in the air followed by the terrifying thunder of bombs raining down in the direction of Kremina.

“They will drop more here soon,” he cautions.

The pockmarked yellow bus we are nearby has the body of a Russian soldier hanging out of the driver’s seat. The bus door is open, and his arms are dangling down above the road, as if he’d desperately tried to climb out before death claimed him.

His hands are black with ingrained dirt. His head is gouged open. Death and war are tragically ugly yet simultaneously pitiful.

His relatives in Russia have likely no idea of his fate or how he met his end on this mangled, broken bus at the end of a road pitted with vehicle carcasses.

The stretch of roadway next to the bus is covered in a blanket of Russian uniforms and other discarded clothing and belongings. It’s a chaotic, muddled mayhem reeking of panic and fear.

A short distance away, a woman called Anna, who’s wearing a colourful woollen headscarf, tells us of the ferocious fighting outside the farmhouse where she lives with her husband. She’s only just retired from farming and probably looked forward to some relaxing time after a lifetime of hard graft.

Instead, she tells us how a Russian soldier had run into her yard days earlier, trying to hide from the onslaught.

He was wearing civilian clothes but had a weapon and green army body armour. When he’s gunned down, she can’t bear to leave his corpse on her yard for the birds and rats to eat.

She can’t stop crying, recounting what happened. It’s still very fresh and raw for her. She and her husband drag the body to the field at the back of their home and dig a grave, on top of which they place the green flak jacket.

The documents they find on him show he’s 30 years old and from Moscow.

Explainers:
Why is Cuban missile crisis being compared to Russia’s war in Ukraine?
What nuclear weapons does Russia have?

“He was the first military person I’d ever seen dead,” she tells us between sobs.

“I felt nothing, nothing. He came to kill us.” But her voice trails off as she’s enveloped by weeping.

The trauma of this war has not yet stripped Anna of her basic humanity. He’s around the same age as her own son. Another young man dying in a war he never chose to fight in.

The shells keep landing close and make her constantly flinch. “It’s so scary. It’s so, so, scary,” she says. “When the houses are on fire, it’s terrifying.

In the midst of horror

“This house was burning just here.” She nods towards her neighbour’s home.

We ask if she’d prefer to go to her shelter to hide for a bit and feel safer.

“Can I go? Is that OK?” Even enduring all this death and torment, she’s unfailingly polite to strangers.

She hugs our Ukrainian colleague Artem, who’s around the same age as the dead Russian soldier. He’s a warm, friendly face to her in the midst of this horror.

And yet all the political talk is of worse to come – an impending tactical nuclear attack. It’s a threat US President Joe Biden appears to be taking seriously, and which the Ukrainian troops we spoke to seem unnervingly prepared for.

“We’re not afraid of nuclear or chemical weapons. We’ve started, and we won’t stop until we liberate all our land.”

The rest of his unit sitting atop their armoured personnel carrier are equally undeterred by the nuclear threat.

“Mentally I’m ready to die,” Oleksander says, “so if it (a nuclear attack) happens, then it will happen.”

When you’re prepared to give your life in a war, the manner of that dying takes on a very different significance, it seems.

We travel with the crew across an increasingly boggy forest with pools of muddy water dotted everywhere.

The seasons are rapidly changing, and the incoming inclement weather is what the Ukrainians are trying to get ahead of.

Only military vehicles can easily traverse terrain so taxing, and the deteriorating conditions will challenge even these.

The Ukrainians are in a race against winter as well as a ferocious battle with Russian troops – and they cannot afford to lose either.