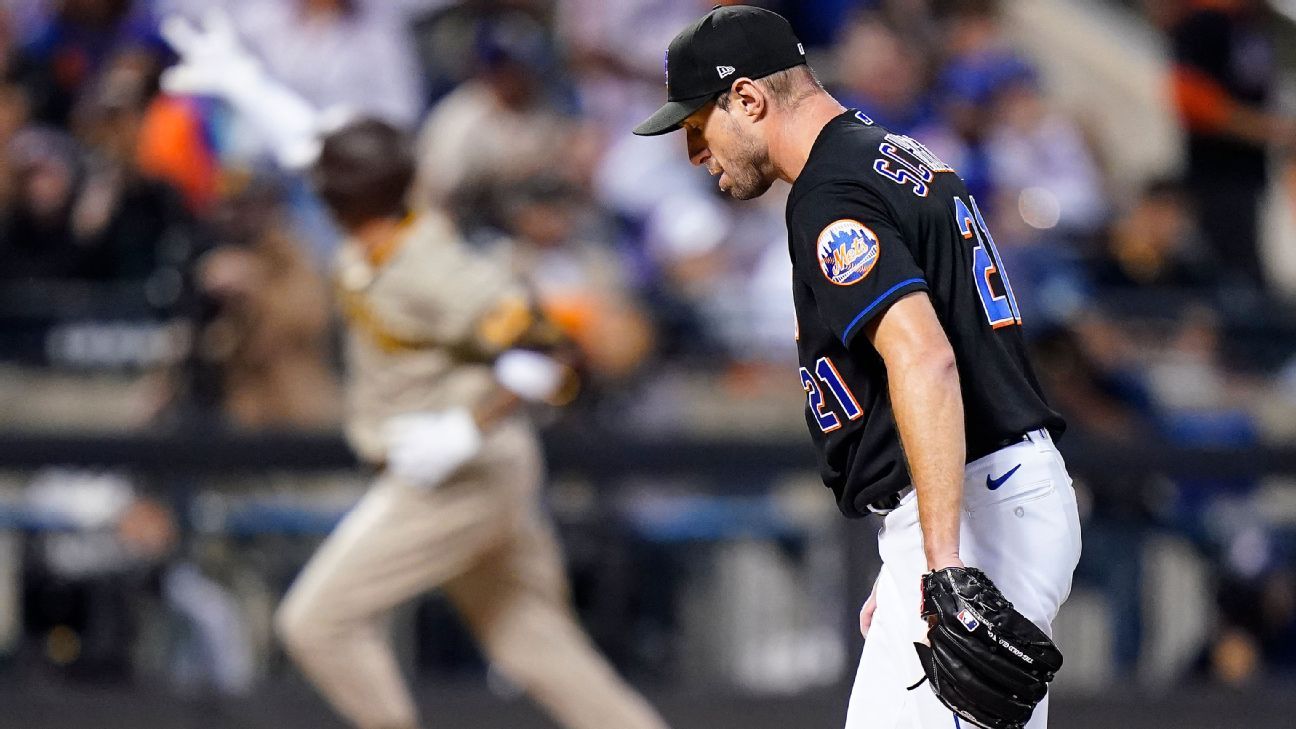 NEW YORK — The dreams of Mets fans were supposed to come true on Friday night. When Max Scherzer signed a three-year, $130 million contract with New York, the wild-card series opener was the type of game Mets fans imagined the future Hall of Famer would dominate, an important moment setting the tone for a team ahead of a playoff run.

Instead, those fantasies were shattered as Scherzer unraveled in his start against the San Diego Padres, allowing seven earned runs on seven hits — including giving up a career-high four home runs — while striking out just four batters in 4⅔ innings in a 7-1 loss by New York.

Hours after Scherzer left the Citi Field mound, the moments of struggle played on a loop in his head.

“This is going to be a late night for me,” Scherzer said.

The damage started in the first inning when Padres designated hitter Josh Bell slugged a 419-foot opposite-field home run that scored Jurickson Profar. Outfielder Trent Grisham added on in the second inning, hitting a home run to right field to extend the Padres’ lead to 3-0. But the final straw for Scherzer’s evening came in the fifth, when Profar hit a home run to right field, scoring Ha-Seong Kim and Austin Nola, followed by a Manny Machado solo blast to left-center field, sending the Mets starter off to a chorus of boos from the 41,621 fans at Citi Field.

The Mets — who won 101 games in the regular season, led the division for 174 days but ended up as a wild-card team — now face elimination on Saturday with the Padres sending former Cy Young award winner Blake Snell to the mound.

“We ended up with the same record as somebody else in our division, and we’re getting an opportunity now,” Mets manager Buck Showalter said. “We’ll get one tomorrow to right the ship.”

Scherzer uncharacteristically struggled with his command throughout Friday’s outing; the seven earned runs were the most allowed by Scherzer in a postseason outing, his previous high coming in a 2011 ALCS loss while a member of the Detroit Tigers.

After examining video from his start, Scherzer said his fastball did not have the same movement that it typically does, sinking instead of rising.

“I wasn’t able to command that fastball the way I usually can,” Scherzer said. “That’s my bread and butter to be able to set up everything else. When my fastball’s flat and then running, that’s usually when I get hit a lot. Obviously, tonight I got hit a lot.”

It was the second straight disappointing start from Scherzer; he previously allowed four runs on two home runs and nine hits in 5⅔ innings pitched against the Atlanta Braves in a crucial start that led to New York falling out of contention for the division title.

Scherzer previously made two stints on the injured list, once in May with an oblique strain and a second in September with left side fatigue. When asked if injury played a role in his recent struggles, Scherzer said they did not factor into his performance.

“I had a feel for what was going on in the Atlanta start,” Scherzer said. “I thought I made the adjustment to get me right. Tonight, I don’t know why the fastball ran. I don’t know why I didn’t have my good fastball, the way I can usually pitch and locate.”

The performance contrasted dramatically with the performance from Padres starter Yu Darvish, who dominated the Mets lineup throughout the game, allowing just one run on six hits in seven innings.

“Obviously Max, with the expectations that he has for himself and what he’s done for us and throughout baseball, but Darvish is on top of his game and we knew that was going to be a challenge,” Showalter said. “He’s just got so many things you have to defend.”

That Darvish was on top of his game meant the Mets needed Scherzer to match the Padres ace. Instead, he fell way short.