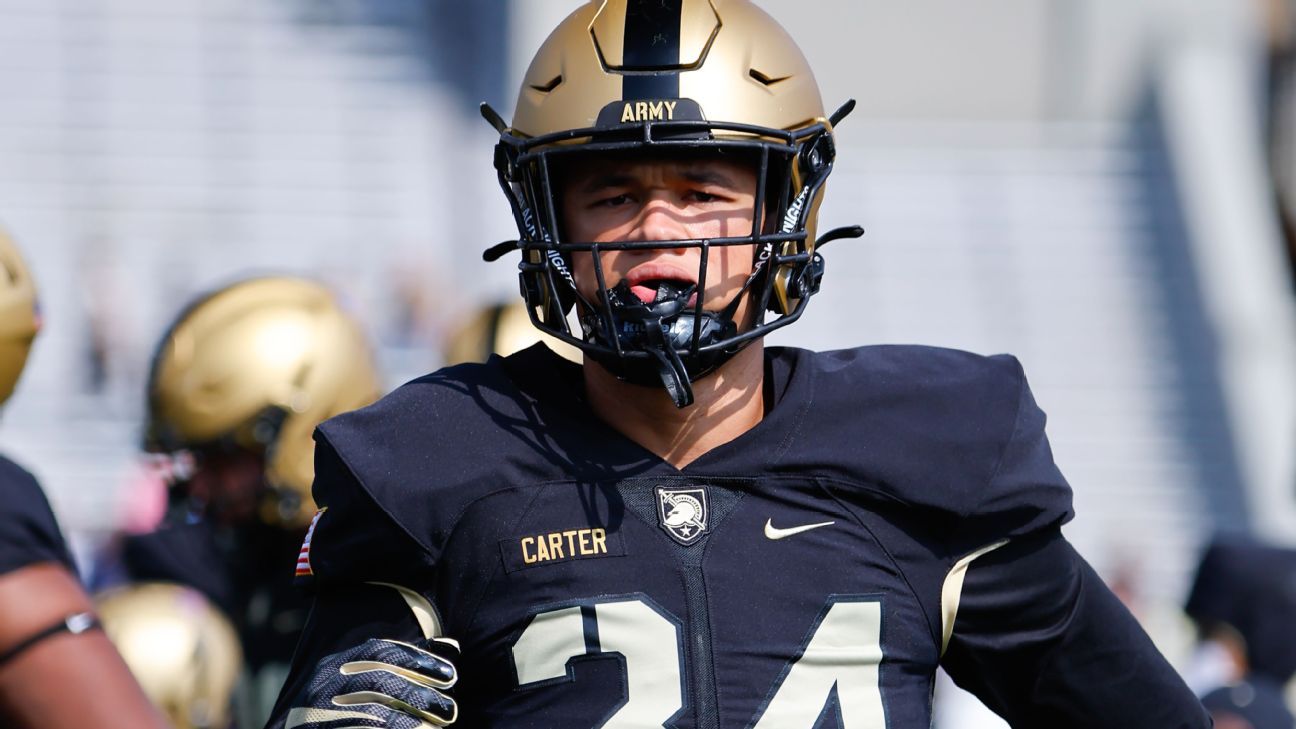 Andre Carter II is a 6-foot-7, 260-pound senior who has taken the long road to West Point and soon will be able to say he has taken an even longer road to the NFL. Like seemingly everything else at Army, Carter is a history lesson. One year ago, he was named to the AP All-American team, the first Black Knight to make that list in 31 years. That’s what happens when you trail only Alabama’s Will Anderson in sacks with 15.5, one and a half more than Heisman Trophy finalist Aidan Hutchinson of Michigan.

Carter is the player of whom then-Wisconsin head coach Paul Chryst said, “There are guys that when you watch film you think, ‘Okay, if we don’t keep an eye on him, he will kill us.’ And this kid is that kid.”

When he made his first collegiate start in late 2020 against Georgia Southern, he registered a sack, a forced fumble, an interception and a blocked kick, prompting Eagles head coach Chad Lunsford to quip, “Make that guy a general right now.” And just this week, No. 15 Wake Forest‘s Dave Clawson spent his Monday presser reading off Carter’s statistics ahead of Saturday’s visit from Army (7:30 p.m. ET, ESPN3).

Carter entered the fall as not only a preseason All-American, but a fixture on every mock NFL draft board as a can’t-miss prospect. In their latest player rankings, ESPN’s Todd McShay had Carter listed as the second best OLB behind only Anderson and the 14th best athlete overall. Mel Kiper Jr. has him even higher, ranked second at OLB behind Anderson and 11th overall.

“His wingspan is incredible,” Kiper says. “His length is his strength. He’s lean. He’s smart. When you watch his tape, it’s like you’re rewinding and watching the same play over and over because he’s that consistent. Because of that, I think he will be able to step into any defensive scheme and make an impact.”

If McShay’s and Kiper’s projections become reality and Carter’s name is called by the NFL commissioner on April 27, 2023, he will become the first Army first-round pick since 1947. Even if he were to unexpectedly fall to the second or third day of the draft, he still would be the team’s highest selection of the Super Bowl era.

Since 1969, only two Army players have been taken by NFL teams, both in the seventh and final round and the last being defensive back Caleb Campbell in 2008. There are currently two Black Knights in the NFL and one player each from Air Force and Navy. All were signed as free agents.

“I know people wonder how I ended up here, at Army,” the soft-spoken Carter says, having just finished morning drills, physical education and international relations classes, lunch, followed by football film study and practice. “It was a two-part decision. I knew that this place, just being here, is an honor. Serving my country is an honor, and I look forward to serving my country for a long time. But I also knew that you could go to the NFL from here.”

Sitting in the team cafeteria, Carter is reminded of all his stats — and lack of them. He gestures with a hand toward the photos on the walls of the lunchroom featuring plenty of great Army players who never saw a minute of NFL playing time.

YES, THE RULES are different now. They have been since 2019, when the Department of Defense instituted a new policy that allows any service academy athlete to request a deferment of their required military service until the end of their professional playing days. The granting of such a request is not guaranteed and the military reserves the right to call those athletes into active duty if they deem it necessary.

It’s a far cry from the days of 1963 Heisman winner Roger Staubach, who didn’t play in the NFL until 1969 as he served in the Navy, or Napoleon McCallum, who was assigned a Naval post in Southern California while he played for the Los Angeles Raiders.

For decades, the small handful of NFL- and NBA-worthy service academy graduates worked with their respective branches to try and creatively work around the restrictions. That ended (though not without some continuing pockets of political resistance) when the Trump Administration started a push to change the rules after his meeting with the 2018 Army team to commemorate it clinching of the Commander-in-Chief’s Trophy over Air Force and Navy.

The following summer, a new plebe arrived on campus named Andre Carter II. He was signed out of Cheshire Academy in Connecticut, where he had moved after attending one high school in California and two more in his hometown of Houston. He was the youngest of five siblings and the son of two athletes in his mother Melissa and father Andre Sr., a former lawyer and retired airline employee-turned-franchisee in the pizza and check-cashing businesses.

“Dre was the kid who never made a fuss about anything, and he is still so soft-spoken,” Melissa says of her son. She recalls a phone conversation just this week when she had to drag it out of Andre that he had just spent the day with a College GameDay TV crew. “Whatever food I put in front of him, he ate it, and whatever clothes I laid for him, he wore it. He never got excited about much. Until football. That was the first time when he really took charge, like, ‘Mom, I have to do this and this if I want to be as great as I want to be.’ He loved football so much.”

That affection was developed on Sunday afternoons, hanging out with his father, a Chicago native, and rooting for their beloved Bears. “Their offense was always letting me down, though, so maybe that’s why I loved watching defensive players,” Carter says, groaning at the recollection of the 2000’s Bears. Little Dre loved Brian Urlacher, Julius Peppers and, later on, Khalil Mack. He loved dudes who got after quarterbacks.

“But he was so tall and lean, there was no question that he was going to be a receiver, a tight end,” Andre Sr. says. “So, that’s what he became in high school.”

The problem was he never played. He needed to put on weight, and at his first Houston high school he was stuck behind a four-star tight end in Mustapha Muhammad. By the time he transferred and played his senior year at Western Christian, FBS college scouts were busy watching others. His high school graduation came and went with only a couple of nibbles from FCS and Division II schools.

So, his mom tapped into her legal research skills and started looking for another option. That’s how her son ended up moving to New England to play for Cheshire and head coach Dave Dykeman, now director of special football projects for the XFL. As soon as Dykeman saw the 6-5, 220-pounder he informed Carter he was now playing defense.

“I really loved rushing the passer and it came to me faster than expected,” Carter says, admitting maybe watching all those Bears defenders with his dad had paid off. “And because I had always been a receiver, I think that helped me drop back into coverage easily. It really helps to have spent so much time on the other side.”

Barely a month into his fifth high school season, Dykeman had called his friend and longtime Army assistant coach John Loose, telling him West Point had to see this kid. This is how recruiting has worked during the Monken era because it has to. Army doesn’t have the ability to pick and choose five-star prospects like an Alabama or Ohio State, just as those Power 5 schools don’t have to grapple with the looming questions and uncertainty that comes with the U.S. military academies admission process or doubts from players and families about the lifestyle.

Instead, they blanket the nation with thousands of names. Monken estimates 10,000 player evaluations per recruiting cycle. But so many diamonds in the rough are still uncovered by knowing a guy who has a kid he believes Army needs to know about.

ANDRE CARTER II is now the literal poster-in-the-lobby child of that approach. He enters that lobby by walking past the three Heisman Trophies earned by Army running backs, Pete Dawkins in 1958 and two of Army’s only three first-rounders, Doc Blanchard in 1945 and Glenn Davis in 1946. When he lifts weights with his teammates, he does so under the watch of bronzed eyes, a statue of those three and their coach, Red Blaik, the only Army head coach with more wins than Monken.

Carter admits he hasn’t done enough research on the men immortalized in that sculpture, or any of the countless plaques and memorials throughout West Point. But the linebacker’s embarrassed, respectful apology is qualified with, “They keep us pretty busy. And when they don’t, I get busy anyway.”

“You can’t keep him out of the film rooms, like a Peyton Manning or Tom Brady,” says Army defensive coordinator Nate Woody, who spent 2019 at Michigan as a defensive analyst working with, among others, Aidan Hutchinson. “If there’s a session during practice that he’s not in, like a special teams session, he will disappear, having run upstairs to the office to watch what we’ve just done in defensive sessions. After every game he comes into my office, and we sit down and dissect the film from the previous game. What he could have done. What the other team was trying to do. It’s a total awareness. And because of that he has that rare ability to affect what the opponent is doing. Next level stuff. It makes a coach like me look really smart.”

It also makes one second-guess some of those coaches who wouldn’t give Carter reps high school. Or, all the college coaches who didn’t so much as send Carter a postcard during his fourth and fifth seasons of prep football.

Mention that and finally you elicit a hint of a rise from the soon-to-be U.S. Army officer.

“Everybody makes such a big deal about the competition and the Power 5s. When I play against those guys, it’s like, ‘Oh, like I deserve to be here.’ Army deserves to be here. These guys aren’t necessarily better than me. We can compete with anybody.”

Carter sits at attention as he continues. He knows, at 1-3, it has been a disappointing year for Army so far. But he also knows there is time to save the season. Time to upset a ranked team. Time to win that Commander-in-Chief’s Trophy. Time to, as is plastered on every wall in the building, BEAT NAVY. Time to move up that draft board.

In other words, it’s time to do what they’ve been doing at West Point since Washington sent orders to the Continentals to start building walls and pulling chains. It’s time to play defense.

“All these teams that we play didn’t even look my way in high school,” Carter said. “So, I kind of want to make them pay for that just because they didn’t even think about recruiting me. They were like, ‘We’ll take you as a walk-on, maybe.’ So that’s always a chip on my shoulder. I keep it right there. I defend it and I defend this team, whatever we have to do.”