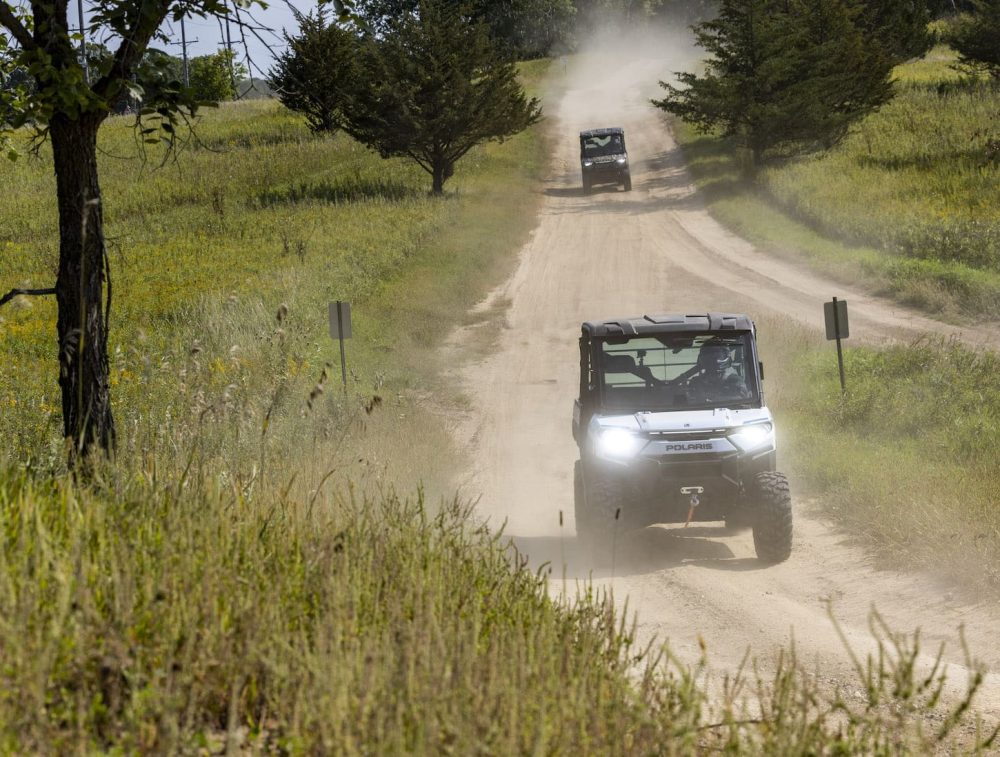 I was recently invited on an eye-opening trip to visit the sprawling Polaris proving grounds in Wyoming, Minnesota. There, over 600 acres feature 17 miles of trails carved from the earth to test Polaris’ off-road vehicles through a range of heavy duty scenarios. And with the company’s exciting new all-electric RANGER XP Kinetic set to roll out to customers next year, I was stoked for the chance to get an early test on the new utility side-by-side.

I should preface this with the fact that I haven’t actually driven a gas-powered Polaris RANGER before. In fact, I’ve never driven any side-by-side. I’m normally a two-wheeler guy, but I jumped at the chance to test this thing out, and to push it HARD. Coming from motorcycles, I must say it’s amazing how much fun you can have when you don’t have to worry about little details like, you know, tipping over.

Though I did get that electric side-by-side up on two wheels more than once, which is a testament to just how much power the RANGER Kinetic XP has. You can go from a stand still to a hair-raising two-wheel ride in just a few seconds flat.

There’s a reason the Polaris engineers call it the “best and most powerful RANGER ever built.” It bests every gas-powered RANGER that came before it when it comes to power, throttle control, ease of use, reduced maintenance, and just about everything else.

Check out my testing video below to see me putting the RANGER XP Kinetic through its paces.

The beauty of the Polaris RANGER XP Kinetic is the way it combines the electric motorcycle drivetrain from Zero Motorcycles with the long-standing Polaris RANGER vehicle design, including all the years of ruggedization testing that have gone into the vehicle’s gas-powered older brothers.

If you’re already familiar with the existing RANGER line, then you’ll instantly feel at home in the electric model. Outside of a few key giveaways like the lack of a grille, it’s hard to tell the two apart at a quick glance. Around 95% of the RANGER 1000 accessories are compatible – that’s how similar they are.

The real difference is in the powertrain and in the interface.

The controls are simplified, and you get new fancy features like the RIDE COMMAND screen that adds connectivity and functionality, including features like waypoints for marking important points (that’s where I dropped off those hay bales or left that deer…), viewing the GPS markers of other RANGERs in your group (great for fleet operators or larger farm/ranches with many hands operating multiple vehicles), and a pile of other fun features I didn’t even get a chance to try.

But let’s get real – the biggest difference is, of course, the performance. It’s night and day, and that’s why the Polaris engineers aren’t shy about calling the RANGER XP Kinetic the best RANGER they’ve ever built.

I was flying around turns, shooting up inclines and bouncing over obstacles without a care in the world. The journalist driving in front of me hit a damn tree and no one even noticed, including him! That’s the power we’re talking about here, people.

That Zero motor has been custom modified by Polaris, and the side-by-side is using that 110 horsepower to perfection thanks to the engineering team expertly marrying it to the RANGER’s existing vehicle platform.

Work or pleasure? How about both!

The RANGER line is of course about utility. Polaris has other fun vehicles that are pure recreation, but the RANGER is about getting stuff done. But with this new electric drivetrain, it’s so responsive and powerful that it feels like a joyride anyways.

I was driving it like a dune buggy, getting as much air as I could on ever bump and keeping as few wheels on the ground as possible at any one time.

But when it comes to what it’s designed for, actual honest to goodness work, that’s where I think it is really going to shine. Because everything that went into the electric drive also helps make it that much more potent for utility tasks.

The extra power and torque give it huge towing and hauling capabilities (2,500 pounds and 1,250 pounds, respectively). The low noise means you can operate early in the morning without bothering anyone – get an early start plowing snow without waking the neighbors.

The quiet operation is great for hunters or photographers trying to get deep into the woods without a loud engine scaring off the animals before they can get in range for the perfect shot.

The precision control that comes from the electric motor makes reversing, parking, lining up a tow hitch, and other tight quarters operations that much easier.

And maybe that was it, who knows? These were prototype vehicles, after all. But that’s another cool thing about electric – all that fix takes is a laptop and a data cable. Done!

Want to make modifications or change the torque profile on a gas engine? Cool, start boring out a cylinder or swap a connecting rod. Have fun with that. Want to do it on an electric vehicle? Ok, plug in this USB cable. Done! I don’t envy being an engineer on the ICE team.

Everything is just simpler when its electric, and it just works better. Instead of an ICE engine with hundreds of moving parts, you have a more powerful electric motorcycle with a single spinning shaft.

Do you really want to be dealing with clogged air filters or fouled spark plugs when you’ve got a job to do? No, you just want your vehicle to work. And electric just works. Fewer parts, fewer problems.

BuT WhAt aBoUt tHe RaNgE?!?

So here’s the part where people start to go something like this: “Sure, Micah. You had fun for an afternoon. But what’s the range? Will it work on my 90,000 head of cattle ranch that stretches from Austin to Anchorage?”

That’s enough for you. I know you think it isn’t, but you’re probably wrong. 1 in 10 of you might be right, but that’s enough range for most anyone using these for either recreational or real utility work around the farm. Not only do they charge up straight from a Level 1 or Level 2 charger enjoying 120V or 240V charging, but you can probably do everything you need in a day on a charge.

And now you’re scoffing and saying, “I don’t get it.” But you know who does get it? Polaris. One of the engineers mentioned to me how a big part of the battle is just helping people realize that what they think they need and what they actually need are two different things. When surveyed in the past, many RANGER owners said they rode about a 100 miles a week and average around 35 to 40 mph. When checking data-loggers, it turned out they did more like 20 miles a week and and averaged 17 mph. Whoops.

It feels cool and all to think you’re the biggest baddest rancher of them all and that 80 miles per charge isn’t enough for you, but the truth is, a single charge will last most users for days. Plus refueling is even easier since you do it at home in the garage or barn instead of ferrying red gas cans back and forth each week. And realistically, if you actually are the biggest baddest rancher of them all, then you’d want the most powerful, most capable RANGER of them all. And objectively speaking, that’s the XP Kinetic.

If you ever hear a RANGER coming, you’ll know it’s not as powerful or capable as this one.

Hyundai opens reservations for the first hotel powered entirely by EVs, complete with a restaurant, bar, and cinema
Uber deploying Motional IONIQ 5 driverless robotaxis to millions of riders over the next decade