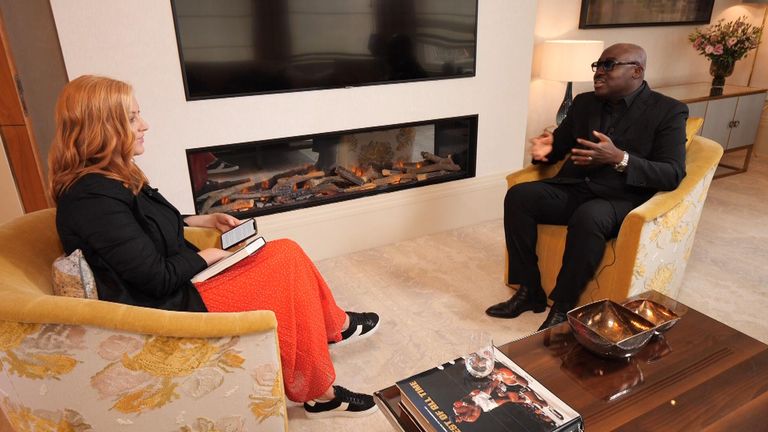 Vogue UK editor-in-chief Edward Enninful – a former refugee – is calling for a “more helpful and inclusive policy” to replace the government’s plan to send migrants to Rwanda.

Telling people they are not wanted is a “problem in itself”, he told Sky News, and we could be “turning incredible people away”.

“You might be saying no to the next doctor who’s going to discover (a) the vaccine or the next prime minister,” he explained.

Enninful, 50, came to Britain after fleeing Ghana with his family in the 1980s. They lived in London’s Ladbroke Grove where his mother worked as a seamstress.

His new memoir, A Visible Man, documents more than just his fairy tale rise to the top of the fashion industry – it also relates what it was like to be a black gay working class refugee in Britain.

“This country was built on refugees,” he told me. “People from India, people from Africa, from the Commonwealth.”

The new home secretary, Suella Braverman, has said she will find a way to “make the Rwanda scheme work”.

Enningful has grave concerns, however. “You know, I’m a refugee and I think refugees contribute to the country so we have to have empathy,” he said.

“I feel that sending people to Rwanda is not really the solution. Sometimes empathy is quite hard for people to show (but) I think that’s the only way forward when it comes to refugees.

“I would love to see a more helpful, inclusive policy in place.”

How does he feel about Liz Truss’s new cabinet? It is the first time that none of the four highest offices of state – prime minister, chancellor, foreign secretary and home secretary – is held by any white men.

Enninful is cautious – saying it’s not just about seeing different faces but about feeling real change – something that, in his mind, hasn’t happened yet.

“I think we all should do better,” he said. “Anybody with a platform, any sort of famous person of colour should really do better.”

Asked about Rishi Sunak missing out on becoming the first prime minister of colour, he said it simply wasn’t the time but is hopeful that day will come.

As for whether Liz Truss will fulfil her dream of appearing in Vogue – as revealed by Scottish First Minister Nicola Sturgeon – the fashion jury is out.

“We feature people who have something to do with the zeitgeist,” Enningful said, speaking last month.

“So I’ll let you know. We’re waiting to see how she progresses and then we’ll have that conversation again.”

A new trend Enninful is not a fan of is being “anti-woke”.

“To me the word woke… I don’t even know what it means,” he said.

“You know, I’m a result of wokeness if you want – I was somebody who was welcomed into the UK.

“So, for me, a country that is unified regardless of your background will always be a great thing for me, and so I don’t really take that word on board.”

Enninful prefers the term inclusion to diversity, and does not shy away from controversial topics and big issues – either in the glossy pages of his magazine or in conversation.

He also celebrates the fact that other publications are following suit.

In Vogue, he is planning more inclusivity and less celebrity. The success of a cover featuring essential workers got him thinking.

“I’d love to have more real women on the cover,” he said.

“Represent the worlds that they’re in.”

Annie Ernaux awarded 2022 Nobel Prize in literature: ‘She writes about things that no one else writes about’
Samantha Womack updates fans on treatment following breast cancer diagnosis