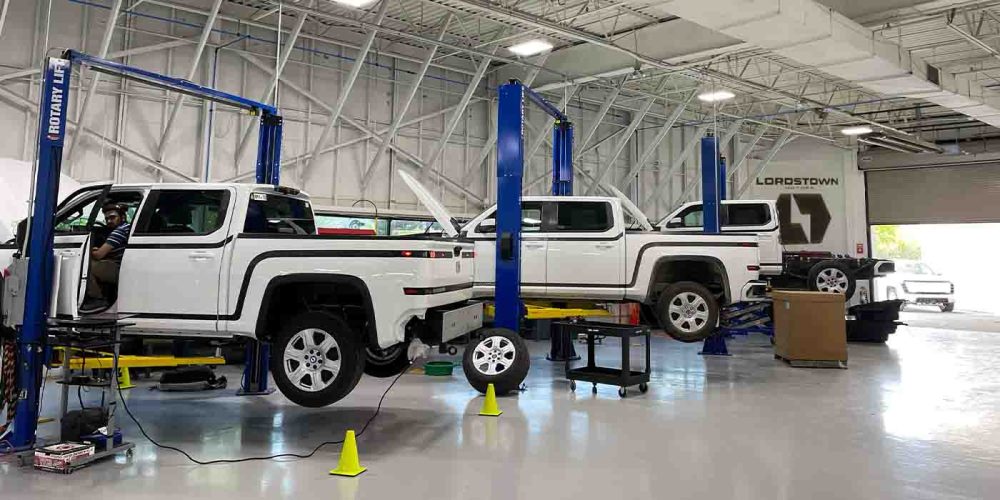 After a tumultuous four year journey to this point, Lordstown Motors has announced it has finally reached that pivotal moment in any flagship EV lifecycle, the start of commercial production. The American EV automaker shared that it has already completed two production-ready Endurance pickups as part of a slow ramp up in Lordstown, Ohio toward 500 units that will begin sales next quarter.

As you may recall, Lordstown Motors ($RIDE) is a relatively young EV automaker that came out swinging with the prospects of its flagship EV, the Endurance pickup truck. Following initial financial backing from General Motors – the former owners of the Lordstown manufacturing facility in Ohio – and over 100,000 reported reservations in place, there was a lot to be excited about surrounding this new brand… at least for a while.

Things began to sour for the automaker after one of its early prototypes caught fire in early 2021, quickly followed by a less than stellar performance at the San Felipe 250 due to incorrect estimates of the pickup’s energy consumption.

Despite two beta versions of the Endurance rolling off the assembly lines, Lordstown continued to take steps backward, losing its CEO and CFO to resignations in June of 2021. By October, Lordstown was shopping around its manufacturing plant with hopes that someone else would come in and build the Endurance EV for it.

Chinese manufacturing expert Foxconn answered the call, and by this past May the sale was complete. Foxconn’s chairman also vowed that Lordstown Endurance deliveries would begin before year’s end. We’re still not sure if the companies can make good on that promise yet, but it appears that sales are going to begin very soon following the official start of commercial Endurance production.

The American automaker announced its trickled start of production in a recent press release, relaying that two Endurance pickups have rolled off the assembly line with a third not far behind. Lordstown was candid in stating that the ramp of of Endurance production will be slow to begin and its acceleration will be governed by a number of factors including supply chain constraints, engineering readiness, quality checks, and part availability.

The initial batch of Endurance pickups planned for Foxconn’s Lordstown facility is 500, but the automaker is already taming expectations for 2022, sharing it expects to only deliver 50 trucks before the ball drops in Times Square. The other 450 trucks or so are expected to deliver in the first half of 2023, pending “sufficient capital” required to keep going. Per the release:

We anticipate ending the third quarter with approximately $195 million in cash and cash equivalents, including $27.1 million of proceeds from equity issuances during the third quarter of 2022.  We now anticipate ending 2022 with approximately $110 million in cash and cash equivalents, excluding both any additional capital raises and funding of any contingent liabilities.  Our cash outlook is better than our previous outlook by approximately $75 million and we continue to explore opportunities for capital raising alternatives, including in connection with the initial Foxconn JV program and strategic partnerships.

Despite the looming need for more cash, Lordstown is pushing forward to get this first small group of Endurance trucks out in 2022. Crash testing is already complete and automaker says it has already submitted applications for EPA and CARB certification, imperative to the start of sales. Lordstown says it will continue to work through other additional vehicle certifications and software updates ahead of a start of sales sometime in Q4.

Check back with Electrek when we get those ever-so important EPA ranges and pricing. There will be lots of eyes on the Endurance pickup to see where it lands price- and performance-wise in a growing electric pickup segment.