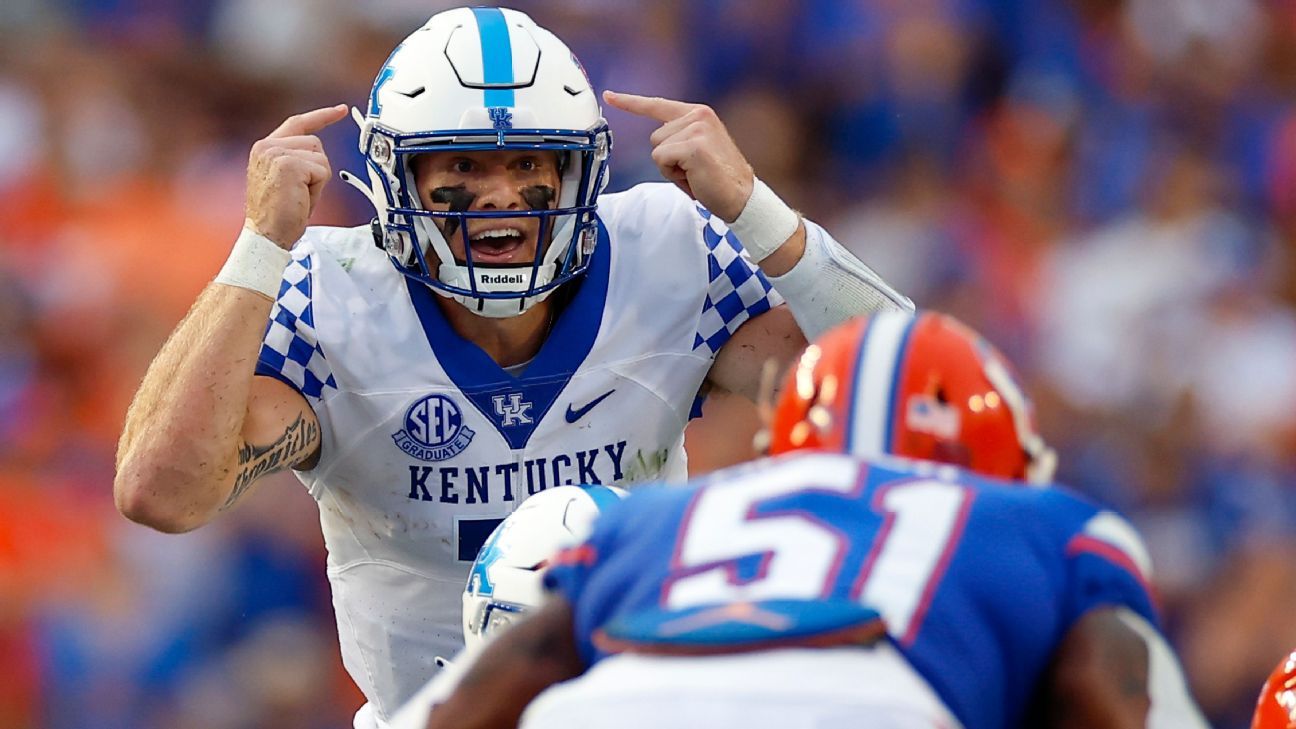 LEXINGTON, Ky. — Rich Scangarello was sitting in the

“The spring before his senior year, we had tons of colleges on campus checking him out, but he couldn’t get a bite. Sometimes, there’s that stigma that players from the Northeast get, that we don’t play football up here the way they do down South or in Texas or in California, and this guy can’t be that good.

“Well, actually, he can be that good.”

“He came in there and was lights out, and it was not hard to see how talented he was,” said Old Dominion coach Ricky Rahne, who was Penn State’s offensive coordinator in 2018 and 2019. “He didn’t miss a throw and was an incredible athlete.”

Rahne walked over to Joe Moorhead, who was then Penn State’s offensive coordinator, and said, “Joe, we’re crazy if we don’t offer this kid,” to which Moorhead responded, “Yeah, I was thinking the same thing.”

Levis redshirted his first season at Penn State in 2018, and Moorhead left for the Mississippi State head job after the season, with Rahne promoted to offensive coordinator. He said it was never a case of the Nittany Lions not believing in Levis, but rather that they were winning games with Clifford and he was more equipped at that time to be the starter.

“Everyone always asks what happened and why Penn State didn’t start Will over Sean,” Rahne said. “When we first picked Sean, Will wasn’t ready to start yet, and then it became hard to replace a guy who had won 11 games. People kind of forget that.”

Rahne’s only question about Levis, whom Kentucky coaches and teammates readily admit plays with a linebacker’s mentality, was whether he could harness his intelligence, competitiveness and will to succeed so he could play with the steadiness needed for an elite quarterback.

“That was sometimes his greatest detriment,” Rahne said. “He wanted to be so successful that he put so much pressure on himself that it made him play a little tight sometimes. At Kentucky, he seems comfortable in his skin, and they’ve done a really nice job of letting him be himself and play free. I’m happy to see it because the talent was always there, and he’s a great kid.”

After Rahne left for the ODU head job, Kirk Ciarrocca came aboard as Penn State’s offensive coordinator in 2020, and nothing changed for Levis. Most of his playing time came situationally as a runner from the quarterback position.

Levis had personally informed Penn State coach James Franklin that he planned to transfer, and Levis’ parents, Mike and Beth — who were both athletes in college — met with Franklin to thank him for what he and the Penn State program had done for their son. But similar to the early stages of Levis’ high school recruitment, schools weren’t lining up for his services out of the transfer portal. Levis said he heard from Rutgers, UConn, UMass and several other smaller schools.

“Nobody had seen me throw it. All they’d seen me do is run,” he explained.

But Kentucky was looking for a quarterback, and Stoops had just hired Coen as his offensive coordinator. Coen was the assistant quarterbacks coach with the Rams, but he had seen Levis play in high school when Coen was coaching at UMass and then Maine and was recruiting in the New England area.

Even with that familiarity, Stoops said they had to dig through Levis’ tape at Penn State to find plays where he was making different throws.

“We knew we had to go get him, but because of the way he was utilized at Penn State, you really had to search for certain throws,” Stoops recounted. “There was the Nebraska game from the year before, throws we watched and saw and confirmed what we thought. It also helped that Liam knew him from high school.”

Levis didn’t graduate from Penn State until May 2021, so he didn’t have the benefit of going through spring practice his first year at Kentucky.

“Will bet on himself. He took a gamble and took a chance, and it’s worked out extremely well,” Mike Levis said. “He had to walk into that locker room and gain the respect and trust of his teammates and coaching staff in a relatively short time.”

Levis made an immediate impression. He was named one of eight team captains and helped lead Kentucky to 10 wins for only the fourth time in school history. Prospering in Coen’s pro-style system, Levis gave the Wildcats a dimension at quarterback they hadn’t previously had under Stoops and finished with 3,202 yards in total offense with 24 passing touchdowns and nine rushing touchdowns. He also threw 13 interceptions.

“A lot of times with the interceptions, it was trying to do too much, trying to fit it into a window I didn’t need to try and fit it in,” said Levis, who has thrown 10 touchdown passes with four interceptions through four games this season.

Levis has also taken a ton of hits and has been sacked 16 times. He has two rushing touchdowns, but has been limited to minus-37 rushing yards. That’s after finishing with 376 rushing yards a year ago.

“They’ve had trouble protecting him and haven’t been able to run the ball, and that’s hurt him,” one NFL scout told ESPN. “But he’s still found ways to spread the ball around. Look at the explosive plays he’s made.”

Levis is tied for second nationally with seven passes of 40 or more yards, and freshman receivers Dane Key and Barion Brown are starting to come on, along with Virginia Tech transfer Tayvion Robinson.

Also, senior running back Chris Rodriguez Jr. is set to return against Ole Miss after missing the first four games this season. He has rushed for 2,740 yards and 26 touchdowns in his career and should help balance out the Wildcats’ offense.

One of the adjustments Scangarello made with Levis this offseason was changing his footwork in the shotgun to receive the snap with his left foot forward instead of his right foot forward. Burrow made a similar adjustment when he was at LSU, Scangarello said, not to mention Matt Ryan when he was with the Atlanta Falcons.

Will Levis airs it out for 70-yard touchdown

Before Scangarello took the Kentucky job this offseason, he did a video call with Levis to talk to him about those plans and make sure he was onboard.

“It’s what I know and what I teach, and Will is so quick to pick up on every adjustment we make. He’s so precise in everything he does,” Scangarello said. “He does things that I haven’t seen many guys do. He has the best of Jimmy Garoppolo‘s ability from 15 yards in, which Jimmy is one of the best on the planet with the short, accurate, quick-twitch throws. Will can do all that, but he can also throw the ball 65 yards on a dime.”

Multiple scouts told ESPN they still want to see Levis be more consistent with the “touch and finesse throws” and not be so confident in his arm strength that he’s trying to force throws when he could check down a pass to a running back. Scangarello has also reminded Levis repeatedly not to take unnecessary hits.

“He’s gotten better at some of the layups and will keep getting better,” Stoops said. “The dude is just so amped in everything he does, in class, on the football field, in meetings. But as he plays and gets more reps, you just see that much more poise.”

TIM COUCH, KENTUCKY’S record-setting quarterback from 1996 to 1998 and the No. 1 overall pick in the 1999 NFL draft, sees somebody who is committed to his team and to getting better every time he steps onto the field. Couch spent some time with Levis this summer. They played golf together and still talk periodically.

“He’s like an old-school player out there,” Couch said. “We’ve struggled to protect him at times this year and I’ve seen him take some big hits, but he pops right back up, stands in there and slings it. He’s got a Brett Favre-type of feel to him, a gunslinger who’s not afraid to throw his body around and sacrifice for the team. He’s fun to watch.”

When it comes to arm strength, combined with the ability to get the ball out quickly and do so without much room to throw, Couch thinks Levis is in a class by himself.

“I watched him up close this summer, and you just don’t see that kind of accuracy and velocity,” said Couch, who set 14 SEC records and 26 school records. “If there’s a stronger arm in college football, I want to see it. He’s going to blow the scouts away. He’s athletic, tough, a great leader and has all the intangibles you look for in a quarterback.”

Kentucky’s toughest tests of the season remain. After the visit to Ole Miss this weekend, there are dates with top-10 teams Tennessee on the road Oct. 29 and defending national champion Georgia at home Nov. 19.

Those are big stages for the Wildcats and big stages for Levis, whose steely focus has remained firmly on what’s right in front of him and not what lies ahead.

“I’m not going to cheat my teammates or myself,” Levis said. “This season is what matters and helping bring Kentucky to new heights, a team that fans will remember forever.”

In the world of name, image and likeness, Levis has cashed in handsomely. He has deals with steakhouses, automobile dealerships, golf courses and has even been paired with a horse (War of Will) to promote Claiborne Farm’s breeding operation. He’s also helped with relief efforts in eastern Kentucky after flooding ravaged that area this summer and participated in a telethon last year to help raise money for those impacted by tornadoes that hit parts of western Kentucky.

“I’ve never been around somebody so driven to do everything the right way,” said Guyon, Levis’ high school coach. “He’s one of those people in life who succeeds because he knows what he needs to do, how he needs to do it and when he needs to do it.”

And yet, Levis remains fueled by those who doubt him. This summer, he was talking to a Pac-12 assistant coach who told him there was early interest in bringing him in as a transfer from Penn State.

“They were looking for a quarterback,” Levis said. “I won’t say which school it was, but they were like, ‘Nah, that kid can’t play.’ My reaction was, ‘Man, that’s awesome,’ because I couldn’t wait to get out and prove them and everybody else wrong.”

The spotlight will only get brighter for Levis, especially as the games get bigger. And as the NFL draft approaches, there will inevitably be another round of doubters.

He wouldn’t have it any other way.

Kentucky competing for an SEC football title? An under-recruited former Penn State backup going No. 1 in the draft?

It sounds hard to believe, but for the kid who did an eighth-grade solo of Hall & Oates’ ‘You Make My Dreams Come True,’ it all makes sense.

That is, to everybody but Levis.