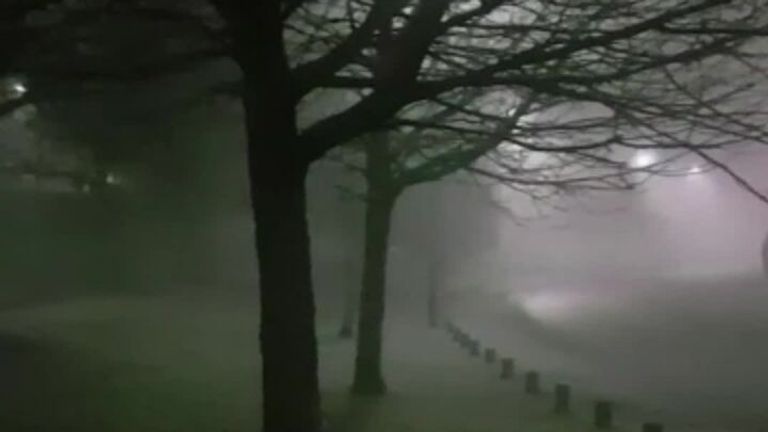 Parts of southern England will see lows of -9C this morning, forecasters are warning – as the UK experiences an unusual divide in the weather.

Some places could see freezing fog this morning – and the UK Health Security Agency has now extended a level three cold weather alert until 9am on Friday.

Temperatures hit lows of -9.8C in the West Suffolk village of Santon Downham on Monday – East Anglia’s coldest night in 10 years – but not everywhere is shivering through January.

Check the weather forecast where you are

A change in wind direction means it is pretty mild in Scotland, and temperatures could reach 12C or 13C (53.6F to 55.4F) in Aberdeenshire later today.

Met Office forecaster Craig Snell said: “Further south across the rest of England and Wales we’re still under the colder conditions, so there could be some fog again which will be quite slow to clear, so a very similar start to Monday.

“When there is cloud it’s going to feel pretty cold, but in the sunshine, although it will be cold, the sun will help negate the cold a little bit, so all in all a pretty similar day to Monday.”

While the current Arctic blast will give way to warmer air from the Atlantic, it will take longer to reach the South – and the rest of the week is set to turn a little damp.

“Going into Wednesday we do see a change as the day goes on, we’ve got a cold front coming down from the North so that will move across Scotland and Northern Ireland during the morning and then gradually move across England and Wales during the afternoon,” Mr Snell added.

“There will be some rain with it, turning brighter after it moves in, and the front will then pass on Thursday.”

The UKHSA’s cold weather alert means people are being urged to keep warm and check in on family and friends who may be vulnerable.

Vulnerable people in areas where average temperatures are recorded as – or forecast to be – below 0C for seven consecutive days are now eligible to receive cold weather payments to help with heating bills.

The government says payments will be made to homes across North East England, Cumbria, west Wales and Oxfordshire.

The Environment Agency currently has 34 flood warnings in place across England, meaning flooding is expected and action to prevent it should take place.

And in London, Mayor Sadiq Khan has issued a high air pollution alert – with commuters urged to avoid making unnecessary car journeys and use public transport or cycle if possible.

Advice for road users when travelling in freezing fog

• Use fog lights, but remember to turn them off when the visibility improves

• Don’t hang on the lights of the car in front. Rear lights can give a false sense of security

• Watch out for freezing fog which is made of water droplets that freeze on contact with objects such as the pavement, road, car, etc. It can quickly form a layer of ice