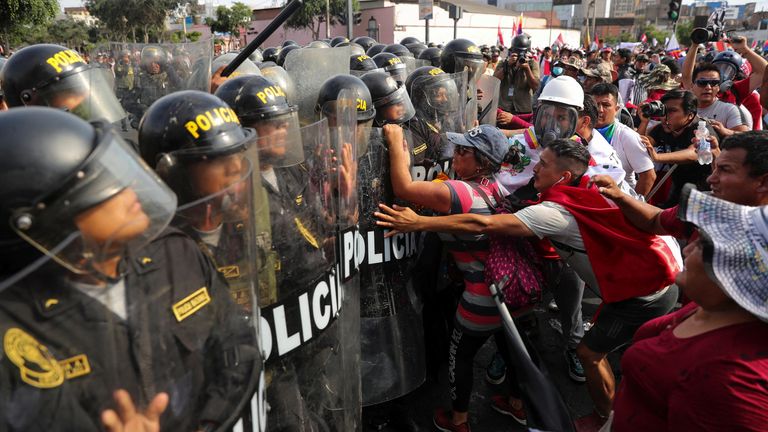 Thousands of protesters descended on Peru’s capital and clashed with police as they demanded President Dina Boluarte leave office.

The South American country has seen its worst political violence for more than two decades, with 55 people killed in unrest since the country’s first president from a rural Andean background was removed from office last month.

The protests have highlighted the deep divisions between the country’s urban elite, largely concentrated in the capital Lima, and the mostly indigenous south.

Police estimated around 3,500 people attended the march, but others speculated the crowd was twice as large.

Some threw rocks at the police, who fired volleys of tear gas in response, and a major fire broke out at a building near the historic Plaza San Martin. The building was empty when the massive blaze ignited from unknown causes, a firefighter commander told local radio.

“This has not been a protest; this has been a sabotage of the rule of law,” Prime Minister Alberto Otarola said alongside President Boluarte and other government ministers.

Ms Boularte criticised the protesters for “not having any kind of social agenda that the country needs” and accused them of “wanting to break the rule of law”.

Former president Pedro Castillo has been in detention and is expected to be tried for rebellion since he was impeached after a failed attempt to dissolve Congress.

Last week Ms Boluarte’s government extended a state of emergency in Lima and the southern regions of Puno and Cusco, which curtails some civil rights.

She has asked for “forgiveness” for the deaths of the protesters but has dismissed calls to resign.

Human rights groups have accused the police and army of using deadly firearms on protesters, but the police say the demonstrators have used weapons and homemade explosives.