Labour has called on Rishi Sunak to dismiss Nadhim Zahawi from his cabinet after questions over the Tory chairman’s tax affairs remain unanswered.

The paper alleged there were questions over his use of an offshore company – a Gibraltar-registered family trust called Balshore Investments – to hold shares in the polling firm YouGov.

Mr Zahawi has previously denied he was a beneficiary of Balshore Investments.

Politics live: Teachers’ unions and government meeting as thousands set to walk out on strike next month

HMRC is facing pressure to reveal whether Mr Zahawi paid a penalty to the tax office and Labour has written to the government department arguing the “public requires answers” over the matter.

After the Guardian newspaper earlier on Friday reiterated the allegation that Mr Zahawi agreed to pay a penalty to HMRC as part of a seven-figure settlement, Labour’s deputy leader Angela Rayner has called for him to be “dismissed”.

“Rishi Sunak promised a government of integrity, professionalism, and accountability but instead he’s propping up a motley crew of scandal-ridden ministers,” she said in a statement.

“The position of the man who was until recently in charge of the UK’s tax system and who this prime minister appointed Conservative Party Chair is now untenable.

“It’s time for Rishi Sunak to put his money where his mouth is and dismiss Nadhim Zahawi from his cabinet.”

“So if his Party Chair Nadhim Zahawi is not being clear to either HMRC or the British public, then he has no place in government.

“The public are fed up with the stench of Conservative sleaze.”

Mr Zahawi was seen going into Number 10 Downing Street on Friday and did not respond when asked by Sky News political correspondent Rob Powell if he had been honest about his tax affairs.

Sky News has made a number of approaches to the Tory MP and his team to clarify the situation around the payment to HMRC, but he has still not revealed if the report is accurate.

Instead, we received a broader comment from the MP’s spokesperson, who said his tax affairs “were and are fully up to date and are paid in the UK”, adding: “He has always said that he will answer any questions from HMRC as he always has done.”

HMRC has said it does not comment on individual cases, but Labour deputy leader Ms Rayner said “given the public interest” in the case “the public requires answers”.

She claimed: “In particular, there appears to be an element of special treatment directed towards Nadhim Zahawi by HMRC.”

The allegations centre on his links to a Gibraltar-based trust ‘Balshore Investments Limited’, of which his father Hareth Zahawi is a director.

Nadhim Zahawi has said that neither he nor his wife benefit from this trust.

However, when he founded the polling firm YouGov in May 2000, the trust was allocated shares in the company equalling the number given to Mr Zahawi’s co-founder Stephan Shakespeare.

After digging through pages of documents, the accountant and tax campaigner Dan Neidle has suggested there would have been a tax saving of several million pounds when these shares were sold because they were held by an offshore trust.

It’s this figure the Guardian is suggesting is at the centre of the reported repayment to HMRC.

Nadhim Zahawi’s responses to these stories have always been very specific and carefully worded.

After these latest accusations, a spokesperson for the Tory chairman said he “does not recognise these numbers” and has “never sought legal advice for dealing with HMRC”.

They also insisted Mr Zahawi’s taxes were up to date and fully paid in the UK.

Sources have briefed that Dan Neidle – who is a Labour member – is a “labour activist” and the allegations are merely taken from his “blog”.

One of Mr Zahawi’s more outspoken interventions came during the Number 10 leadership race in July last year though, when he said he was the victim of a “smear” over his financial affairs

That statement puts the cabinet minister in a difficult spot if concrete evidence emerges that he has repaid money to HMRC and potentially even been issued with a penalty.

The timing of any investigation or settlement could be important as well, given Mr Zahawi was briefly chancellor last year.

Ms Rayner called on HMRC to explain the nature of the payment and whether the former chancellor “has admitted fault or incurred financial penalties as part of his settlement”.

A spokesman for Mr Zahawi has said his taxes are “properly declared” and he “has never had to instruct any lawyers to deal with HMRC on his behalf”.

“As we have repeatedly said, Nadhim’s taxes are up to date and are fully paid in the UK. Mr Zahawi does not recognise these numbers and he has never sought legal advice for dealing with HMRC,” the spokesman said. 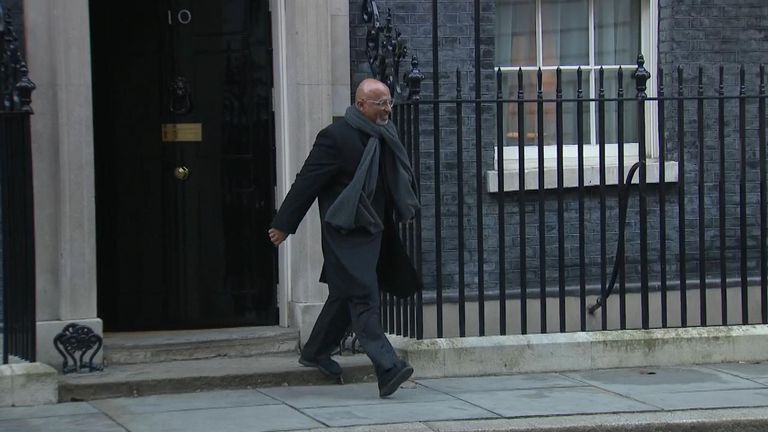 Zahawi asked if he settled with HMRC

PM ‘has full confidence’ in Zahawi

Mr Sunak defended his colleague at Prime Minister’s Questions (PMQs) on Wednesday, saying Mr Zahawi “has already addressed this matter in full and there’s nothing more that I can add”.

Downing Street was pressed for more information during a press briefing on Friday.

Asked if any concerns had been raised about Mr Zahawi’s taxes before Mr Sunak made him party chair, the prime minister’s official spokesman said he was not aware of any “specific” conversations.

Before entering politics, Mr Zahawi co-founded YouGov and is thought to have a net worth of around £100m.

Questions over his tax affairs have been raised before – namely ahead of his short tenure as chancellor in the closing days of Boris Johnson’s premiership.

The Observer claimed civil servants in the Cabinet Office’s propriety and ethics team alerted the prime minister to an HMRC “flag” over Mr Zahawi before his appointment, but Mr Johnson went ahead “despite the possible concerns over his tax affairs”.

The minister claimed he was “clearly being smeared” in his campaign to become Conservative Party leader, telling Sky News he had “always” paid his taxes and had “declared” them in the UK.