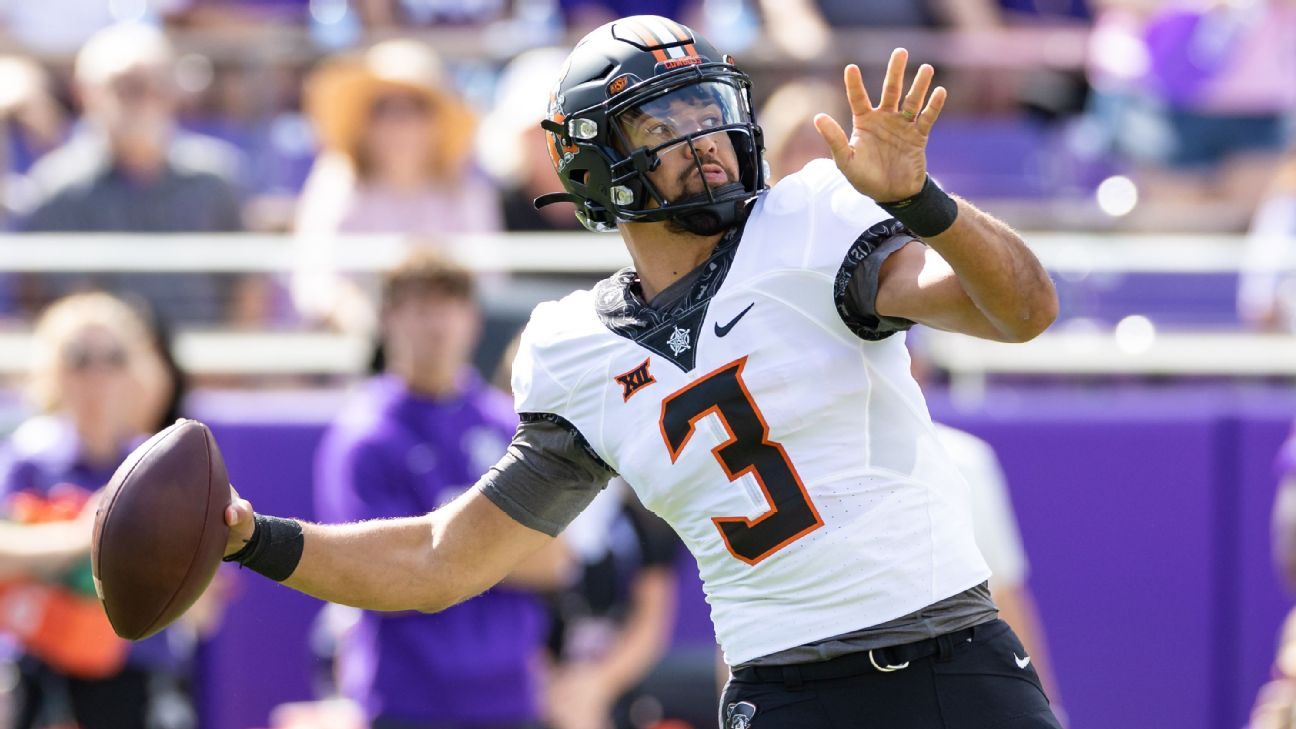 “I fit in very well there with what they do on offense, their play-action game, the way they take deep shots down the field, Coach Kiffin’s mindset and their balance with a great running back like Quinshon Judkins,” Sanders said. “It’s just a very well-rounded scheme.”

Sanders is the second heralded quarterback in a week to join Ole Miss. Walker Howard, a former five-star recruit, announced Wednesday that he was transferring from LSU to Ole Miss. Jaxson Dart, who transferred last season to Ole Miss from USC, is the Rebels’ returning starter at quarterback after throwing for 2,974 yards, 20 touchdowns and 11 interceptions in 2022.

“There’s always going to be somebody you’re competing against, whether it’s at this level or the next,” said Sanders, a four-year starter who accounted for 85 career touchdowns at Oklahoma State. “It just helps all of us — the competition — and I’m going to be the oldest one and will do the best I can to help those guys, even after I leave.”

The staff did not add a high school quarterback in the 2022 and 2023 class, so Kiffin is relying on the transfer market to help build his quarterback room and now has a few options.

Sanders was one of the most coveted quarterbacks available in the portal. Other schools to show serious interest included Auburn, UCLA, Baylor, BYU, Kentucky and Virginia Tech, he said. He also emphasized that there was no ill will toward Oklahoma State.

“I’m excited to take my shot in a league [SEC] that’s in a different category, and I’m ready to see what that’s all about,” Sanders said. “I’ve had three different offensive coordinators, so it’s not like I’m opposed to playing under new people or new schemes. It’s no disrespect to Oklahoma State, either. They raised me to be the quarterback I am right now, and I’m thankful for that. It was just time to move on and try something new.”

In the new world of the transfer portal, being able to keep great players is just as important as getting them. Judkins, who led the SEC with 1,565 rushing yards last season as a freshman, could have easily tested the waters in the portal, but stayed put.

“You want to play with great players,” Sanders said. “It’s pretty obvious they’ve been able to build their roster and keep their most talented guys.”

Sanders, who was 31-12 as a starter at Oklahoma State, said he separated the AC joint in his throwing shoulder a month into the 2022 season and that he was never completely healthy after the injury. He said he re-injured his shoulder against Kansas State and missed three of Oklahoma State’s final five games. The Cowboys went 1-4 during that stretch.

“It was definitely the most painful season I’ve gone through,” Sanders said. “There were times I thought it was healing and then I’d get hurt and it would be back to square one again. I did the best I could to play through the pain.”

Sanders’ best season came in 2021 when he was named first-team All-Big 12 and led the conference with 3,507 total yards (2,839 passing and 668 rushing). His multipurpose skills particularly appealed to Kiffin, who uses his quarterback frequently in the running game. Sanders has 18 career rushing touchdowns, but he has also thrown 40 career interceptions.

Having seen other versatile quarterbacks move on to different places and have success (USC’s Caleb Williams, Oregon’s Bo Nix and LSU’s Jayden Daniels to name a few), Sanders said he’s excited about the possibilities in Kiffin’s up-tempo, high-octane scheme.

“I’ve been looking at their playbook, and the more I look at it, the more I like the leeway they give their athletes to go make plays,” Sanders said.

Deion lands No. 1 CB as McClain flips to Colorado
MLB Power Rankings: Who’s No. 1 on our midwinter list?