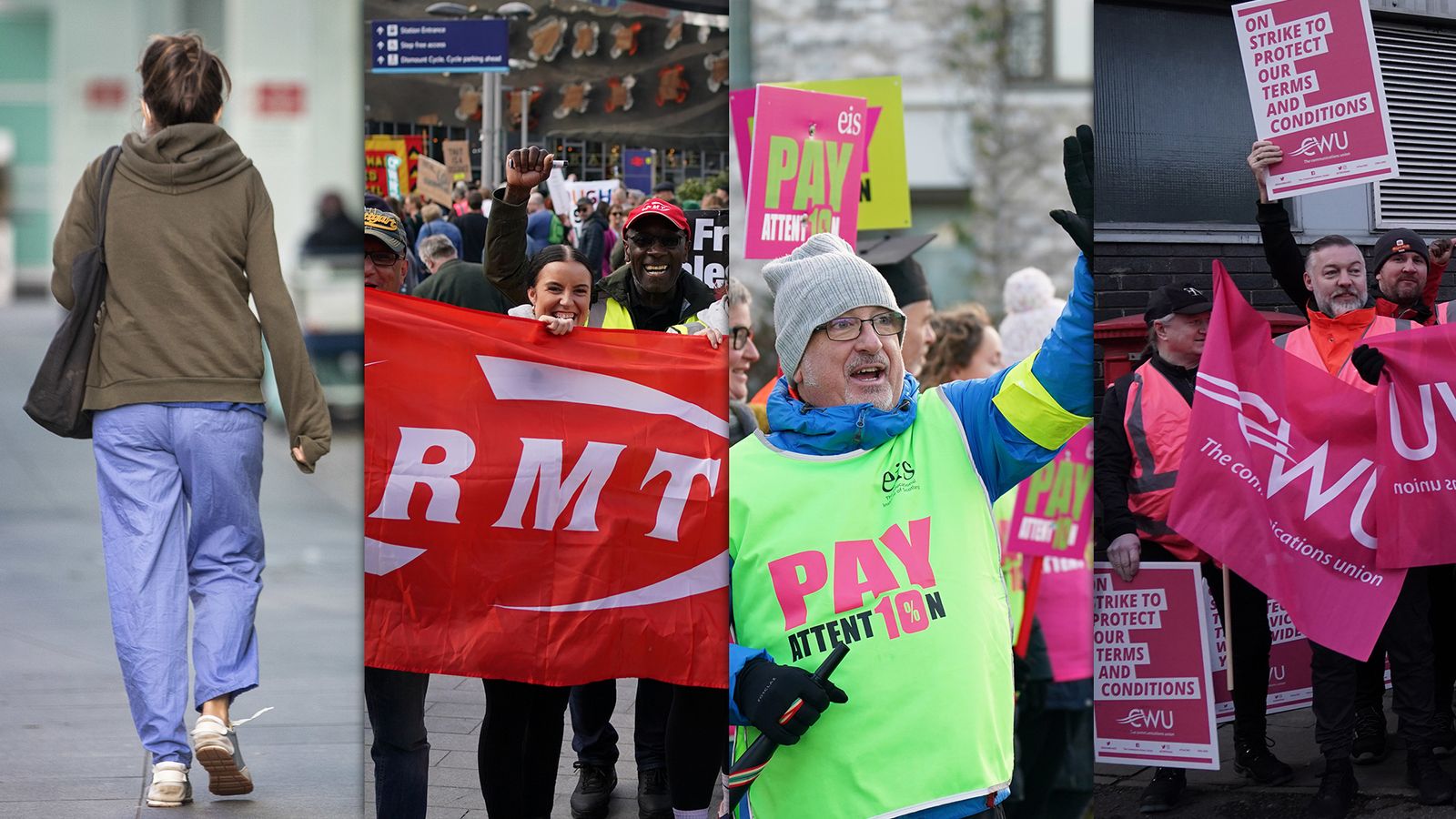 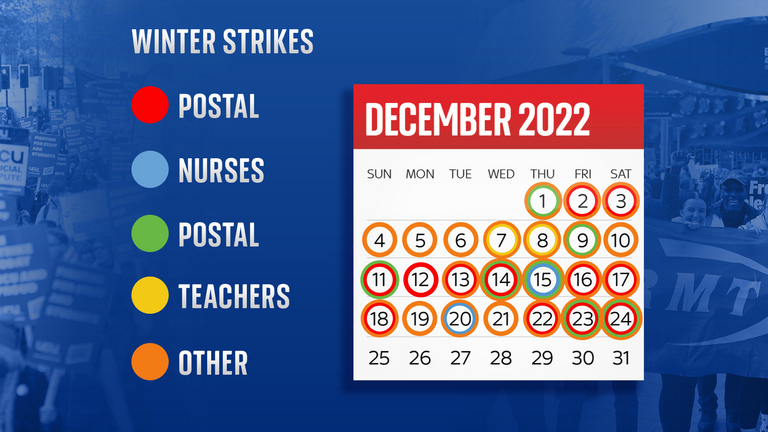 The UK is facing a wave of strikes this winter, with at least one walkout a day ahead of Christmas, as workers from different industries seek better pay.

From transport to the NHS, education to delivery drivers, tens of thousands of people from various industries are expected to take industrial action as recession grips the UK and the cost of living rises.

Sky News looks at the industries that are striking and why.

An overtime ban from 18 December until 2 January by RMT members will also affect many train services.

The Rail, Maritime and Transport Workers (RMT) union represents Network Rail workers, who operate railway infrastructure such as signals, and workers at 14 of the UK’s 28 train companies.

RMT general secretary Mick Lynch is arguably the most well-known union official and said his members are striking in response to the government cutting jobs and refusing to increase pay in line with inflation.

He also said the government wants to make changes to the Railway Pension Scheme by reducing benefits and making staff work for longer while paying increased contributions so they will have less money in their pension pots. 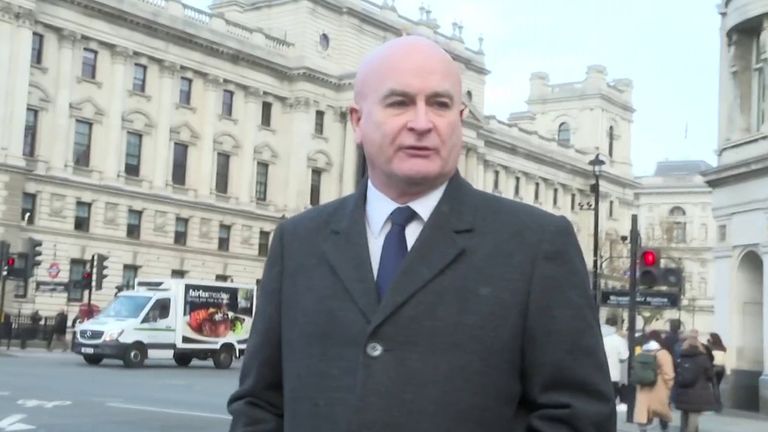 Mr Lynch said the government plans to “attack” terms, conditions and working practices by using “fire and re-hire” and cut real-terms pay for most members through lengthy pay freezes and below RPI inflation pay rises.

The RMT wants a pay rise, which it has not put a figure on, and reassurance jobs will not be cut, as well as working practices and conditions protected.

RMT members who are security staff on the Eurostar, some who earn £10.66 an hour, will walk out after refusing a below-inflation pay offer.

Aslef, which represents train drivers at 12 companies, is also striking, with its members wanting a “proper” pay rise to help with the increased cost of living as they say they have not had a pay increase since 2019.

The union said a number of train companies “have their hands tied” by the Department for Transport so are unable to negotiate a “reasonable deal”, which is why they are striking.

GMB strikes in Sunderland will take place on 23-24 December and 26-27 December.

The union has said Abellio has failed to enter into “meaningful pay talks” about salary increases due for January 2023 and says its members are among the lowest paid in London.

It said Metroline’s offer of a 10% pay increase amounted to a real terms pay cut due to high inflation.

GMB members who work as bus drivers for Stagecoach in Sunderland are striking over “real-term pay cuts” as they say the company is refusing to negotiate.

Stagecoach North East disputes this and says an offer has been made that would make those drivers “amongst the highest paid of any bus drivers in the region”.

Staggered strikes between 16 December and 7 January

National Highways employees, who plan, design, build, operate and maintain the country’s roads, will take part in a series of “staggered” strikes in England.

Their union, PCS, says the action risks bringing the road network to a standstill and that the walkouts will coincide with the planned strikes by RMT members on the railways.

Their dispute is over pay, pensions, job security and redundancy terms.

Ground handlers employed by Menzies at Heathrow airport are due to strike ahead of Christmas in a continuing pay row.

Members of the Communication Workers Union (CWU) are walking out in November and December in a long-running dispute over pay and Royal Mail’s modernisation plans, which include 6,000 redundancies and delivering parcels on Sundays, with no letters on Saturdays.

The strikes are going ahead after Royal Mail said it had delivered a “best and final” offer to the union, including a number of “extensive improvements”.

Royal Mail has said it offered workers a pay rise of up to 9% over 18 months, a new profit share scheme for employees and more generous voluntary redundancy terms.

However, the CWU said Royal Mail’s offer would turn the company into a “gig economy-style parcel courier, reliant on casual labour”. 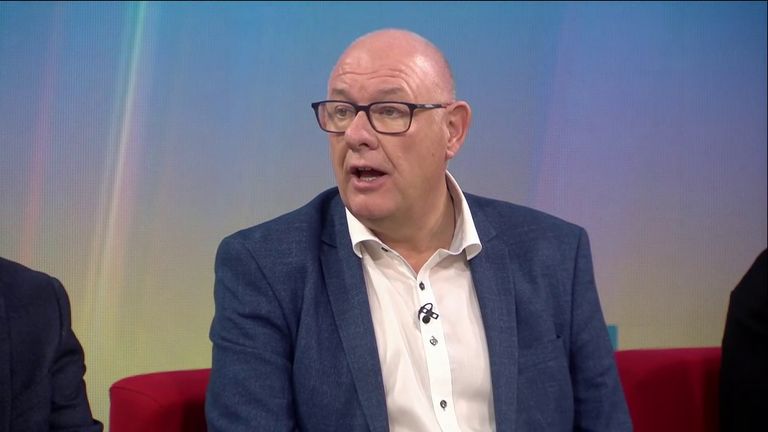 ‘We don’t want businesses to suffer’

Read more:
Will I still get my letters and parcels?

Strikes take place on 15 and 20 December in England, Wales and Northern Ireland.

Members of the Royal College of Nursing are set to strike in December for the first time ever following the government failing to commit to formal pay negotiations after a five-day deadline ended in November.

Thousands of NHS nurses will strike as they call for a rise of 5% above inflation as they said they have had a real terms pay cut of 20% since 2010.

They are also calling for better working conditions as nursing vacancies are at a record high so staff are stretched and regularly working beyond their shifts without extra pay.

The strikes will result in thousands of cancelled NHS operations and appointments.

Junior doctors – any doctor below consultant level – who are BMA members will be balloted to strike on 9 January 2023.

They say they have had a real terms pay cut of 26.1% since 2008, while their work has increased and morale is plummeting after working through the pandemic with “only valueless claps”.

Junior doctors were guaranteed a 2% pay rise in 2022/23 but that was agreed before the pandemic when inflation was below 2% so the BMA has said it is actually a pay cut.

They were also excluded from the 4.5% increase the rest of the NHS has been promised. A potential strike date has not been set.

Five other unions are balloting for strike action, which could be co-ordinated, by NHS staff who are not junior doctors or nurses, including ambulance staff, midwives, physios and hospital porters.

Chartered Society of Physiotherapy members in Scotland have voted to strike in the next six months but will consider an offer from the Scottish government of a salary rise of 7%, or 11% for the lowest paid.

Physios in England and Wales are being balloted until 12 December as the union calls for pay rises in line with inflation.

The Royal College of Midwives is balloting its members, who are midwives and maternity support workers, for industrial action after it rejected the government’s 4% pay rise offer as it is below inflation.

Unite, the UK’s second biggest union, is also balloting 10,000 NHS members ahead of Christmas for strikes in early 2023.

Ambulance workers who are Unite members across Scotland, England and Wales have already voted to carry out a work-to-rule and overtime ban after rejecting the NHS’s pay offer of a 4% pay increase. Dates are yet to be set.

Unison, the UK’s largest union, is balloting 350,000 NHS employees across England, Wales and Northern Ireland as it has rejected the government’s 4% pay rise offer.

The union represents a wide range of NHS staff, including porters, nurses, paramedics and cleaners.

Thousands of Unison workers who are ambulance workers in the North East, North West, London, Yorkshire and the South West have voted to strike but dates have not been set and exact areas not yet confirmed as the vote was just below the 50% threshold for many NHS trusts.

Unison has suspended its ballot in Scotland as they consult on the Scottish government’s offer of a flat rate of just over £2,200, which is worth more than 11% to the lowest paid, after an initial offer of 5%.

Teachers in Scotland walked out on 24 November as they called for a 10% pay rise – which Scottish authorities say they cannot afford – and better working conditions.

Further walkouts are planned for 7 December.

University lecturers, librarians and researchers at 150 UK universities also went on strike on 24 and 30 November and 1 December in the biggest action of its kind in higher education – with more dates threatened.

The University and College Union said lecturers and other academic staff have suffered a decade of below-inflation pay rises, with a 3% increase announced in the summer.

It is demanding a pay rise in recognition of the cost of living crisis, an end to insecure contracts and wants employers to reverse pensions cuts imposed this year that it claims will lead to the average member losing about 35% of their future retirement income.

Driving examiners will go on strike on a rolling regional basis starting in Scotland and the North from 13-18 December.

Around 100,000 civil service members of the Public and Commercial Services Union (PCS) will begin a month of strikes from mid-December as they call for a 10% pay rise, better pension conditions, job security and to scrap planned redundancy reforms.

The government has said they “greatly value” civil servants’ work but their demands would cost £2.4bn, which it said is “unaffordable” at the moment.

Strike dates will be announced for the Christmas period.

Almost 400 GMB members who work for Bestfood and deliver food to chain restaurants such as KFC, Burger King, Pizza Hut, Zizzi, Pizza Express and Wagamama have voted to strike.

GMB said Bestfood’s parent companies – Booker and Tesco – are “making serious money while the people who do the graft are struggling to make ends meet”.

The union said it wants a pay deal to protect drivers from the cost of living crisis.

Anyone who likes Haywards Pickled Onions over the festive season should take note of a factory strike.

The Mizkan Euro factory in Rochdale has already seen 20 days of lost output as a result of a pay dispute.

The strike will last five days from 5 December.

Unite members at brewers Greene King will go on strike at its sites in Bury St Edmunds, Eastwood in Nottinghamshire and Abingdon in Oxfordshire after they were offered a 3% pay rise and a one-off payment of £650.

Workers, who brew and distribute beer such as the brewery’s IPA, Old Speckled hen and Abbot Ale, said the offer was a substantial real-terms wage cut because of inflation, but the brewer said it was a fair pay rise.