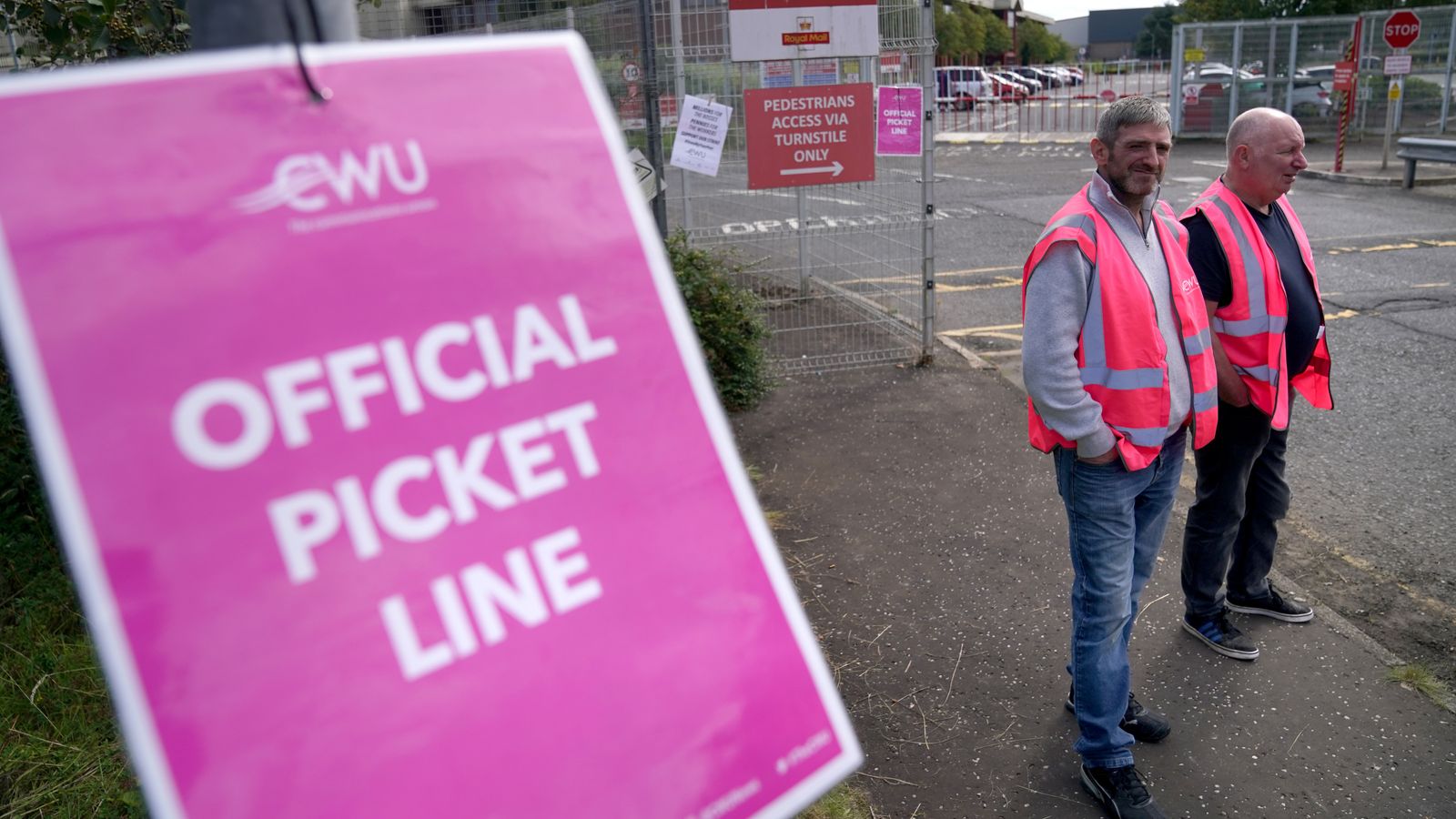 The strike action is being taken nationwide by 115,000 staff who are represented by the Communication Workers Union (CWU).

It is the latest stoppage in a long-running, and increasingly bitter, dispute over pay and the company’s modernisation plans.

The walkouts are deliberately timed to coincide with the core pre-Christmas shopping season – a crucial earnings generator for Royal Mail – as strikes will also hit 30 November and 1 December, affecting Cyber Monday deliveries.

Retail intelligence firm Springboard has forecast a busy few days ahead as cash-strapped shoppers look to bag some bargains in the midst of the cost of living crisis.

Fears of disrupted deliveries could force more bargain hunters towards stores rather than online shops.

The eBay marketplace said a survey of its small business members showed that half saw the impact of the Royal Mail walkout as “disastrous” for demand.

eBay’s UK general manager, Murray Lambell, warned: “The UK boasts one of the world’s most sophisticated ecommerce economies, with small businesses thriving by scaling up their retail operations online.

“But industrial action risks creating chaos at the worst time for businesses and families.

“Astronomical energy prices, rising interest rates, and the blowback from political unrest has made it incredibly challenging for small businesses to operate right now.

“Adding industrial action, which is causing widespread disruption to deliveries and sales, at the most important time of year for trading, risks being the nail in the coffin for many small businesses.”

Michelle Ovens, founder of Small Business Britain, said: “Small businesses are under incredible pressure right now, with every area of business under strain and cash-flow a huge problem.

“The widespread disruption caused by postal strikes will jeopardise a core sales channel for many small businesses during the critical peak period, when every sale counts.

“We need to be doing all we can to support these businesses to recover and grow, and minimise obstacles where possible, not place them under further duress.”

Government ‘not in a position to give inflation pay rises’
Civil servants to go on strike – affecting ports, borders and transport

On the bigger picture, Andrew Opie, director of food and sustainability at the British Retail Consortium, said: “Retailers will be working closely with their delivery providers on contingency plans to ensure customers can get the goods they need, especially on Black Friday and the run up to Christmas which is so important to consumers and retail businesses during this very difficult year.”

The CWU argues that Royal Mail’s proposals mean it is fighting for the very survival of the company as we know it.

It claims the terms on offer would turn Royal Mail into a “gig economy-style parcel courier, reliant on casual labour”.

Royal Mail says it must modernise to survive.

It has sought to be excused its requirement for letter deliveries on Saturdays and wants to be able to deliver more profitable parcels seven days a week.

It says the strikes to date have cost it £100m.

Royal Mail’s parent firm IDS says that without a deal, it could carve the UK operation from IDS and has threatened thousands of job losses on top of 6,000 already out for consultation.

The union conducted a vote of no confidence in Royal Mail chief executive Simon Thompson this week.

He said of the company’s offer on Wednesday: “Talks have lasted for seven months and we have made numerous improvements and two pay offers, which would now see up to a 9% pay increase over 18 months alongside a host of other enhancements. This is our best and final offer.

“Negotiations involve give and take, but it appears that the CWU’s approach is to just take. We want to reach a deal, but time is running out for the CWU to change their position and avoid further damaging strike action tomorrow.”

CWU general secretary Dave Ward responded: “We are disappointed that instead of reaching a compromise to avoid major disruption, Royal Mail have chosen to pursue such an aggressive strategy.

“We will not accept that 115,000 Royal Mail workers – the people who kept us connected during the pandemic, and made millions in profit for bosses and shareholders – take such a devastating blow to their livelihoods.

“We urge every member of the public to stand with their postie, and back them like never before.”

Ofgem’s energy price cap rises to record sum – which would have been your bill without government help
Wages keep up with inflation in just one industry, ONS figures show