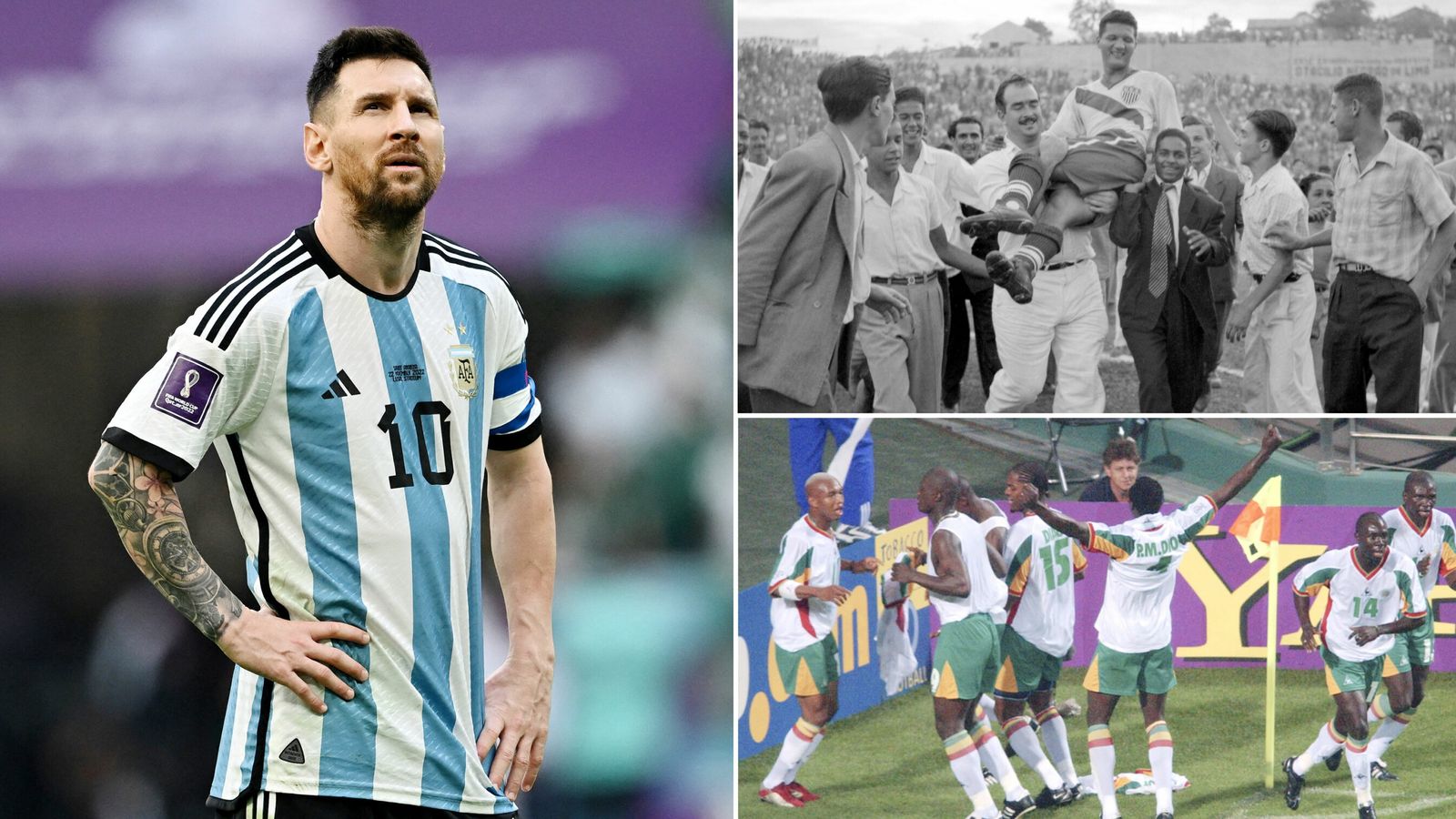 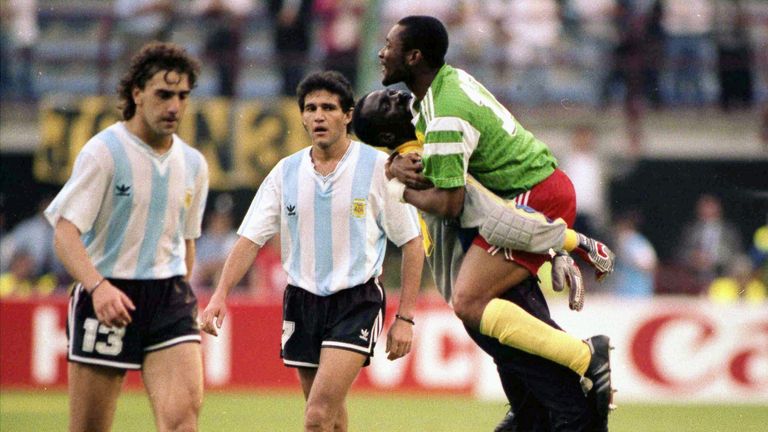 Argentina have become the latest side to suffer a shock World Cup defeat – but how does it compare to some of the previous jaw-dropping losses?

Football fans watched in amazement as Lionel Messi’s side – one of the favourites to win this year’s tournament – were beaten 2-1 by Saudi Arabia on Tuesday morning.

It looked like it would be plain sailing for the South Americans when Messi scored a penalty to put his side 1-0 up.

But Saudi Arabia, who are 51st in the FIFA world rankings, fought back with goals from Saleh Al-Shehri and Salem Al-Dawsari to record a historic win.

Such is the extent of the excitement around today’s victory, that the country’s ruler King Salman has declared a national holiday across Saudi Arabia on Wednesday.

Here Sky News looks at some of the other big shocks in the history of football’s most prestigious tournament.

It is not the first time that Argentina have suffered a shock defeat at a World Cup.

Back at Italia 90, they were beaten 1-0 by Cameroon, in what is regarded to be one of the biggest World Cup upsets.

But they started in superb style, beating an Argentina side featuring Diego Maradona thanks to a second-half header from Francois Omam-Biyik.

Despite having two players sent off in the second half, Cameroon managed to hold on to secure a historic win.

They went on to beat Romania, before losing 4-0 to the Soviet Union to top the group.

They then beat Colombia in the second round, before losing in extra-time to England in the quarter-finals.

Having won the European Championships in 1980, West Germany were one of the favourites going into the 1982 World Cup in Spain.

They were expected to win their opening game comfortably against Algeria, who had made the World Cup finals for the first time.

West German coach Jupp Derwall tempted fate by saying that if his side didn’t beat Algeria “I’ll be on the next train home”.

He also said his players “would laugh their heads off if I showed them film of the Algerian team”.

Despite boasting a team packed with stars, West Germany were stunned 2-1 by the Algerians.

West Germany managed to bounce back quickly and battled through to the final, where they were beaten by tournament winners Italy.

While for England fans 1966 will evoke memories of World Cup victory, it is quite a different story for Italy.

That is because they were at the wrong end of one of the biggest World Cup upsets in history, losing 1-0 to North Korea at Ayresome Park in Middlesbrough.

The warning signs should have been there for Italy, with North Korea beating Australia 9-2 on aggregate across a two-leg playoff to make it to the World Cup finals.

Italy, meanwhile, were a team struggling for form, having been eliminated early in 1954, failing to qualify in 1958 and again being knocked out early in 1962.

After beating Chile 2-0, and then losing to the Soviet Union 1-0, they struggled early against North Korea, who scored the only goal of the game late in the second-half through Pak Doo-ik.

Italy were also on the end of another World Cup shock in 2002, when they faced co-hosts South Korea.

Featuring superstars including goalkeeper Gianluigi Buffon, legendary defender Paolo Maldini and a front line with Alessandro Del Piero and Francesco Totti, many had Italy as one of the favourites for the tournament.

But they were beaten 2-1 by South Korea during a thrilling round of 16 tie.

Christian Vieri gave Italy an early lead with a powerful header on 18 minutes.

But South Korea managed a late equaliser through Seol Ki Hyeon to push the game into extra-time.

With the game looking destined for penalties, Jung-Hwan Ahn scored a tap-in in the 117th minute to dump Italy out and send South Korea through.

The South Korea-Japan World Cup threw up a shock early on in the tournament when Senegal stunned defending champions France 1-0.

France featured a stellar squad, with the likes of Zinedine Zidane and Thierry Henry.

But an injury to Zidane early on appeared to disrupt France’s rhythm, while the then little-known but talented El Hadji Diouf took a starring role.

The forward, who would later move to Liverpool after impressing in the tournament, harassed the French defence throughout and forced a mistake which was capitalised on by the game’s only goalscorer, Papa Bouba Diop.

The tournament only got worse for France, who were dumped out at the group stage, while Senegal battled through to the quarter-final before suffering an extra-time defeat to Turkey.

Later turned into a film named ‘The Miracle Match’ due to the size of the upset, England’s defeat to the USA is regarded as one of the most shocking in World Cup history.

England, making their debut in the tournament, were heavy favourites against a US team consisting mostly of part-time players, among them a high school teacher and a dishwasher.

The Three Lions were known as the ‘Kings of Football’ at the time, with an impressive post-war record of 23 wins, four losses and three draws, including a 10-0 win against Portugal.

England’s star player Stanley Matthews was rested for the game, which US coach was so pessimistic about that he declared prior to the game: ‘We have no chance’.

But Haitian-born Joe Gaetjens scored the only goal in what would be a heroic 1-0 victory for the US.

The team was later profiled in a book named The Game of their Lives, which was later into a film of the same name – later named The Miracle Match.

Northern Ireland were out to prove a point in 1982 when they qualified for the first World Cup in 14 years.

But their job was made all the more difficult when they were drawn with the hosts, Spain, as well as Yugoslavia and Honduras.

After draws with the latter sides, Northern Ireland faced down a talented Spain side.

But they had to dig after Mal Danoghy saw red on 60 minutes, battling with a man down for the final 30 minutes to secure their historic win.

Both sides qualified for the second knock-out round, where they were dumped out after finishing bottom of their respective groups.