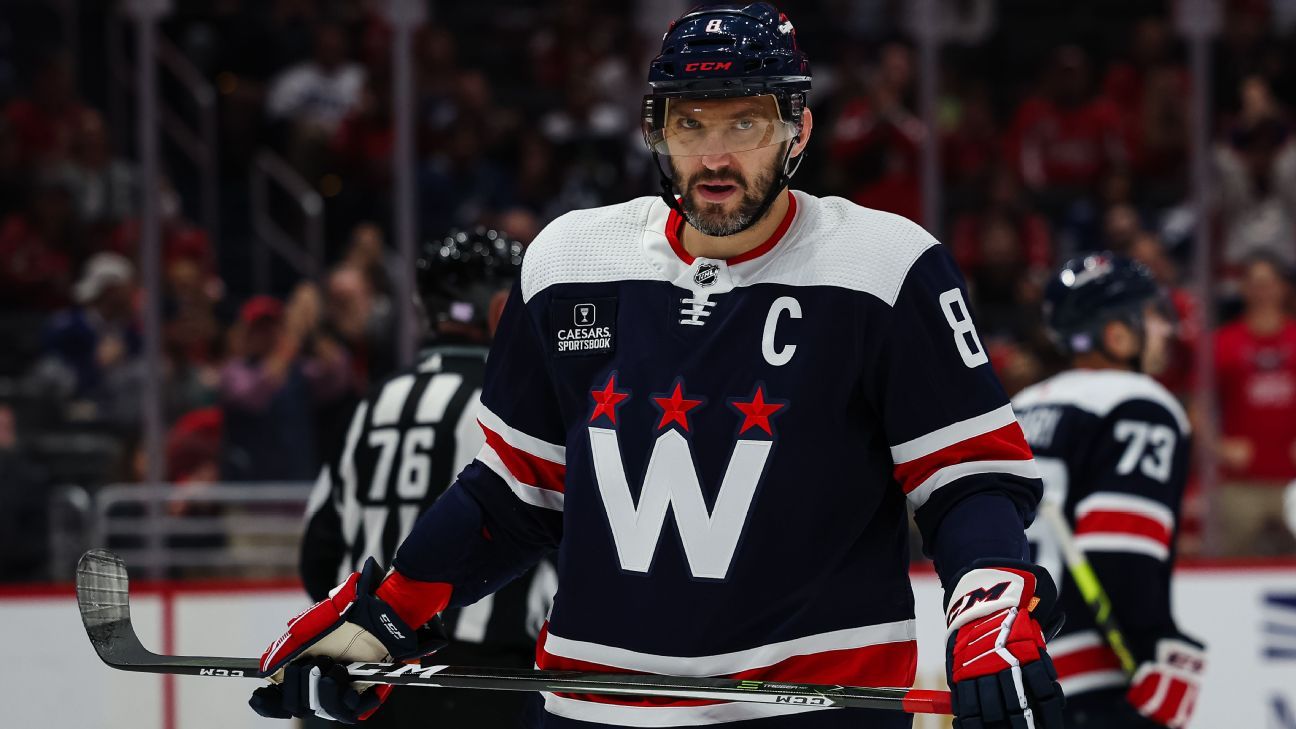 The course of an

Many of those still in the lineup — not named Alex Ovechkin — haven’t played to Washington’s usual standards. The Capitals’ calling card has long been their attack, and that’s a shadow of itself so far. Washington is 24th in shooting percentage (9.2%) and 26th in goals per game (2.75). Not one player had hit double-digital goal totals through Washington’s first 20 games.

The Capitals have also been a shell of themselves on the power play. Unless it’s Ovechkin rifling pucks home from his right-circle office, there hasn’t been much regular action on a man advantage ranked 24th in the league (18.9%). Washington’s lack of power-play goals starts with its frequent inability to get properly set up.

Meanwhile, their 15th-ranked penalty kill (78.3%) has been a blight, too, leaving goaltenders Darcy Kuemper and Charlie Lindgren hanging out to dry with the volume of high-danger chances allowed.

Washington’s defense hasn’t helped its netminders, either. The Capitals struggle in transition — especially against quicker opponents — and they’ve fallen to the league’s bottom half in goals and shots against.

Solutions: Overcoming the early-season injury issues will be critical. Backstrom has been practicing again recently. Wilson is skating. Oshie might be close. Getting each of them back will be a boost. But is that enough?

Washington has regular skaters failing to contribute. Evgeny Kuznetsov‘s two goals in 19 games? Surprising. Lars Eller with seven points in 20 games? Conor Sheary with 10? Washington desperately needs more contributions. Because once those recovered players return, the Capitals have to hit the ground running (if they can’t get rolling before that).

Ovechkin is chasing Wayne Gretzky’s all-time goal mark of 894. He’s got a long way to go, but the Capitals want to help him get there. It’s unlikely Washington is going to stage a full-fledged rebuild while Ovechkin’s chance to catch Gretzky remains in sight.

That’s beside the point, though. Washington’s window as a Stanley Cup contender is rapidly closing. There’s still hope for a turnaround if the Capitals can identify what’s limiting their offensive opportunities — beyond injuries or puck luck — and get back to their dominant roots.

Calgary’s summer packed in more drama than a season of “The Bachelor.”

Johnny Gaudreau left in free agency for Columbus. Nazem Kadri arrived via free agency to a team he once rejected. Matthew Tkachuk wanted out, and was traded for Jonathan Huberdeau and MacKenzie Weegar.

It was enough of a net-positive to saddle the Flames with high expectations for this season, particularly after winning the Pacific Division last season. Their 5-1-0 start proved those expectations weren’t misplaced.

Then, the wheels fell off a bit with an 0-5-2 stretch that had Calgary tied in mid-November with the same record as those lottery-winning hopefuls in Chicago. The Flames have been rebounding since, but are right on the edge of being in playoff position.

Problems: The Flames wanted to keep both Gaudreau and Tkachuk. Who wouldn’t want a pair of 100-plus-point scorers on their side? But GM Brad Treliving was confident he could replace those contributions with Kadri (coming off an 87-point campaign) and Huberdeau (115). It hasn’t panned out that way. During the Flames’ winless streak, they ranked 24th in goals scored (just 16 in seven games).

Huberdeau’s output has been particularly unimpressive, accounting for two goals and eight points in the 14 games prior to an upper-body injury he sustained earlier this month. Kadri, at least, had 15 points in his first 17 games. Everyone else took their time catching up.

Elias Lindholm had great success on a line with Gaudreau and Tkachuk last season, but was slow to rack up similar totals again, with three goals in his first 11 games. Andrew Mangiapane had a breakout season in 2021-22 that hasn’t translated to his three-goal effort thus far. The scoring depth that carried Calgary’s offense before hasn’t had the same impact, which could partially be due to a lack of chemistry within a new group of players still feeling each other out.

Those are the Flames’ issues up front. Their goaltending has been a larger problem. Jacob Markstrom was undeniably elite last season, earning a league-high nine shutouts, second-team All-Star honors and the second-most Vezina Trophy votes. Markstrom’s numbers through 14 games this season: 7-4-2, .887 SV%, 3.11 GAA. Backup Dan Vladar has been worse (1-3-0, .881 SV%, 3.33 GAA).

Granted, Calgary ran aground with some defensive injuries — notably to Oliver Kylington, Chris Tanev and Michael Stone — but like any good Darryl Sutter-coached group, Calgary does well limiting shots against (28.1 per game, fourth fewest). It is not doing as well in keeping those shots that get through out of the net.

That could be a factor in why the Flames start games well (scoring the fourth-most first-period goals) but can’t close out (getting outscored 20-11 in the third period).

Solutions: Calgary’s roster went through an extreme makeover. Adjustments were inevitable. Now the Flames have to push forward.

Reliable goaltending is Priority 1. The Flames reeled off three wins in four games following their drought, but Markstrom’s stats in those games (.873 SV%, 3.44 GAA) were still troubling. That must improve.

Some of Sutter’s changes offensively already seem to be paying off. Lindholm’s line with Tyler Toffoli and Adam Ruzicka has been a particularly effective combination, leading the Flames with a combined 11 goals and 22 points at five-on-five since Nov. 1.

What Calgary requires is bottom-nine contributions and more input from its defense. The Flames managed just four goals from defenders in November, while forwards like Blake Coleman, Mikael Backlund and Dillon Dube haven’t been showing up on the score sheet as they were earlier. The Flames’ results should improve as the infirmary empties out, but Calgary won’t keep pace with the NHL’s best as a one- or two-line team. Overall, there is too much firepower on this team to think it can’t rebound in a hurry.

Vancouver responded so well to coach Bruce Boudreau taking over last season that it was assumed the Canucks would be even better this season with an established Boudreau, a healthy cast of characters and a seven-year contract extension for J.T. Miller to end his will-he-stay-or-go saga.

Then the season started.

Vancouver was 0-5-2 through seven games, scoring more than three goals in only one game and looking shellshocked nightly by each negative outcome. The Canucks have hit their mark here and there in November, but can’t seem to sustain any momentum.

Problems: While Miller’s narrative wrapped up in September, Boudreau’s was just beginning. Team president Jim Rutherford came out amid the Canucks’ early slide to retroactively criticize Boudreau’s training camp for its lack of intensity and to call out the coach for not preparing his players enough to open their schedule on a five-game road trip. It’s the kind of conversation that usually leads to a change behind the bench — only Boudreau is still there, with a dark cloud over his future. That sort of energy doesn’t breed confidence in anyone. It can do the opposite.

Vancouver has had enough to contend with elsewhere. The Canucks’ ongoing struggles with their defensive zone coverage and defending off the rush has put them near the bottom of the league in shots allowed (33.2 per game) and goals against (3.89 per game).

Quinn Hughes has been shaky early on without Luke Schenn — who is off to a much better start — by his side. Thatcher Demko‘s play in net is particularly baffling given his past success. The Vancouver netminder had a 2-8-0 mark through 12 starts, with an .884 SV% and 3.77 GAA. The Canucks have left Demko out to dry with too many cross-seam passes and odd-man rushes allowed, so it’s not entirely on him. Many of the Canucks’ early problems might be traced to their defense and goaltending instability.

Offensively, the Canucks have fared better. They’re a top-10 offense, but their scoring is also top-heavy. Just four players — Miller, Bo Horvat, Elias Pettersson and Andrei Kuzmenko — have tallied more than four goals this season, and only Pettersson has a double-digital point total at even strength. When considering that, Vancouver’s No. 26 ranking in goal differential (minus-9) begins to make more sense.

Vancouver’s fourth-ranked power play (29.7%) has been an asset in generating scoring chances. But the team’s 31st-ranked penalty kill (65.0%) can erase an advantage just as fast. That could be a microcosm for the Canucks as a whole. Highs and lows. Ebbs and flows. Great starts in the first period that lead to disappointing finishes. It’s not how Vancouver drew it up. So what can they do about it?

Solutions: Boudreau — and the Canucks at large — deserve a resolution. Is Vancouver all-in with its coach? Can Rutherford give him a Dorion-esque stamp of approval and let everyone breathe easier? At this point that might go further than attempting to bring on another fresh voice (again).

Then, it’s time for Demko to get going. He had a season-best 37-stop outing against Los Angeles last week that should give him and the team a needed boost. Brock Boeser also had a vintage performance that night, potting his first two goals of the season.

There are other reasons for optimism, too. Ilya Mikheyev is back from injury and put up nine points in his first 15 games. Horvat has been one of the NHL’s hottest scorers, and is leading by example with a strong two-way game that — with more followers behind him — should help slow some of the Canucks’ defensive woes.

Vancouver must do something about the state of its penalty kill, too. The Canucks allowed at least one power-play goal in all but three of their first 18 games. Hughes hasn’t had the same PK success as he did last season, and Demko’s downturn hasn’t helped, either. More from both of them will make a difference.

It’s all about the buy-in for Vancouver, and trusting this team can get somewhere despite a disappointing start. Victories like the one in L.A. could be a jumping-off point. And the Canucks can only go up from here … right?