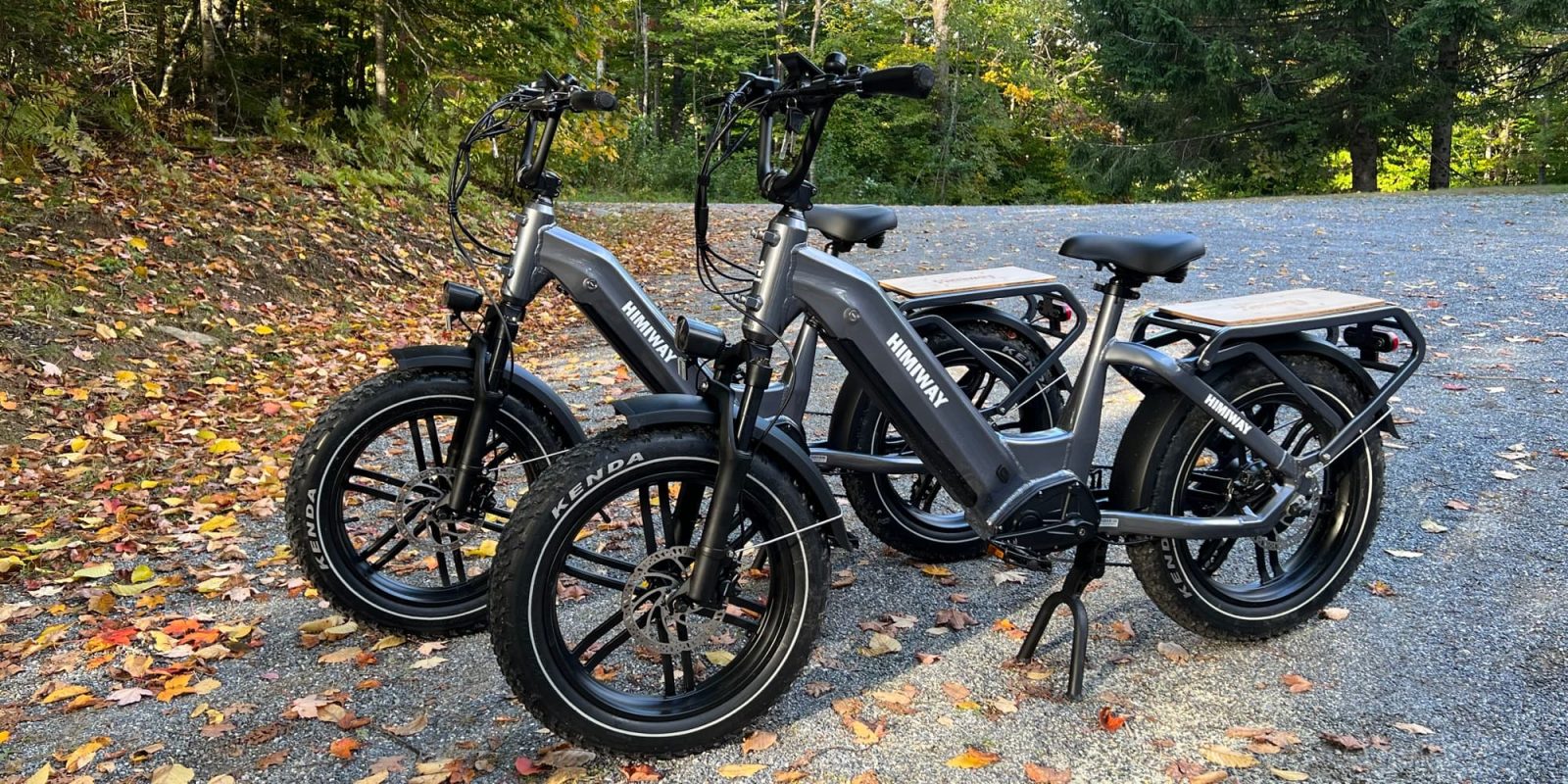 The Himiway Big Dog is a new “cargo” bike from Himiway, a popular electric bike brand that has expanded its product line considerably over the last year. While I’m not sure this bike qualifies as a true cargo bike by most definitions, it’s definitely a fun little utility e-bike that cruises more like a mini-moped.

My wife and I had a blast testing out a pair of Himiway Big Dogs on a recent trip to Vermont, where we soaked up the fall weather and enjoyed cruising on powerful electric two-wheelers.

Check out our experience in the video below:

Fun, powerful, and comfortable too!

We only had the bikes for a couple days, so I wasn’t able to do as in-depth testing as I normally do, but even in just a few days we still got to really enjoy these e-bikes and get a sense of what they’re made of. And while these aren’t high-end e-bikes like fancy $4,000 electric cargo bike options, there’s a lot to like.

Sure, there are pros and cons to the Himiway Big Dog just like most e-bikes. But there are enough of the former to outweigh the latter in most cases.

Let’s get those downsides out of the way first. The bike is quite heavy, weighing in at a hefty 79 pounds (36 kg). And it’s not just they’re heavy — the bike is also bulky. I only had to carry the two Himiway Big Dogs up three or four steps each day, but it was a doozy. The bikes are fairly long and the big hub motor puts that weight quite rearward. It’s doable, but it’s not at all like picking up a smaller e-bike.

Next, the pedal assist is quite surge-y. I’m not sure if that’s the best word to describe it, but it really comes on with quite a surge of power.

In fact, that’s why I consider these to be more of a moped-style e-bike. With that hand throttle at the ready and plenty of power on tap, it’s hard to fight the temptation to ride them like a moped where the pedals are largely for resting your feet.

If you do want to pedal, you certainly can. But just be prepared that the cadence sensor isn’t forgiving, so the bike really takes off with just a bit of pedal spinning.

Those were the two things that ruffled my feathers about the bike. After that, the Himiway Big Dog testing was pretty much all downhill from there, and lead to several days of smile-filled riding.

The bike is quite powerful with a 750W motor. You can no longer unlock the 30+ mph speeds that Himiway used to give you, but 25 mph or so is still possible. Since my wife and I were mostly pleasure riding, we didn’t really use the top end of the speed range too often. It’s there if you need it though, and I know several of my readers are speed demons so there you go.

The bike is also quite comfortable to mount, especially for shorter riders. My wife is 5’3 (160 cm) and she enjoyed how the seat can be set much lower than most other e-bikes that I try to force her to test out with me. It still raises up higher for taller riders, but the step-through design and low seat height option give the bike a wider range of rider heights.

I’m also a big fan of that big rear deck. The wooden platform looks slick, though it’s not quite as utilitarian as if it had more exposed bars for lashing down cargo or hooking bungee cords. Still, a flat platform is often better for boxes and other flat cargo, so some people will likely prefer it. Plus there’s the whole “ooooh, wood is prettyyyyy” effect, too.

Again, I’m not sure I’d call this a cargo bike like Himiway does, though the rack is certainly larger than we’ve seen on other utility-style bikes. And the Y-style double kickstand is also a nice addition for a “cargo” bike since it makes things more stable when you’re loaded down with cargo or kiddos on back.

The Kenda tires aren’t anything special, but they’re nicely knobbied for the gravel-style riding we were doing. If you want to hit nature trails, the tires and front suspension will both have you set. And those mag wheels mean you never have to worry about spoke issues. Plus, they look pretty cool too.

Front and rear LED lights as well as included fenders make it a great commuter option, though even having lights on a bike you may use purely for recreational is still a nice safety feature.

That massive 48V and 20Ah battery means you can ride for a really long time. We didn’t even charge the bikes throughout the two days we used them — there was just no need. If you’re pedaling too or just going easy on the throttle, you’ll get several days of use on a single charge.

I’m glad to see parts like hydraulic disc brakes included, though they’re pretty much mandatory at the MSRP of $2,099. Even at the current sale price of $1,999, if you try to sell me a utility e-bike without hydraulic brakes then that’s going to be a hard pass from me.

I’d have loved to see some type of passenger package option for the rear. Bikes like the RadRunner and Lectric XP 3.0 have those, and they are super useful features for tossing a kid or even a small adult on back.

But I guess you can just do like my wife and I and get two bikes. Not the most economical solution, but it sure does make for a fun afternoon ride with your cycling partner on the bike lane of life!