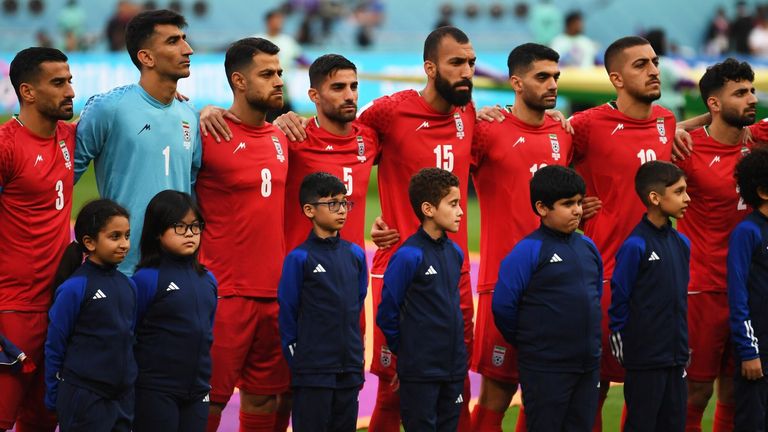 England won their World Cup opener against Iran – following a build-up that was dominated by a decision not to wear the OneLove armband, the taking of the knee and the Iranian players’ own silence during the national anthem.

But manager Gareth Southgate said after the 6-2 victory that he “understands FIFA’s situation” surrounding the ban.

He said: “It’s not something that myself or the players have been involved with over the last 24 hours.

“I do understand FIFA’s situation in that you can set a precedent and it’s very difficult then – where do you draw a line?”

The Three Lions ultimately took the knee before the match began, while Iran’s players stayed silent during the national anthem.

Read more: World Cup news – latest: ‘Tickets disappear from phones’ as fans struggle to get in stadiums; England ‘weak’ to back down on OneLove armband

That gesture risks more than just a sporting penalty – putting the Iran team firmly on the side of a wave of protests back home.

Widespread demonstrations have followed the death of Mahsa Amini, a 22-year-old woman who died in the custody of Iran’s morality police in September after being detained for alleged violations of the country’s strict dress code.

Iranian state television did not show footage of the players lined up for the start of the match.

Off the pitch, hundreds of fans trying to get into the Khalifa International Stadium were faced with delays after they found their ticket app only started working minutes before they reached the front of the queue.

Fans said their tickets suddenly disappeared off the app, leaving them unable to get into the game.

FIFA said it was “working on solving the issue” and urged fans unable to access their tickets on their phones to check their emails “for further instructions”.

One England fan said they should have “just used paper tickets” and criticised the organisation of the entry.

“We are waiting in line and the game’s about to kick-off. I won’t use any profanity… but spewing, absolutely spewing,” said another fan, who had travelled from Australia to the game.

Meanwhile, the Home Office has warned England fans in Qatar that they could face stadium bans in Britain for abuse or violence carried out in the country.

Harry Kane was due to wear the multicoloured OneLove armband during the side’s opening game, and Wales captain Gareth Bale the same armband promoting inclusivity when he leads his team out against the USA later at Al Rayyan Stadium.

However, facing the threat of an instant yellow card, a joint statement from seven European nations – including England and Wales – who had signed up to the OneLove campaign, earlier confirmed the armbands will no longer be worn.

They said while they were “frustrated by the FIFA decision”, they could not put their players “in a position where they could face sporting sanctions”.

A suspension is issued after two bookings in this tournament, meaning had either player been booked ahead of kick-off, they would already be walking a tightrope.

Kane instead wore FIFA’s No Discrimination armband as England started their campaign against Iran.

The teams said they were prepared to “pay fines that would normally apply to breaches of kit regulations” but “cannot put our players in the situation where they might be booked or even forced to leave the field of play”.

The statement added: “We are very frustrated by the FIFA decision which we believe is unprecedented – we wrote to FIFA in September informing them of our wish to wear the OneLove armband to actively support inclusion in football, and had no response.”

The story of the Qatar World Cup

The safety of migrant workers and the logistics of holding a football tournament in desert heat has also attracted negative attention.

The decision is another late one, following on from FIFA’s U-turn on alcohol sales – banning beer at the tournament’s eight stadiums, with the exception of those in corporate hospitality at venues.

The Football Supporters’ Association for fans in England and Wales, then criticised the decision, warning: “If they can change their minds on this at a moment’s notice, with no explanation, supporters will have understandable concerns about whether they will fulfil other promises relating to accommodation, transport or cultural issues.”

Today, the group issued a scathing response to the decision on armbands, saying: “We feel betrayed.

“Today we feel contempt for an organisation that has shown its true values by giving the yellow card to players and the red card to tolerance.

“Never again should a World Cup be handed out solely on the basis of money and infrastructure. No country which falls short on LGBT+ rights, women’s rights, workers’ rights or any other universal human right should be given the honour of hosting a World Cup.”