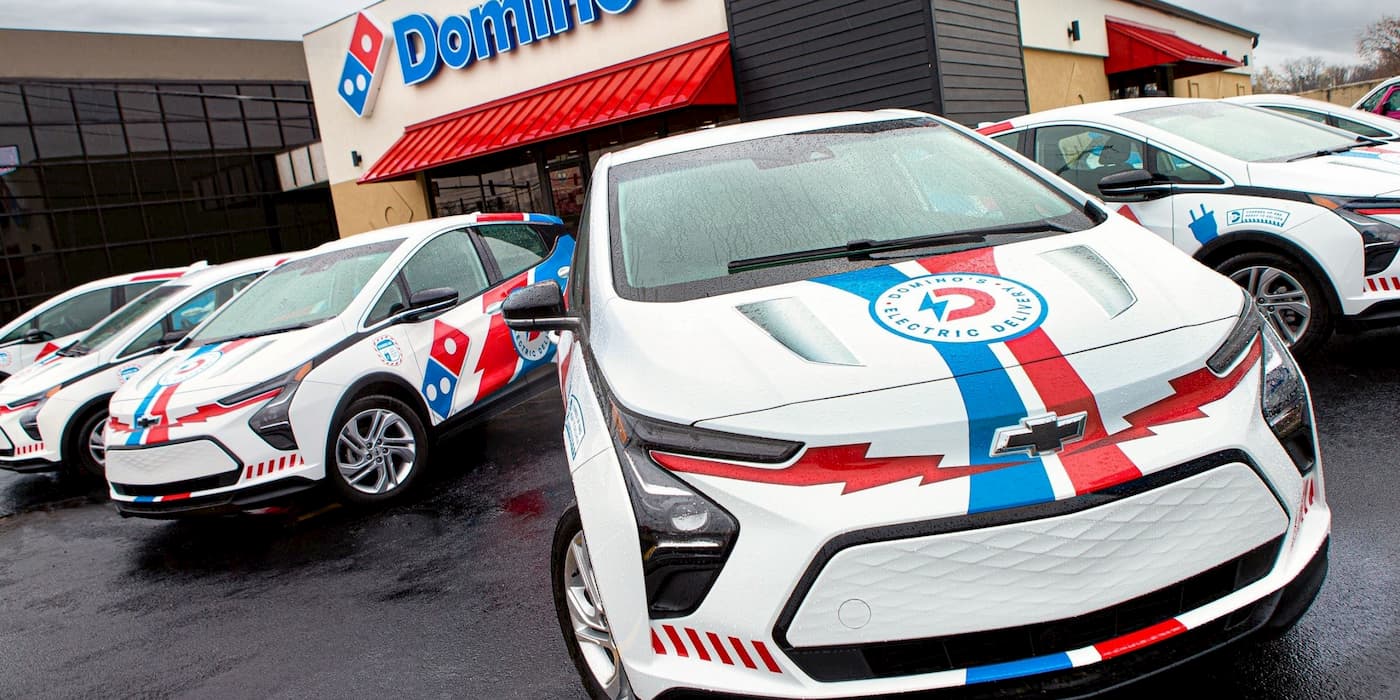 The world’s largest pizza company is going electric. Domino’s announced Monday it will be adding over 800 2023 Chevy Bolt EVs to its fleet, making it the largest electric pizza delivery fleet in the US.

In 2019, Domino’s ran a test program using custom electric bikes for pizza deliveries to reduce emissions and save on gas. As a result, Domino’s saw quicker delivery times and higher team member satisfaction.

The company expanded the program after proving to be a hit with delivery drivers and customers.

However, Domino’s is now taking its zero-emission ambitions to a new level. Domino’s says over 100 custom-branded 2023 Chevy Bolt EVs will roll out in the US this month, with plans to add an additional 700 over the next few months.

The company known for perfecting pizza delivery is now one of the first to implement EVs at scale. Domino’s launched pizza delivery in 1960 using a VW Beatle. In 2015, the company tested self-driving delivery and is now taking significant steps to reduce emissions, cut costs, and drive employee satisfaction.

Domino’s has always been on the cutting edge of pizza delivery and electric delivery cars make sense as vehicle technology continues to evolve. We’ve made a commitment to net-zero carbon emissions by 2050, and this is one way we can begin reducing our environmental impact, one delivery at a time.

With several advantages over their gas-powered counterparts, electric vehicles are quickly becoming more desirable for home delivery. For example, EVs have:

Perhaps, more importantly, Domino’s will help reduce its reliance on volatile gas prices that cut into profit margins. On top of this, EV fleets provide the opportunity to attract drivers who don’t own a car of their own.

Ed Peper, VP of GM Fleet, explains the benefits of the partnership, stating:

We’re excited that Domino’s has chosen the Chevrolet Bolt EV to build their electric pizza delivery fleet in the U.S. Both companies are committed to bettering our environment. GM plans to eliminate tailpipe emissions from new U.S. light duty vehicles by 2035. With an affordable price, fun driving characteristics, and a 259-mile range, the Chevy Bolt EV is the future of Domino’s electrified deliveries.

Interested in joining Domino’s with their EV rollout? The company is giving away the chance to win your own Chevy Bolt EV. See details here.

I could see Domino’s sparking a new trend as it rolls out Bolt EVs for delivery; it makes complete sense. Others will likely catch on as the company transitions toward zero-emission pizza delivery.

Domino’s is a first mover in the pizza market and is now implementing the largest pizza EV delivery fleet. With zero emissions, less maintenance, and superior safety features, the question becomes: Why not?