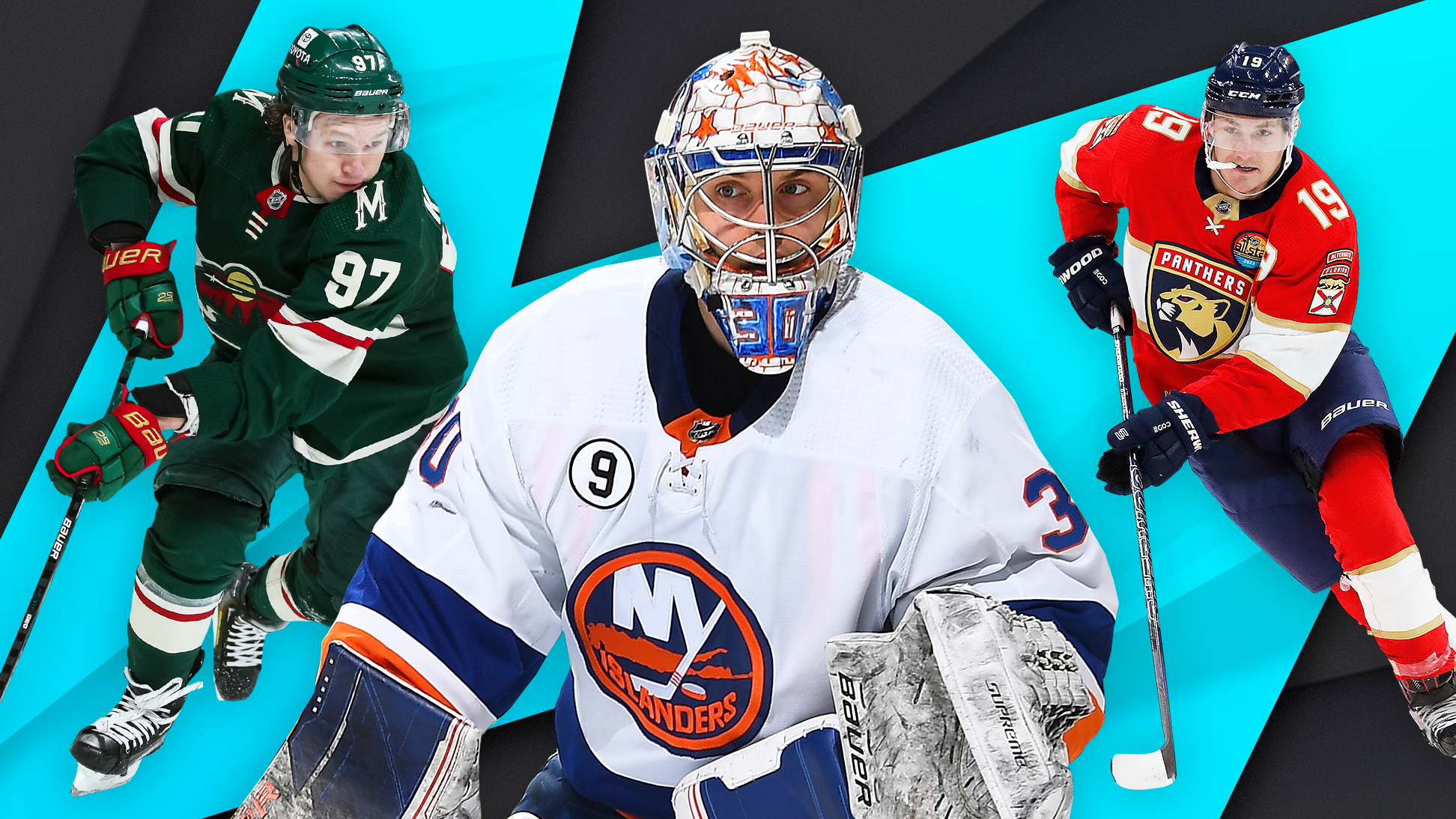 The quarter mark of the

Nikita Kucherov is earning plenty of accolades. The veteran wore an “A” this month for the first time in his nine-year career, proof he’s more than just the Lightning’s top sniper. Kucherov has the latter role down pat. First, there was the 11-game point streak, over which Kucherov netted 20 points. Then there’s the confidence Kucherov injects into each game, making the Lightning look dangerous even on their off nights. That’s a special skill.

Gabriel Vilardi has officially arrived. The forward is making up for lost time after years of injury issues as L.A.’s newest scoring threat. He was the first King to hit double-digit goals, has a monster 21.3% shooting percentage and is shaping up to be a dual threat who can drive play for L.A.

Adam Fox is excelling everywhere. New York’s top defenseman has the stamina to carry nearly 25 minutes per game while generating the second most points for his team this season. Fox’s ability to body skaters off pucks, manufacture rush chances and be a key playmaker adds up to inspired returns night after night.

Chris Tanev is putting in work. Seattle’s forward has excelled at both 5-on-5 (registering 10 points in 16 games) and been a top-end performer on the Kraken’s penalty kill. Tanev can be a menace almost anywhere, whether blocking shots or teeing up teammates in transition. Seattle has to hope Tanev can stay healthy enough to keep the good times rolling.

Connor McDavid remains otherworldly. Edmonton’s captain led the league with 15 goals and 32 points through 17 tilts and continues to create more highlight-reel-worthy moments per night than he averages points per game. Which is a lot. Rinse, repeat, for the two-time Hart Trophy winner.

Ville Husso came as advertised. Detroit needed a No. 1 netminder, and Husso fits the bill with standout performances, key stops and solid numbers. It’s rare for Husso to give up a truly bad goal. The more support Detroit can offer Husso — from the hot sticks of Dylan Larkin and Dominik Kubalik especially — the faster these Red Wings could climb the standings.

Nazem Kadri won’t be stopped. The Flames’ center wields his unique blend of skill, speed, physicality and grit to pull Calgary into the fight each night. Kadri has been an offensive catalyst through his team’s ups and downs so far, remaining notably consistent with his 5-on-5 production and on special teams. Calgary needs more of that from everyone.

Jordan Binnington is back to being the Blues’ backbone. His recent 4-0-0 run came with a 2.25 goals-against average and .936 save percentage, and included a 45-save performance against the reigning Stanley Cup champions in Colorado. Binnington’s helped get St. Louis on stable ground following a rocky stretch of eight consecutive losses.

Marc-Andre Fleury can still steal a win. His tough start evaporated when Fleury reeled off a 5-2-0 record with .939 SV% into mid-November that sheltered Minnesota’s slow-moving offense (28th overall). The Wild couldn’t have asked for a better rebound from their goaltender — making it especially hard to see Fleury suddenly sidelined this week by an injury.

Jason Zucker goes hard every shift. Zucker is a trusted presence for the Penguins up front. He puts pucks in the net and feeds off his reenergized linemate — and fellow team MVP candidate — Evgeni Malkin. Zucker brings an infectious energy when the Penguins lack for it elsewhere.

Carter Hart is back on track, after well-documented struggles in recent campaigns. The young goaltender has held Philadelphia above water despite all manner of inconsistency in front of him. Hart’s 6-2-3 record with .929 SV% at the mid-November mark was hard-earned through several terrific individual performances. Hart always gives the Flyers a chance.

Filip Forsberg plays well with others. The Predators have had trouble finding the right mix up front, but Nashville’s scoring leader elevates just about anyone. That provides the underwhelming Predators with some stability and hope that their offense can keep bouncing back and find its form.

Alex Ovechkin is fun to watch. The Great 8’s milestone hunt is the most engaging part of this Capitals’ campaign (so far, anyway). And along the way there’s been dazzling dangles, pretty passes and timely tallies to push Washington towards its full potential.

Nick Suzuki takes his role seriously. The Canadiens’ captain leads with passion and makes the most of offensive opportunities. He and linemate Cole Caufield have enviable chemistry that’s produced a landslide of goals to power Montreal through an unexpectedly solid start. All the Canadiens could ask for is more, please.

Jake Sanderson has turned heads. The 20-year-old is helping anchor Ottawa’s blue line through its crush of injuries — and disappointing start — with hard-nosed effort and strong defensive skills that reflect how he’s maturing before the Senators’ eyes. Sanderson gamely took on more minutes as well with Thomas Chabot sidelined. He’s a beacon for Ottawa’s back end.

Rasmus Dahlin is growing towards stardom. He’s honed reliable defensive details, and is an elusive puck-moving playmaker with high-end vision and a terrific first pass that can quickly put Buffalo on the attack. The early Norris Trophy noise Dahlin generated? Well-deserved.

Bo Horvat is leading by example. Vancouver’s captain can’t quiet all the outside noise, but he can keep scoring at an alarming rate (14 goals in 17 games), playing good defense and offering the Canucks a blueprint on how best to battle through their many challenges.

Jonathan Toews is back on track. Chicago’s captain hasn’t played this well in years, pacing the Blackhawks in goals (seven) through 16 games and boasting an eye-popping 65.4% face-off winning percentage. That elite skill alone can swing momentum in Chicago’s favor, and puts Toews’ game-changing abilities repeatedly on display.

Clayton Keller is elite. It’s one thing to be the stimulant behind Arizona’s even-strength offense. But Keller has also shaped the Coyotes’ dominant power play into a behemoth that’s ranked top five in the NHL (29.6%). Regardless of where Arizona plays, count on Keller to create something worth watching.

Erik Karlsson‘s name is trending — in early Norris Trophy buzz, and trade rumors — so he must be doing something right. The revitalized blueliner is San Jose’s best asset on both sides of the puck, hitting 10 goals and 24 points in 18 games amid 25-plus minutes of average ice time. The Sharks limit 5-on-5 scoring chances and shots against demonstrably better when Karlsson is on the ice. No surprise he’d be an attractive trade target — though with full trade protection it’d have to be the right situation.

Johnny Gaudreau brings fans out of their seats. That cannon is loud, after all. Columbus’ top-line winger produced six goals in his first 15 games as a Blue Jacket — each one scored at home. While Columbus has weathered mounting injury problems and sub-optimal results, Gaudreau’s talents remain on display and give Blue Jackets’ faithful something to cheer about.

Trevor Zegras deserved better. Amid a not-so-fun season for the Ducks, Zegras continues to dominate with first-rate talent and skill that produced another Michigan-style lacrosse goal this month — which was called back upon offside review. Terrible. But that doesn’t diminish Zegras’ prowess or how it’s something to stay hopeful about in Anaheim.

Inside the Devils’ breakout: The factors that have led to 11 straight wins
Hossa wants more active role with Blackhawks