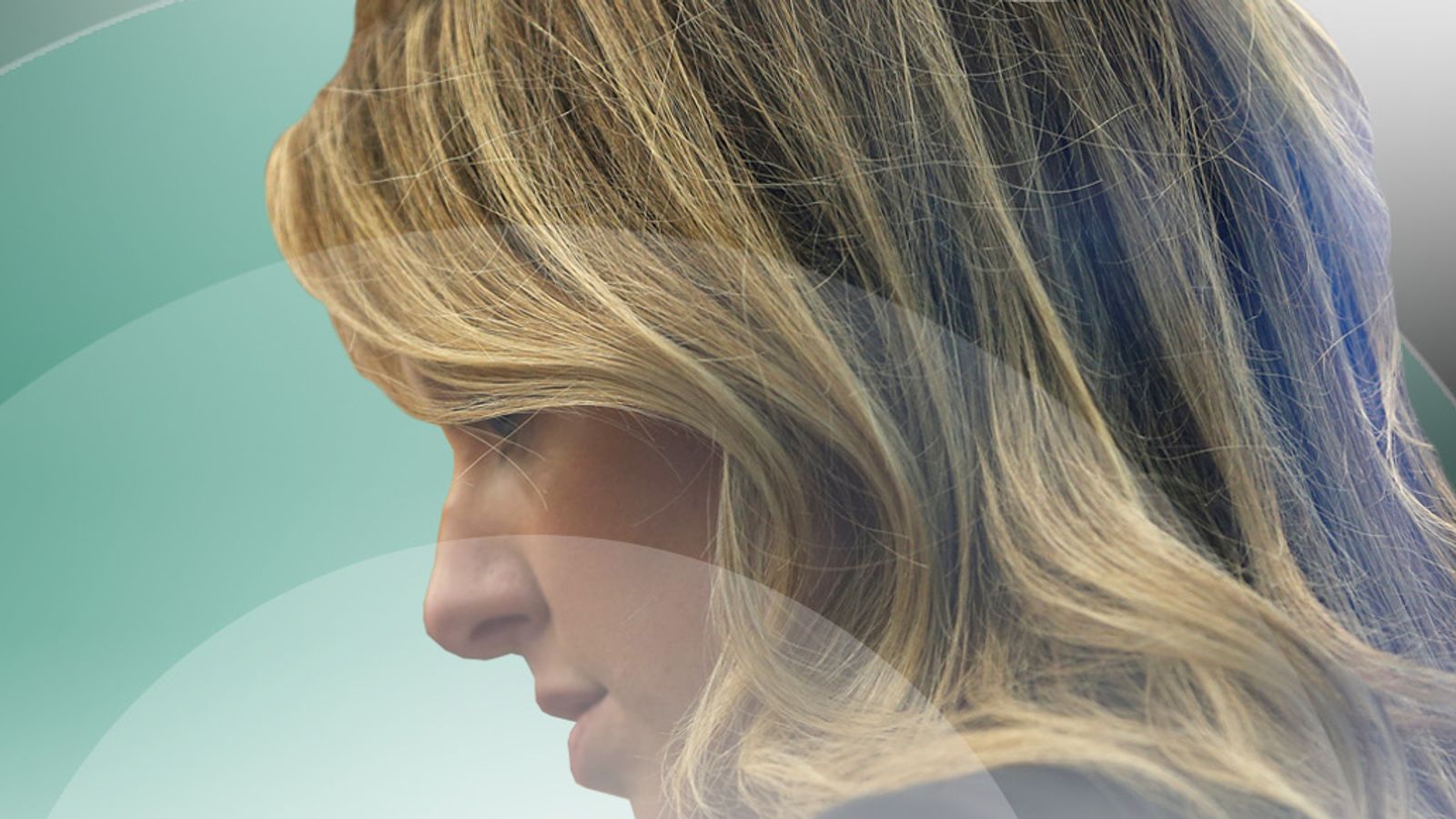 “Don’t worry about the future, we’re in good hands.”

So said former US president Bill Clinton in 2015, as he introduced Elizabeth Holmes to an adoring New York crowd.

It seemed an uncontroversial statement at the time, as he hailed the achievements of a woman who had become America’s youngest self-made female billionaire after taking Silicon Valley by storm.

A hub for the world’s biggest tech companies, the only thing more synonymous with this infamous stretch of northern California than scientific breakthroughs and innovative gadgets were the rich white men who were invariably behind them – turtleneck jumpers and smart trouser-sneaker combos in tow.

Holmes – a high school computer whizz turned Harvard dropout – was a bona fide gatecrasher, her stunning rise to the cover of Forbes magazine powered by her founding health technology firm Theranos and its rapid ascent to a peak valuation of $9bn. Look back on what it was promising to deliver, and it’s easy to see why.

Revolutionary blood tests were at the heart of its pitch, ones which could be performed at phenomenal speed with merely a small drop required – and no needles.

Holmes’s catchphrase became “change the world”, such were her assertions that the equipment her company had developed could test for dozens of diseases in one fell swoop.

She insisted it would change healthcare in the US, not just by speeding up and streamlining trips to the doctor, but by eventually rendering such visits obsolete by selling the gizmos in stores.

It took more than a decade for such claims to be exposed as the stuff of science-fiction, but Holmes’s shameless willingness to talk the talk regardless helped her become one of the darlings of Silicon Valley, raising hundreds of millions from investors and venture capitalists.

As Theranos grew, her public image was crafted to perfection to make her the perfect face of one of America’s most exciting companies, famously adopting the aforementioned turtlenecks from her idol Steve Jobs, the late Apple founder, and speaking in a strikingly deep voice which added extra gravitas to her every word.

Fame isn’t for everyone, but for Holmes it seemed elementary.

Nothing, it seemed, could go wrong. Until it did. Big time.

How the lie was exposed

Holmes’s empire began to unravel upon the publication of a bombshell expose by The Wall Street Journal, which reported that Theranos’s technology was profoundly flawed.

The devices used to collect people’s blood, which the firm dubbed “nanotainers”, were said to be so far off the mark that Theranos had in fact been using other companies’ equipment to carry out blood tests in its laboratories.

The most distressing piece of the Journal’s report was that the company’s ex-chief scientist, Briton Ian Gibbons, had tried to take his own life after telling his wife the tech did not work. He died shortly after from liver failure.

The stories emerged just a month after Holmes had shared the stage with Bill Clinton.

As described by Sky’s Ian King when Theranos went bust in 2018, three years after the Journal’s report, key to the company keeping the wool fixed firmly over the public’s eyes until then had been an almost cult-like culture among its executives and staff, and one of extreme secrecy.

Neither are unique to Silicon Valley – some of the big tech personalties who have emerged over the years remain an odd focus of worship in some corners of the internet – but rarely have they combined to such destructive effect.

The journalist who broke the story, John Carreyrou, has since written a book on the scandal called Bad Blood, which stands to be turned into a feature film. There’s perhaps a cruel irony that it’s being produced by Apple, the company whose late co-founder was a source of such inspiration for Holmes.

Her rise and fall also inspired a hit podcast series called The Dropout, and a subsequent Hulu series of the same name starring Amanda Seyfried.

The show presents Holmes as a brave, smart, single-minded young woman determined to succeed, and she is initially easy to root for. As Apple designer Ana Arriola tells Holmes in a scene when she attempts to recruit her following the launch of the first iPhone: “Honestly, it’s just really exciting to me that you’re a young female CEO, instead of a cocky little boy in a sweatshirt.”

But Holmes’s goal of becoming a wealthy star of the biotech scene quickly overcomes all other instincts – including a willingness to tell the truth.

It’s a trait that left some staff feeling deeply uneasy, not just Gibbons and Arriola, who describes her time at Theranos on her LinkedIn page as “altruism through corrupt unethical science-fiction”.

How a life unravelled

Carreyrou’s revelations, which Holmes has admitted trying to silence, sparked investigations by medical and financial regulators in the US. In a development which would once have been unthinkable, the now 34-year-old was facing criminal charges in 2018.

Among those defrauded investors were the likes of Rupert Murdoch and the American pharmacy giant Walgreens, while similarly big names had been attracted to Theranos’s board of directors.

Among them were former secretaries of state Henry Kissinger and George Shultz, and an ex-director of the US Centers for Disease Control.

All of them had been hoodwinked by Holmes, who had founded Theranos aged just 18 and quickly learned how to tell her backers exactly what they wanted – and she needed them – to hear.

As Eric Jackson, a startup founder and author of The PayPal Wars, put it to Sky News: “There is almost endemic to the system a need to, I don’t want to say exaggerate, but to tell a narrative that’s compelling to investors. At a certain point hype does have to be in line with credibility, if not you’re in an instance of good old-fashioned fraud.”

Whether it was a matter of delusion, falling victim to the treacherous “fake it ’til you make it” culture that permeates American startups, or something more sinister, Holmes maintained during her trial that she initially believed her company’s purportedly revolutionary blood tests were real.

“I wanted to convey the impact the company could make for people and for health care,” she told the court of her meetings with investors.

To prosecutors, such assertions were the consequence of a woman who was “out of time and out of money”.

Having launched her company by repurposing family funds meant for her Harvard degree, taking it mainstream meant doing whatever it took to attract her big time investors and venture capitalists.

The once-enamoured former US secretary of defence Jim Mattis, who joined the company board, told the trial: “There just came a point when I didn’t know what to believe about Theranos any more.”

‘She chose lies when we needed truth’

Holmes’s sentencing on Friday to more than 11 years in prison comes after she was convicted of fraud earlier this year, her years-long scam having failed to move the jury as it had done her backers.

After a case which gripped the world, just as her rise to fame had done, US federal prosecutors had asked the judge to jail her for 15 years, a term considered appropriate for “one of the most substantial white collar offences Silicon Valley or any other district has seen”.

Balwani has been left waiting until next month for his sentencing, having also been convicted of multiple fraud counts during a separate trial.

In a 46-page brief last week, assistant US attorney Robert S Leach wrote of Holmes: “She repeatedly chose lies, hype, and the prospect of billions of dollars over patient safety and fair dealing with investors.

“Elizabeth Holmes’ crimes were not failing, they were lying – lying in the most serious context, where everyone needed her to tell the truth.”

A counter document from Holmes’s attorneys, totalling 82 pages, insisted her reputation had been permanently and unfairly destroyed, given it had turned her into a “caricature to be mocked and vilified”.

They appealed for a sentence of no more than 18 months.

More than 130 friends, family, former investors and employees have also submitted letters to the judge, Edward Davila of San Jose, California, to appeal for leniency.

Senator Cory Booker used his to hail Holmes, still only 38, as someone who “can, despite mistakes, make the world a better place”.

Whether that’s true or not, she won’t be able to from behind bars.